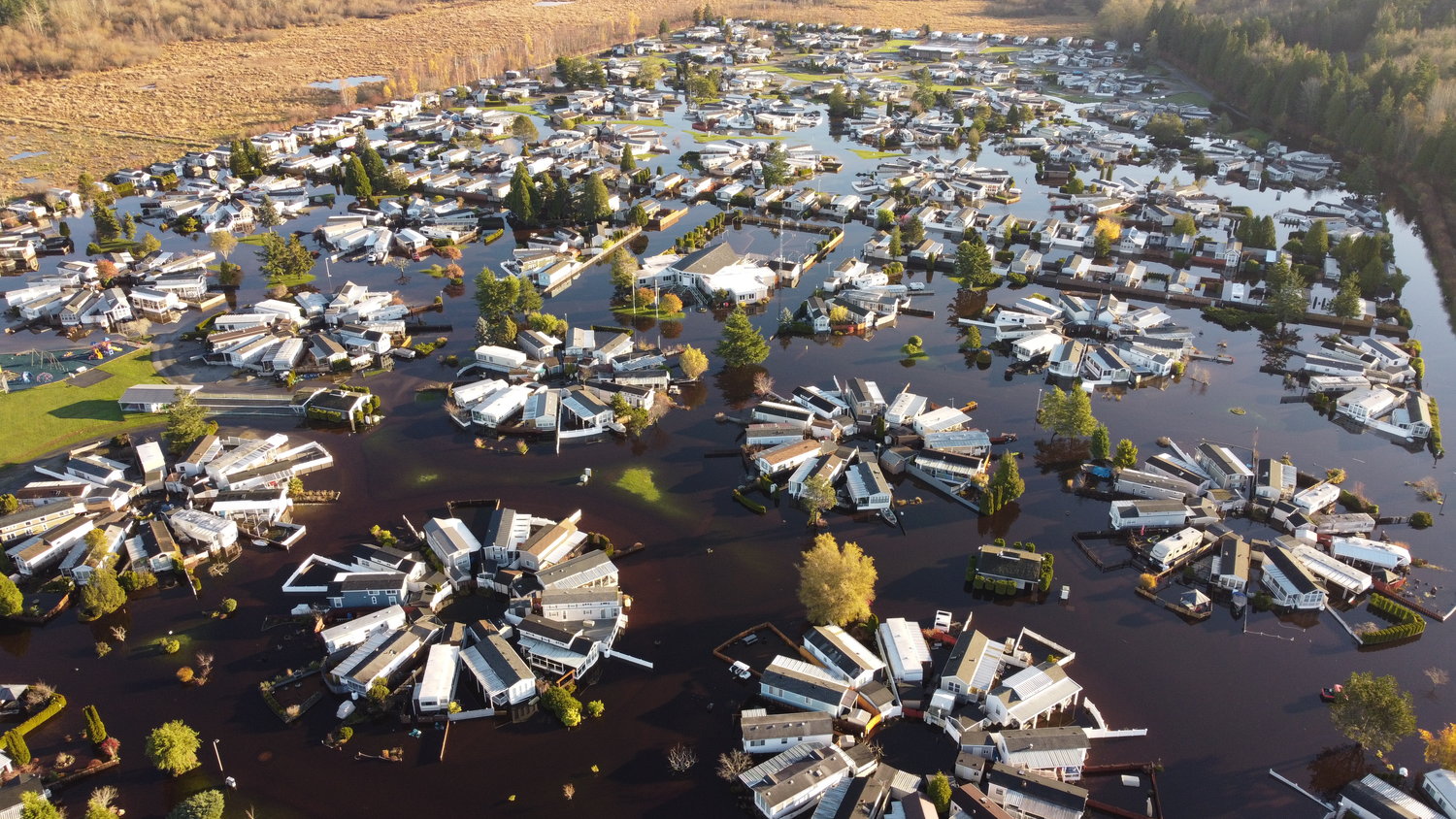 November 15 flooding forced evacuations at Birch Bay Leisure Park on Birch Bay Drive. At least 20 residents in the 718-unit seasonal park were evacuated by park maintenance crews and as of November 21 were unable to return to their homes while the park continued to assess electric and sewer impacts. Photographed is residual water on November 19.
Photo by Christopher Ramirez
Posted Tuesday, November 23, 2021 4:21 pm
By Grace McCarthy

Whatcom County officials and community members are working around the clock to assess the full impact of catastrophic floods that washed over Whatcom County a week ago, while more damage has been discovered since the storm hit November 14-17.

Collateral damage is being assessed, including impacts to Whatcom County farms. Flood impacts to a Sumas grain producer that supplies about 80 percent of western Washington dairy farms could hurt milk supply, said Jed Holmes, community outreach facilitator for the Whatcom County Executive’s Office. EPL Feed in Sumas was severely flooded, impacting equipment and grain, and is unable to get supplies by train because of the BNSF Railway train track damage after several train cars derailed last week.

EPL, which produces grain to feed dairy cows in Skagit, Snohomish and King counties, needs to maintain their feed distribution or else dairy farmers won’t have the right mix of food which could result in their cows’ lactation could stop, Holmes said. Dairy farmers need the grain supply running again before hitting a crisis point, which Holmes said differs for each farm depending how much grain supply they have left.

The Whatcom County Sheriff’s Office (WCSO) Division of Emergency Management is brainstorming a solution, which may mean a Ferndale grain producer working as a substitute in the interim. Holmes said BNSF may have the tracks repaired that lead to the Sumas farm Wednesday, November 24, but it will take time to transport the raw products sitting in Everett.

“You can’t just snap your fingers,” Holmes said. “There’s a lot of congestion in the supply chain.”

The body of Everson resident Jose Garcia, 49, was found by law enforcement personnel in the 600 block of Main Street at 1 p.m. November 17. Garcia had been missing since November 15, when he was swept away by the flood on his way to work.

The Lummi reservation became an island as all roads were closed at one point during the flood. By the morning of Friday, November 19, Haxton Way and Slater Road reopened. Lummi Nation police boats reportedly transported emergency services and medical staff between the reservation and mainland.

Meanwhile in Blaine and Birch Bay, floods forced evacuations at Birch Bay Leisure Park on Birch Bay Drive the morning of November 15. The park was still closed as of November 21 after it was swamped up by 4.5 feet of water.

“It’s been a lot of a waiting game. Waiting for the water to go down, to make sure the sewer systems are good,” park manager Lisa Fisher said. “Staff has been here 24/7 to clear drainage ditches and get stuff that’s flowed down.”

The park’s maintenance staff evacuated about 20 residents who were stranded with dump trucks, Fisher said. The park doesn’t have a total on the number of people who evacuated the 718-unit season park, she said. Those who evacuated are staying with friends or in a hotel while the park remains closed for crews to assess whether the sewage and electric systems are safe.

Water had receded to 4 inches in the deepest part of the park. Fisher said she hasn’t seen flooding to this extent since the late ’70s.

While the park remained closed to volunteers by press time, Fisher said people who want to help can call the office at 360/371-7122.

Aside from Birch Bay Leisure Park, Birch Bay WCSO deputy Derek Jones said Birch Bay was spared from the severe flooding. A few vehicles needed to be towed after venturing past closed road signs around North Enterprise and Willeys Lake roads near Custer, he said. To his knowledge, WCSO didn’t assist with any Birch Bay evacuations or rescues.

Residents in the 8600 block of Semiahmoo Drive lost parts of their backyard during a flooding-induced cliff collapse on November 15. Lorri Garske said she lost at least three feet of land behind her bushes, while next-door neighbors had a road to their house made impassable by an average vehicle. “Who’s going to pay for all of this damage?” Garske asked.

The city of Blaine public works department closed Yew Avenue between Pipeline Road and Hughes Avenue on Monday, November 22 after the flood eroded the side of the avenue. City manager Michael Jones said public works believed a small stream caused the collapse. The city will assess damage and create a repair plan, but expects the avenue to be closed for the foreseeable future. The city is not concerned about any other roads, he said.

The city of Blaine also has not received claims from property owners concerned the city played a role in any of their flood damage, Jones added.

Drayton Harbor Oyster Company announced on its social media that it wouldn’t serve oysters until around December 7, after heavy rainfall and overflowing sewage shut down shellfish harvesting for at least three weeks.

The oyster company is required to close its shellfish harvest in Drayton Harbor for one week if the area receives more than 2 inches of rain in a day, which Blaine exceeded. But the company was requested to shut down three weeks after the Lighthouse Point Water Reclamation facility became overwhelmed and sewage leaked onto Marine Drive. The restaurant will still be serving other seafood until oysters are back on the menu, co-owner Steve Seymour said.

Drayton Harbor shellfish harvesting also closed for three weeks when sewage leaked near Blaine High School in the summer 2020, Seymour said, adding that Blaine public works does a great job operating its sewer plant. “It’s a fact of life when we farm in an urban population,” he said.

Across the border, the B.C. government began rationing gas and putting restrictions on nonessential travel November 19 because of damage to highways and Trans Mountain pipeline. The Canadian government is working to increase gas supply by truck and boat.

The new emergency order limits B.C. residents in several areas including Lower Mainland and Vancouver Island to only buy 30 liters of fuel per purchase. The order will last until Wednesday, December 1.

The meeting will cover the extent of the flood; impacts to infrastructure, homes and businesses; debris management; and the planning permit process, according to a WCSO release.

“The pain these folks are in right now is considerable,” governor Jay Inslee said during a November 18 conference, the day after he toured Whatcom County. “But they are remarkably resilient and we’re seeing the spirit of that county.”

Inslee said the state didn’t yet know if damage met the level needed for federal assistance, but said they would aggressively request money. He said it was important for residents and business owners to record their damage, not only for themselves, but for the state to request federal assistance.

The governor also said he spoke with a Federal Emergency Management Assistance (FEMA) administrator about potential for president Joe Biden to declare a disaster, as well as the state’s request of ‘strong consideration’ for individual assistance and housing assistance for those impacted by the floods. Inslee hopes to soon distribute cash to families and is looking into short-term shelters and housing.

Detailed inspections of the worst-hit areas from flooding were scheduled Monday, November 22 to Wednesday, November 24, a needed first step in assessing the financial impact of damages and requesting FEMA money, according to WCSO.

The Emergency Management Division of the Washington State Military Department was scheduled to conduct detailed inspections alongside county officials in Nooksack, Everson and Sumas. Two teams of three state and two local representatives will assess damages.

“The teams will be validating and confirming the data that communities have already collected as well as evaluating additional damages which have yet to be reported,” John Gargett, deputy director of WCSO Division of Emergency Management, wrote in a news release.

Residents don’t need to meet with the assessors. WCSO is asking people who haven’t reported damages or don’t know if their property has been assessed call 360/788-5311 and leave their name, address and damage.

A makeshift debris site at 3010 Halverstick Road in Sumas was set up for residents whose homes or businesses had been flooded. The WCSO is asking for people to sort household hazardous waste at the staffed site, open daily from 8 a.m. to 4 p.m.

More information on volunteering or getting help if impacted, visit whatcomcounty.us/flood.