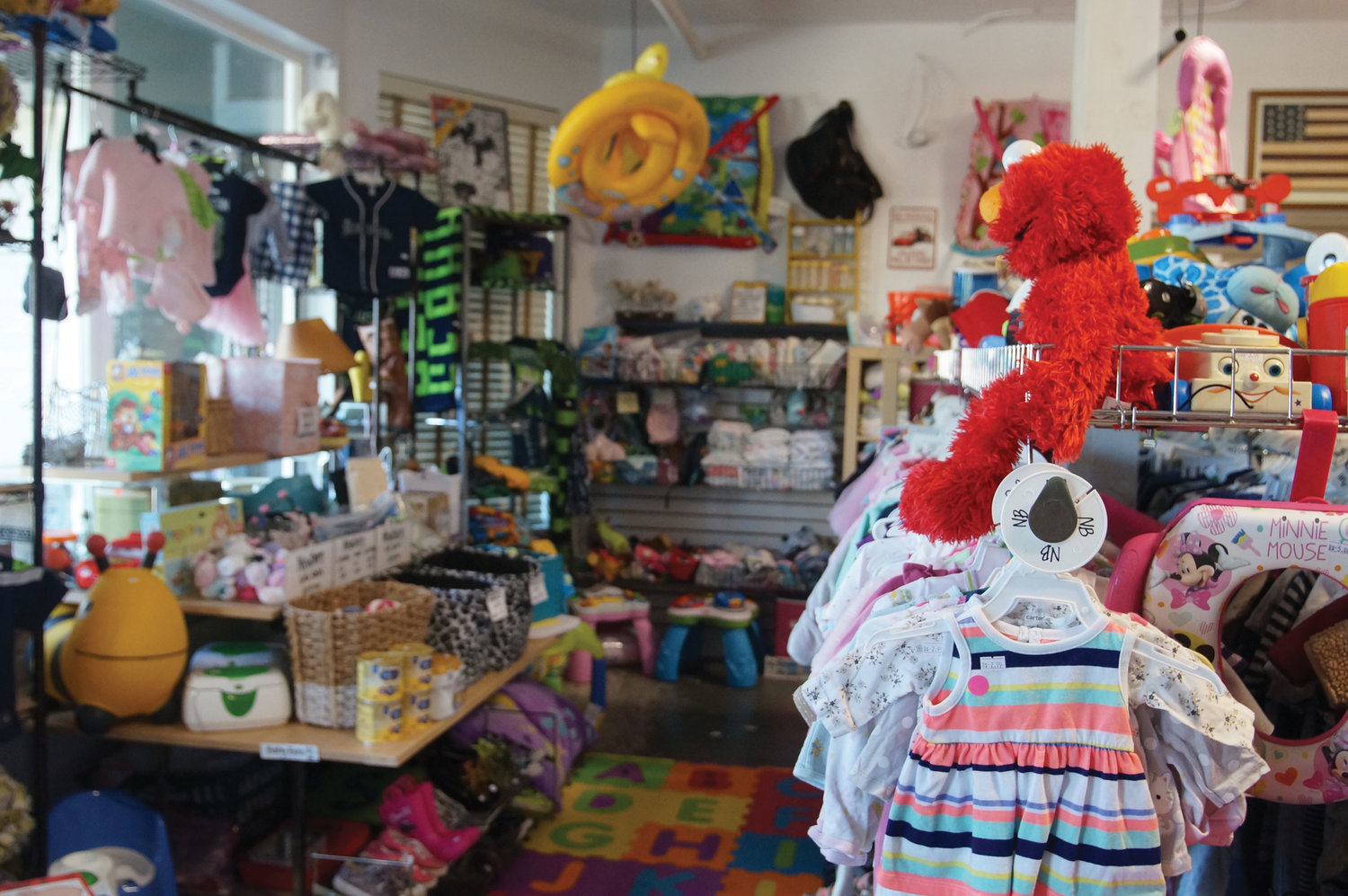 Inside Third Time’s A Charm Thrift, at 4823 Alderson Road, in Birch Bay.
Photo by Grace McCarthy 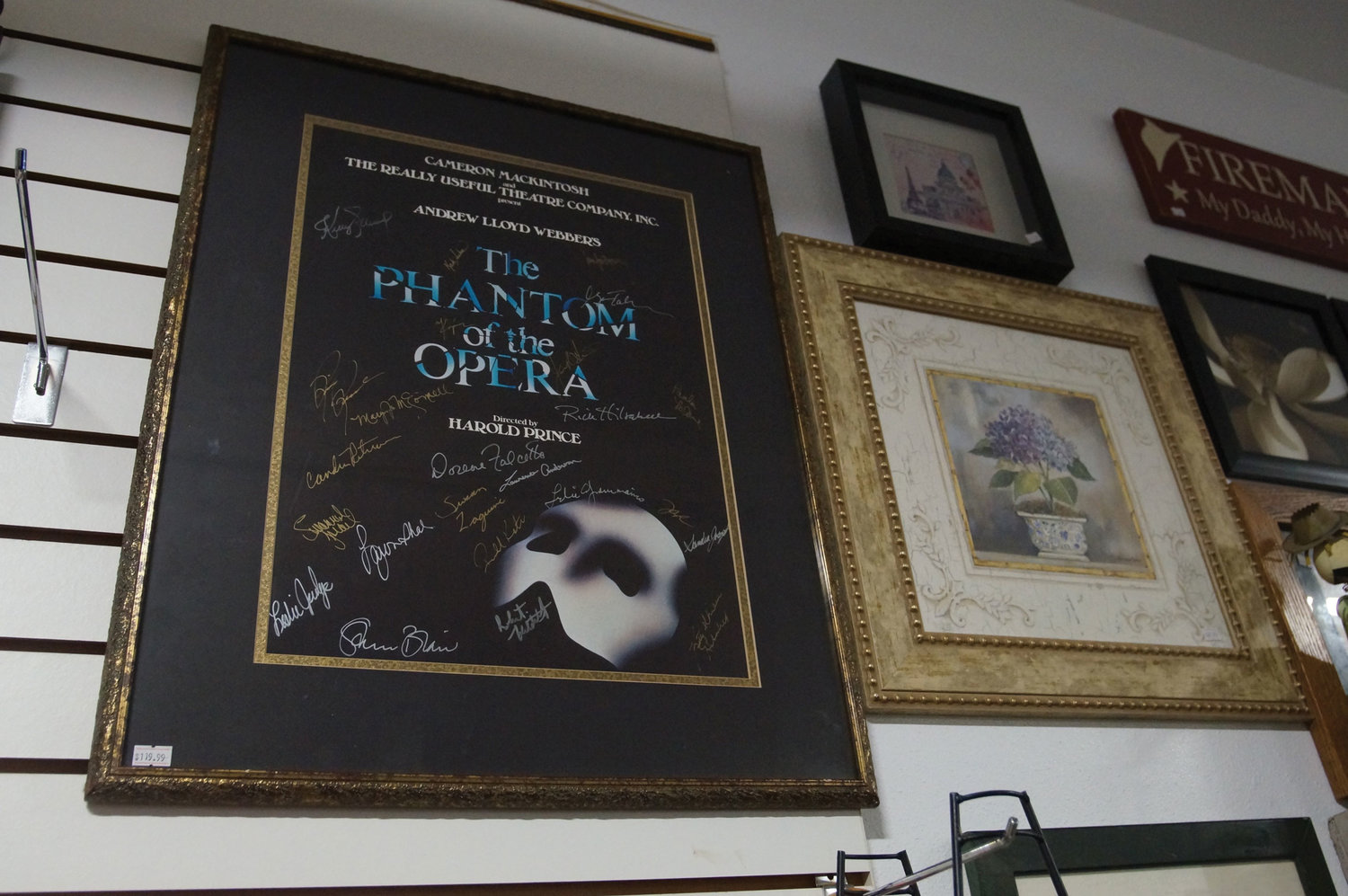 A Phantom of the Opera poster signed by the Broadway cast at Third Time’s A Charm Thrift, in Birch Bay.
Photo by Grace McCarthy
Previous Next
Posted Wednesday, September 16, 2020 2:37 pm
By Grace McCarthy

Opening a thrift store was never on DeAna Kirscheman’s radar as a business venture. But when she moved to Blaine in April, she was left with boxes of items that needed a new home. After selling all of her items to neighbors, she began a second-hand pick up service in June and by August 21, she and her husband, David Kelly, opened Third Time’s A Charm Thrift in Birch Bay.

“The idea came up in April and by the end of May I was like, ‘Alright, this is what we’re doing,’” Kirscheman said. “It was born out of necessity.”

The store, located behind the C Shop at 4823 Alderson Road, sells discounted second-hand goods – everything from a $120 Phantom of the Opera poster signed by the Broadway cast to children’s clothes and furniture.

Kirscheman manages the store and facilitates in-store and online sales while Kelly helps with the store’s marketing and donation pickups. About 60 percent of sales are on Facebook or eBay, Kirscheman estimates.

Kirscheman grew up in Ferndale and worked as a restaurant manager at several local restaurants, including Semiahmoo Resort, where she found her love for the Blaine area. Although she said she’s sad to leave the restaurant industry, she’s excited to channel more creative freedom toward her Birch Bay store.

“I like this area a lot,” Kirscheman said. “It’s very relaxing. People are friendly and seem to help each other out. It’s nice they can support business growth during this really, really tough time for businesses as so many people are closing their doors.”

Kirscheman hopes Third Time’s A Charm will become a weekly stop for the Birch Bay community, where people can browse items she restocks daily from her free donation pick up service. The service, which Kirscheman started after seeing a need for doorstep donation pickup, runs in Whatcom County on Sundays and Mondays. Residents are asked to set their items outside before 9 a.m. so Kirscheman can do a contactless pick up on her route. All donations are accepted except books, mattresses and furniture. Donations are not accepted at the store, unless they’re prearranged.

“It’s a way to showcase more community because this is all donation-based,” she said. “This is all meant to go to another place to be loved.”

Kirscheman said she wants to upsize in the next couple years to allow her thrift store room to grow but right now she’s focused on learning how to balance her work and home life with two four-year-old daughters.

Opening the store has given Kirscheman the opportunity to show her daughters how to create something from nothing,
she said.

“We’re lucky to have been able to do this as a family,” she said. “That’s how we made sense of having such a large time investment, is having our girls here with us and letting them see that you can build something for yourself.”

Through the process, Kirscheman said she found a love for rehoming other people’s junk to become another’s treasure.

“There’s never ever a guarantee with anything in a thrift store,” she said. “It’s literally all a treasure hunt and that’s the best part of it. You know someone else doesn’t have it, and if they do, it’s few and far in between.”

Third Time’s A Charm is open Tuesday-Saturday from 10 a.m. to 5 p.m. For more information on the business, visit its Facebook page, bit.ly/2FE94Jy, or call 360/746-4466 for information on donation pickup.

This article has been updated to reflect new store hours.