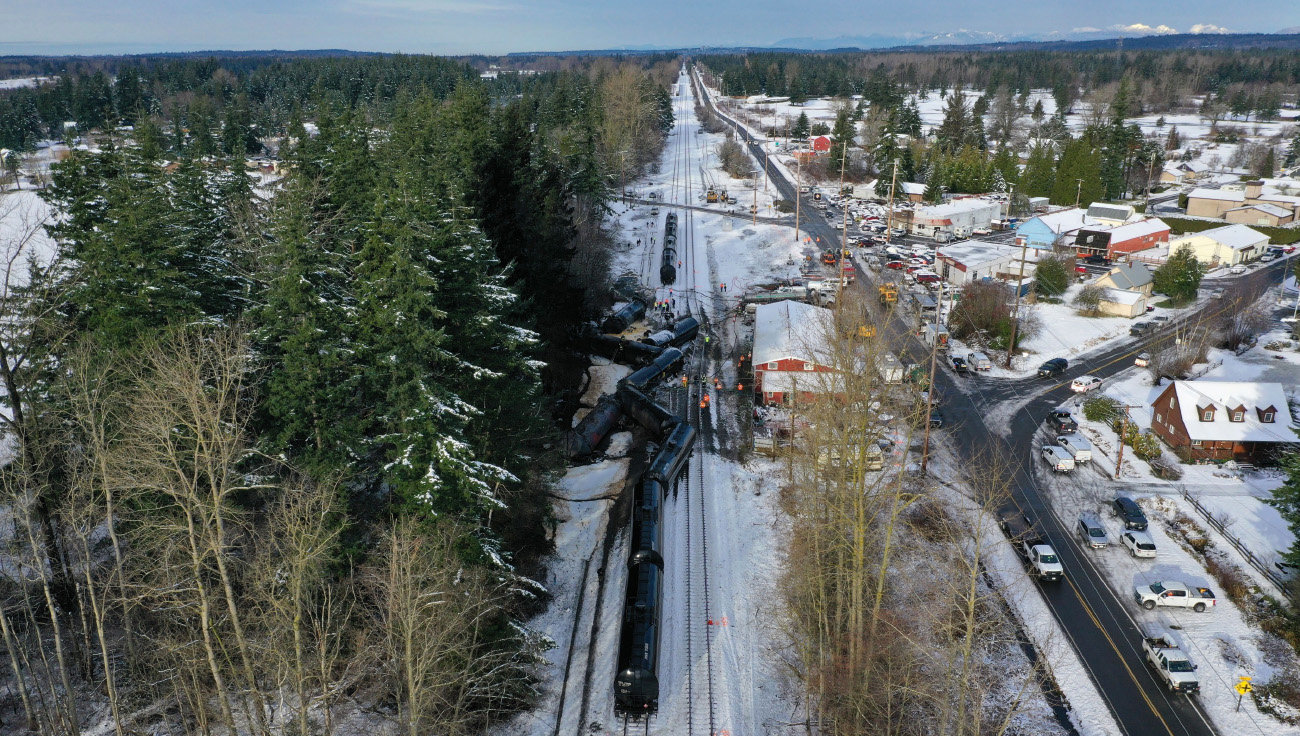 Investigators are considering vandalism as a likely factor in the Custer train derailment December 22, 2020, according to a Federal Railroad Administration (FRA) report released September 9.

The report did not determine a cause for the derailment. The FBI is still investigating.

The 108-car train was carrying highly flammable Bakken crude oil from North Dakota to the Phillips 66 oil refinery in Ferndale when 10 rail cars left the track around 11:40 a.m. Fire burned into the night, forcing the evacuation of 120 people and shutting down I-5 for four hours. No injuries were reported.

The derailment occurred less than a month after two Bellingham women were arrested for tampering with BNSF tracks in north Bellingham. FRA released its report September 9; the same day one of the Bellingham women was convicted in federal court for one count of violence against a railroad carrier.

The FBI announced in November an investigation into over 40 shunt placements, which can derail trains, in Whatcom and Skagit counties since January 2020.

In addition to vandalism, FRA cited three possible contributing factors in its September 9 report: BNSF not notifying crews of track vandalism in the area; BNSF didn’t follow federal requirements to secure the train before it was left unattended between crews; and the new crew did not properly check the train.

“In both instances, vandals had opportunities to tamper with the couplers and brake pipe angle cocks,” the report reads. “FRA’s investigation determined that two crews failure to comply with train check requirements established the foundation for this derailment.”

The report ruled out weather, crew fatigue and drug and alcohol use as factors in the derailment.

A crew from Everett left the train at a Custer substation unattended for nearly three hours before another crew arrived. The crew started the train northbound at 11:29 a.m.; the train derailed a half-mile away, near the 7500 block of Peace Portal Drive.

“… The unlocked coupler pins caused the train to separate, and the closed or partially closed angle cocks prevented the train from experiencing an emergency application of the air brakes upon movement,” according to the FRA report.

A Bonneville Power Administration security camera in Custer recorded the decoupled train in motion, separated between cars 64 and 65 in the 108-car train. Footage showed about 17 seconds of space between the two sections. The front section was traveling 7 mph and the back section was traveling 21 mph when the BNSF crew used the emergency brake.

The collision between the two ends of the train caused the cars to accordion and leave the track.

“Upon impact, the train experienced an undesired emergency application of the train brake system and came to a stop,” according to the FRA report.

The crew aboard signaled an emergency over the radio, to which the train’s brakeman, who was not aboard the train, responded he would pick up the conductor and investigate. Nearby crewmembers of another train radioed the crew to make sure they were OK and informed them of a smoke plume rising from the train, according to the report.

In June, the National Transportation Safety Board (NTSB) released a report detailing the accident and closed its investigation.

The NTSB report said the derailment caused estimated damages of more than $1.5 million. The railroad reported $751,880 in equipment damage and $100,000 in track damage in the FRA report.

Washington State Department of Ecology (DOE) reported responders recovered most of the 29,000 gallons of oil that spilled, leaving 5,400 to 8,000 gallons in the ground. A DOE spokesperson previously told The Northern Light oil contamination didn’t leave the derailment site and didn’t harm wildlife.

State senator Doug Ericksen (R-Ferndale) called for legislative hearings into potential sabotage in the Custer derailment. In 2017, Ericksen proposed legislation that would create longer sentences for people protesting illegally to cause economic disruption.

“Certainly, we must respect the right to peaceful protest,” Ericksen said. “But when protests cross the line and threaten injury, death and property damage, the legislature needs to acknowledge we have a serious problem on our hands.”