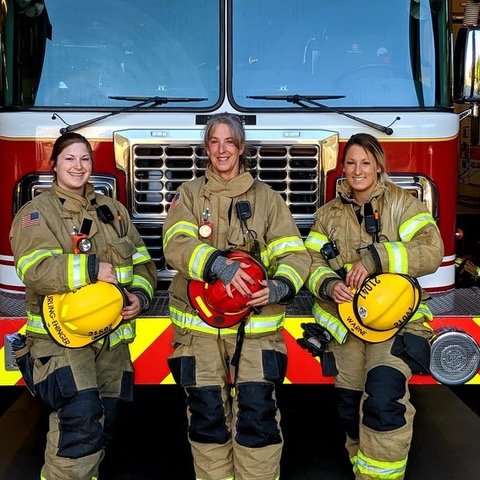 Lieutenant Leslee Smith retired from North Whatcom Fire and Rescue in October after 26 years of service, leaving behind a trailblazing career where she helped women see themselves in bunker gear and a red hat.

Smith, a B.C. native, spent the beginning of her career as a child care counselor in B.C. and a behavioral specialist at Blaine Primary School. While working with Blaine Fire Department at the primary school, Smith was encouraged to become a volunteer firefighter.

“It wasn’t something I got into so I could become chief one day,” Smith said. “My goal was to serve my community and become part of the community.”

NWFR chief Jason Van der Veen has known Smith since they volunteered at Blaine Fire District in the mid-90s, and started working with her at NWFR in 2007.

“She was really ahead of her time for women in the fire department, especially for a small department like us,” he said. “The fire service is starting to realize its lack of diversity. Former chief Fields promoting her as an officer changed the culture.”

“Traditional firefighting has been a male-oriented occupation and North Whatcom grew so much after Leslee was promoted to lieutenant. You had 50 young firefighters who came in and the norm was to be led by a female,” said Van der Veen, who has daughters of his own. “That’s not groundbreaking to them because Lieutenant Smith was there and she happened to be a woman.”

During her career, Smith said the highest number of women in the 50-person district was five career firefighters. Strength is the biggest concern Smith said she’s heard from women apprehensive about joining.

“You always have to figure things out in the fire service,” Smith said. “It doesn’t matter if you’re a woman who is 5’2” or you’re a guy who is 6’4.” If there’s a problem, the whole task of being a team is solving problems whether it’s someone’s medical emergency or a motor-vehicle accident.”

Smith said at times 911 callers have treated her differently. Although she said she’s had a great experience with her male colleagues, she has been questioned on her ability to do things while on duty like drive a fire engine.

“People say funny things when you go on calls like, ‘You brought the girl’ or ‘Great, you’ll have to call more people because she’s not going to be able to lift me,’” Smith said. “It’s funny how people perceive your capability as a female.”

To show young girls they could be firefighters, Smith said she was always eager to attend school fairs and encourage other female firefighters to join.

“Women and men need to see that representation in front of them because if they don’t see it, then it doesn’t exist,” Smith said. “It makes it harder to make those inroads to let them know they have those choices for careers. I never knew it was a choice when I was a girl.”

Many things stand out in Smith’s 26-year career including a scholarship foundation she helped start in 1998. Other memories that stand out to her are completing the annual Columbia Tower Firefighter Stair Climb twice in under 30 minutes, encouraging girls to get involved in firefighting camps training and helping deliver babies on the job.

Smith retired after nearly a decade-long battle with lung cancer. After being diagnosed and having surgery in 2012, Smith was cancer-free until the cancer came back in August 2020 and she started chemotherapy, requiring her to leave work. A surgery this September removed the cancer, but required Smith to retire early.

“I want to thank Leslee for her years of service to the community,” Van der Veen said. “I think the citizens of Blaine and north Whatcom are going to miss her without knowing they’re going to miss her. She has some really big shoes to fill.”