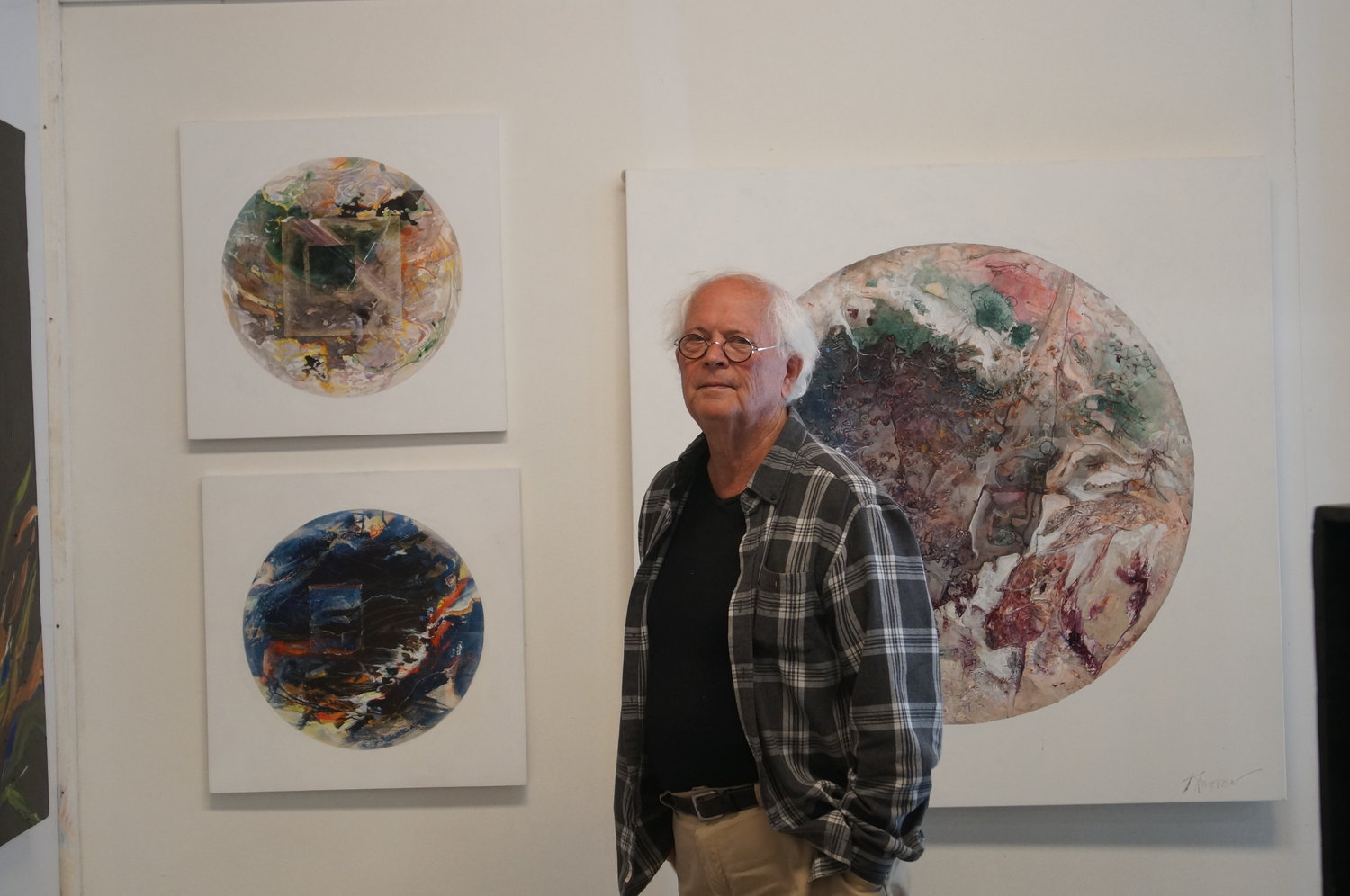 Joseph Kinnebrew stands in front of three abstract pieces from his “Celestina Novicum” series in his Birch Bay art studio on June 17.
Photo by Cameron Sires 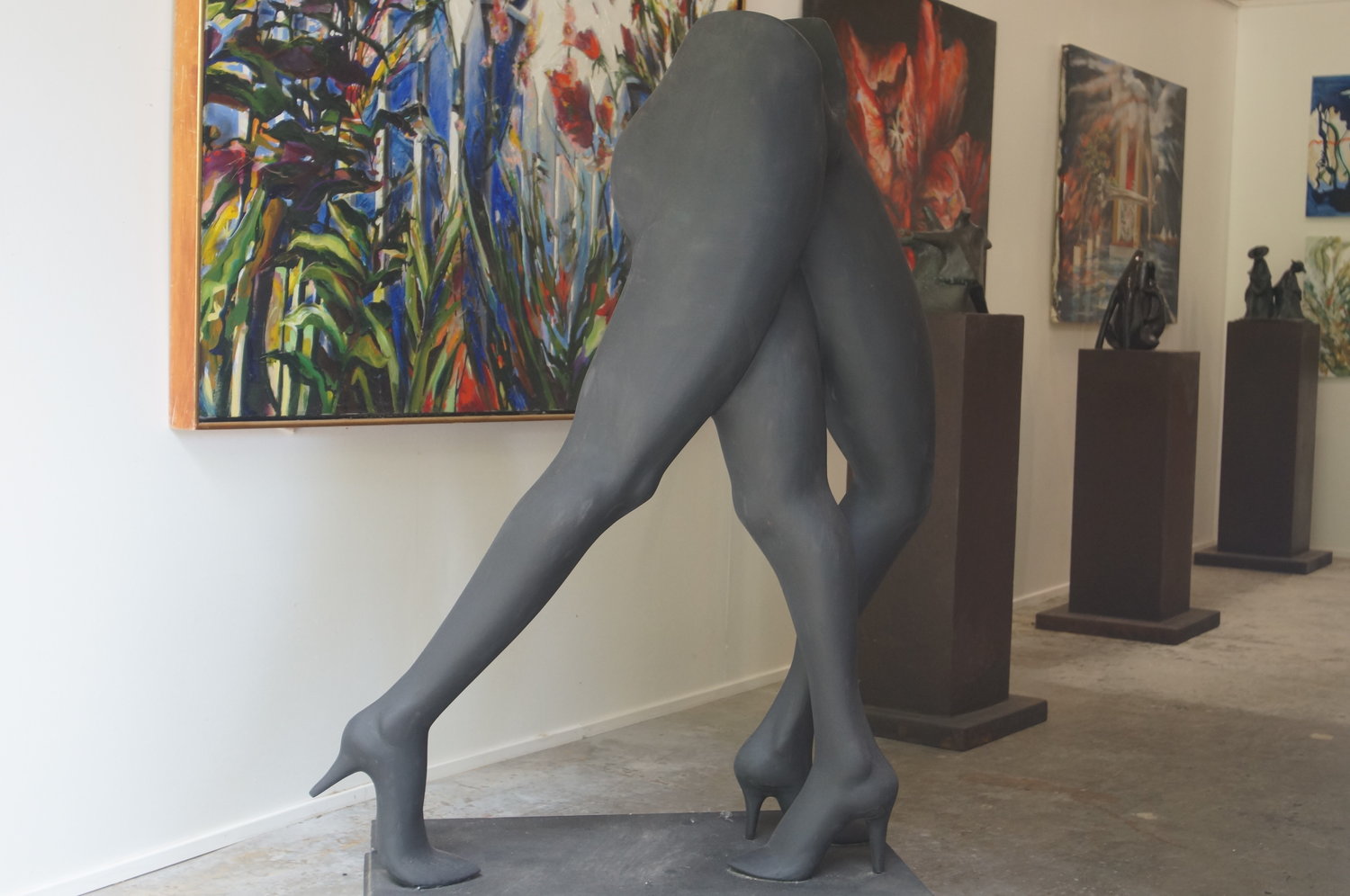 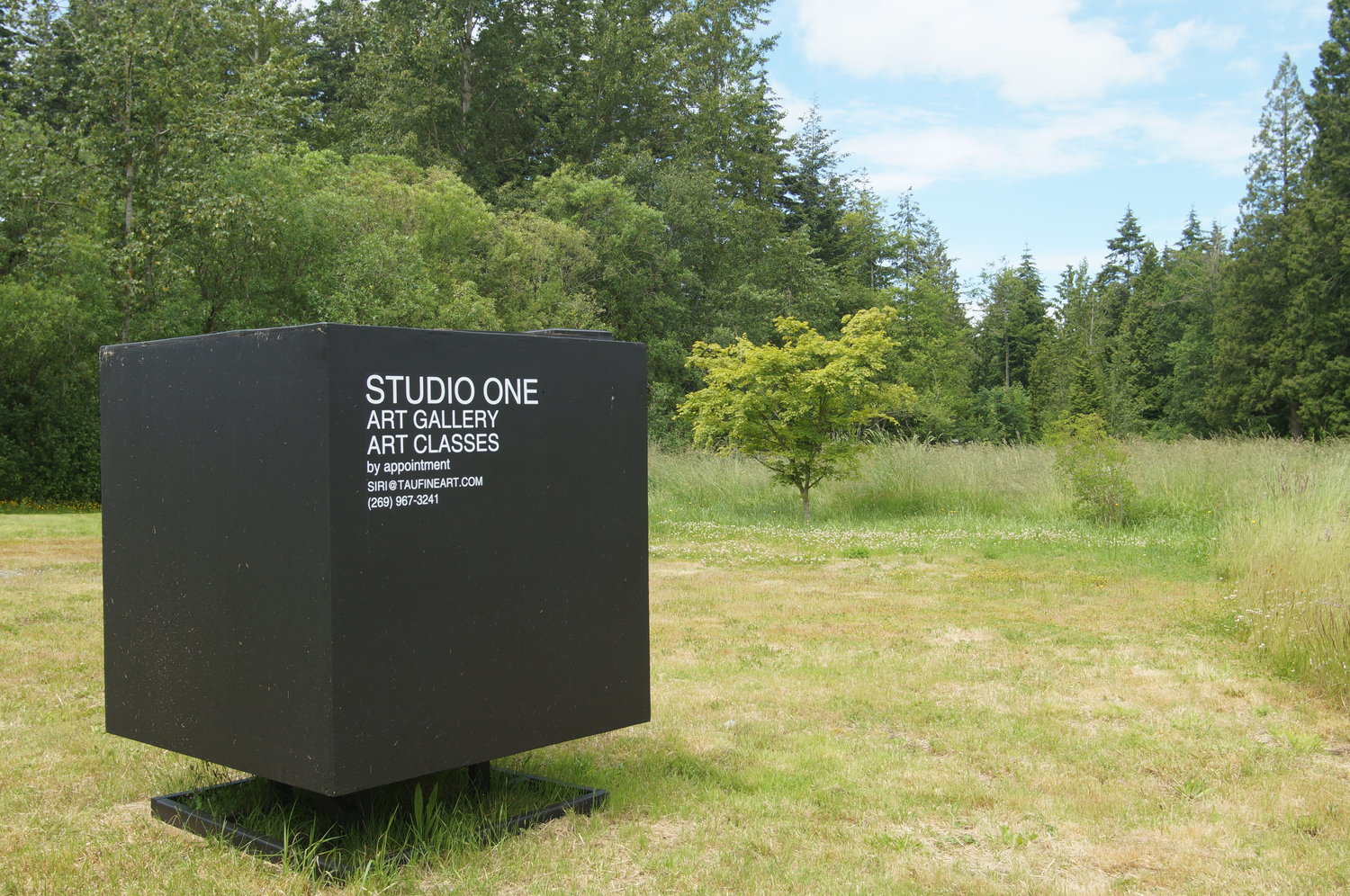 With the last Blaine by the Sea Art Studio Tour of the year slated for Saturday, June 25, an upcoming arts council seems promising to keep Blaine’s art scene on the rise. At the council’s helm is Joseph Kinnebrew, a nationally renowned artist who will display his art at the last studio tour.

Blaine Chamber of Commerce and Blaine artist Kay Dee Powell created a new Blaine by the Sea Art Studio Tour that has held a monthly event since April. On June 25, artists will welcome the public into their home studios, giving the community a chance to learn more about the artists and their work. Kinnebrew will be one of the featured artists allowing people to view at Studio One, his studio at 4294 Birch Bay-Lynden Road.

Kinnebrew works with a variety of mediums. He uses fabricated metal, cast-iron, bronze, wood and found objects when sculpting. Additionally, he creates digital collages, drawings with pencil and paint on canvas.

“There are some ideas that just can be painted. But other ideas need to be sculpted because of their scale and the dimensional qualities of it,” Kinnebrew said.

Kinnebrew’s art is represented internationally in over 32 museums, institutions, corporate and private collections. Additionally, Kinnebrew has earned 18 awards and nine grants, including from the National Endowment for the Arts (NEA) and Michigan Governor’s Award. Kinnebrew also writes, lectures, teaches classes, composes music, podcasts and writes newsletters for Tau Fine Art studio in Sun Valley, Idaho (strictly online because of Covid-19), previously owned a Caribbean resort, and is an avid gardener.

Kinnebrew said he originally was an abstract painter in the ’70s before focusing on botanical and surrealism painting.

“I enjoy painting botanical work, but my real passion is with surrealism. Surrealism is probably the most intellectual of all the painting styles, relying very heavily on symbolism. It’s a very heavy deal,” Kinnebrew said.

Kinnebrew returned to abstract painting in 2015, which resulted in a series called “Celestina Novicum.”

“I stopped doing abstract work because I felt, many years ago, it was too self-indulgent. It was too much of a conversation just with myself,” Kinnebrew said. “But my general feeling is that, for art to be the most authentic, that is the conversation that has to take place. Otherwise, you are painting for the population, you are painting to sell paintings.”

“The fish ladder was a very, very hard-fought political battle. I took on the state government. I eventually went to Washington, D.C., to get the federal regulations, to back it with federal law,” he said.

Kinnebrew said he received recognition in the centerfold of Fortune Magazine, several awards and more commission opportunities, but chose to focus on more personal work.

“Gradually, I was turning inward and paying less attention to the commission work, which can become very complicated and very time-consuming,” he said. “There’s a lot of politics involved in it.”

Kinnebrew said he had been active in the political art world while being a strong advocate for using public art grants for individual artists during a time when only art institutions were grant recipients. He has experience serving on several NEA and state committees, and has helped organize local art committees.

With his background, Kinnebrew saw potential in the Blaine and Birch Bay art scene and offered a lending hand to organize an art council. Kinnebrew discussed the idea of an art council to Powell, who helped found the Blaine art studio tour, and a week later a group was in his home discussing ideas on creating a more thriving art community.

“I support the art tour idea,” said Kinnebrew, who’s lived in Birch Bay since 2019. “That’s what started me down the path of trying to help them form an arts council.”

Until formal elections in September, the art council has an acting president, Powell, and seven executive committee members. Kinnebrew said he and Siri Struble, manager of Kinnebrew Studio, will be included in the council when they need new members. For now, they are officio members consulting the council.

Kinnebrew said he knows the importance of an art council getting active in government to achieve action.

“One of the first things I said to [the art council] as we all sat around this table is you have to get political. You have to go to the city council meetings,” Kinnebrew said. “You have to speak up and you have to make your point because they are not going to come and figure this out for themselves.”

Kinnebrew said he wants to support the art council and its effort to bring awareness to the artists and the growth of Blaine and Birch Bay.

“What most people don’t understand is the effect of the cultural environment of their community,” Kinnebrew said. “One of the reasons that cities put public art out there is that it immediately and visually says something to a visitor, a newcomer to that community, about the quality of that community.”

For more information on the art studio tour, visit blainebythesea.com/arttour.