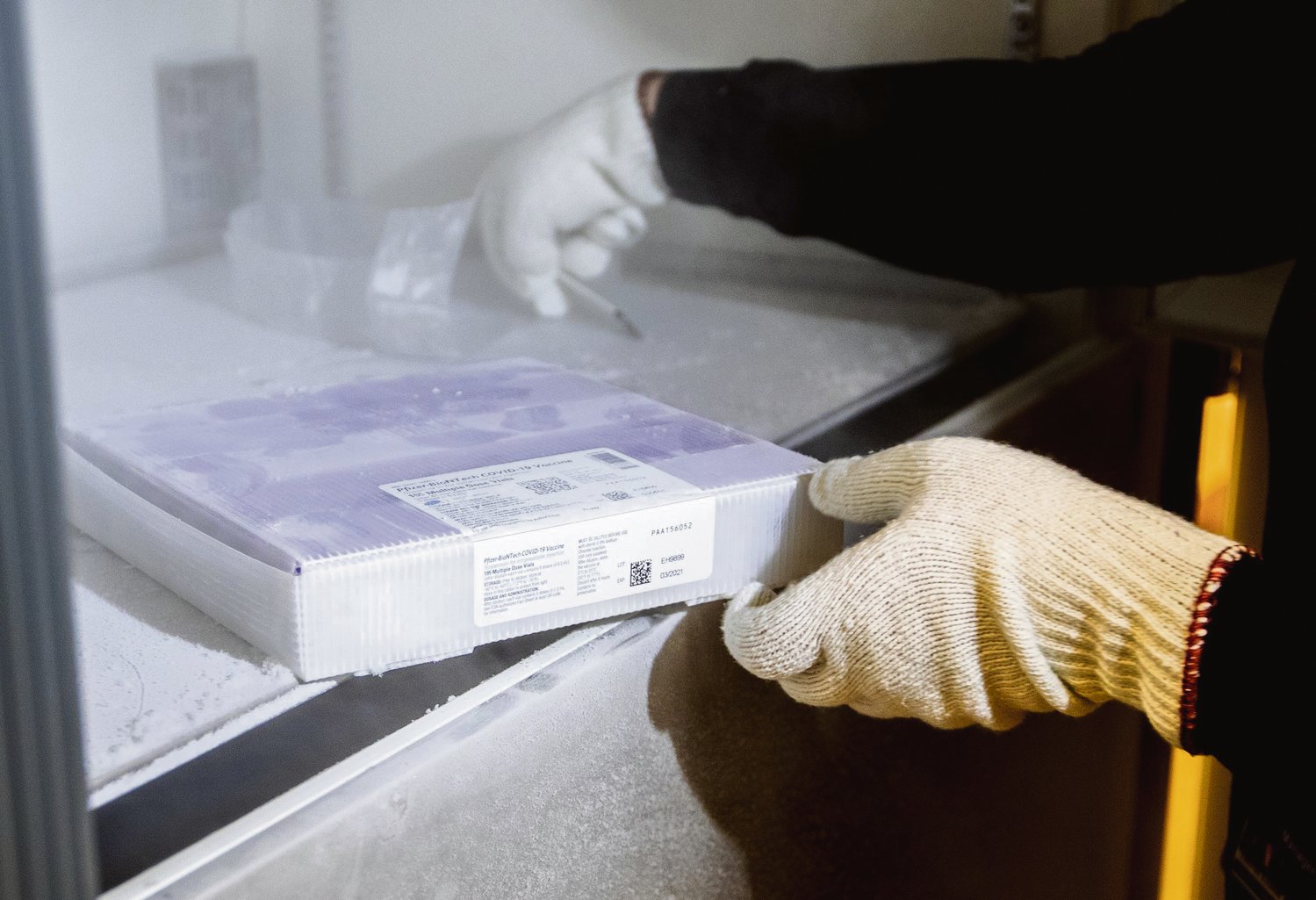 WA DOH POOL PHOTO - UWMC Pharmacy Manager Christine Meyer puts a tray of 975 doses of Pfizer’s coronavirus vaccine into the deep freeze after the vaccine arrived at UW Medicine’s Montlake campus Monday morning, December 14, 2020. These are among the first to be distributed in Washington state...A total of 3,900 doses arrived at the UW on Monday that will be distributed among UW Medicine’s four hospital campuses...Photographed on December 14, 2020.
Mike Siegel
Posted Wednesday, January 20, 2021 4:17 pm
By Grace McCarthy

The SuperTrack Point Roberts health clinic continues to pursue efforts to have the clinic designated as a local vaccination site for the community. The clinic is in the final stages of being certified by the state department of health and anticipates that happening by the end of January.

Still unknown is when the clinic could expect to get vaccines to actually stick into people’s arms. The supply and distribution of the two approved vaccines is uncertain throughout the county, state and country. Due to storage considerations, the local clinic will be limited to only using the Moderna vaccine which requires less stringent refrigeration.

In the meantime, the clinic is recommending that people use the state’s www.FindYourPhaseWA.org website to find out whether they are eligible for a vaccination.

Whatcom County Health Department said it would continue prioritizing vaccinating people in Phase 1a, as the Washington State Department of Health (DOH) announced Monday it would expand eligibility to more of the public.

In a January 18 press conference announcing the start of the vaccination phase, governor Jay Inslee said people 65 and older make up 80 percent of statewide Covid-19 deaths.

Previously, Washington had restricted those in Phase 1b Tier 1 to be 70 years or older but changed that to align with CDC guidelines. The change adds nearly 400,000 more Washington residents eligible for the vaccine, according to the governor’s office.

The county health department cited vaccine demand exceeding supply in a press release as the reason it would continue its focus on Phase 1a vaccinations.

“There are still Phase 1a employees who want and need vaccination,” said Melissa Morin, Whatcom County Health Department public information officer. “Vaccine providers haven’t been able to vaccinate everyone in Phase 1a yet because they haven’t had enough vaccine to do so. If more shipments come in and more vaccine doses are available, there’s no reason not to vaccinate Phase 1a and Phase 1b Tier 1 concurrently, but that’s not the case right now.”

Despite the county continuing to prioritize the Phase 1a group, Morin said enrolled providers in Whatcom County can begin administering the vaccine to people 65 and older.

“Everyone will have the chance to get vaccinated,” said Cindy Hollinsworth, Whatcom County Health Department communicable disease manager, in a press release. “We know vaccination needs to move faster in our country, our state and our county. We’re doing what we can to speed this along.”

Whatcom County undersheriff Doug Chadwick said law enforcement and corrections deputies began receiving the vaccine last week from several healthcare providers. This comes as Washington State Patrol announced January 15 it had started voluntary vaccinations for its employees, although a state patrol spokesperson could not provide information if officers in Whatcom County had been vaccinated. A Blaine Police Department spokesperson said police had yet to hear when the vaccine would be offered to officers.

How to get vaccinated

With these new guidelines, people eligible to be vaccinated can get a shot from any enrolled Covid-19 vaccine provider, regardless of county, the health department spokesperson said. The protocols for verifying eligibility to receive a Covid-19 vaccine are at the discretion of vaccine providers. Providers can choose how they prioritize vaccinating patients, with one of the most important factors being supply, Morin said.

There is no county-wide list Whatcom County residents need to be on to schedule a vaccination, the health department spokesperson added.

On January 18, DOH launched a Phase Finder tool to help residents know when they will be eligible for a vaccination. People can determine their eligibility by visiting findyourphasewa.org. If eligible, people will get a confirmation they can take to the vaccination sites, which are viewable on the website. Those who are not yet able to receive the vaccine can still fill out the questionnaire to receive a text or email alerting them when they’re eligible.

As of January 18, as many as 17 healthcare providers in Whatcom County had been approved and registered by DOH but the county had double that number, 34, with pending applications. The number of providers administering the vaccine varies depending on weekly allotment from DOH, Morin said.

The health department could not say how long the state would take to approve applications for county providers, but Morin said the time seemed to vary for different providers.

“We are aware of some providers waiting more than a month, and we know that DOH is increasing their staffing for application processing,” she said.

Family Care Network (FCN) has not received vaccines to administer to those in Phase 1b yet, according to an update on its website. The provider is prepared to administer the Moderna vaccine when it arrives, but does not know how many vaccines its clinics will receive, according to the FCN website.

Morin said the department was unable to provide accurate numbers of vaccine doses administered in the county because of inconsistencies on how providers are reporting numbers. The county is also seeing inconsistent data on the Washington State Immunization Information System, with which Morin said she’s heard other counties are also having difficulty.

Inslee announced January 18 that enrolled providers needed to administer 95 percent of their vaccine allotment within a week, effective immediately. Providers are now also required to submit vaccine data to DOH within 24 hours of administering the vaccine.

How many vaccines are being distributed

County health department officials said the county has received an inconsistent number of doses that has ranged from 300 to 5,000 weekly.

All enrolled providers have received the vaccine, but some have received very little and not all receive a weekly shipment, Morin said.

In addition to dose uncertainty, a vaccine provider with the federal Pharmacy Partnership for Long-Term Care Program failed to show up to scheduled vaccination clinics for several long-term care facilities in the county. A local provider stepped in and vaccinated these residents and staff out of the county’s vaccine supply, instead of the state vaccine supply that pharmacies use. The health department was unable to provide additional information on the affected long-term care facilities and provider that offered additional vaccines by press time.

Both of these have slowed vaccine distribution, the health department said.

As of January 16, nearly 294,386 vaccine doses had been administered in Washington – about 42.3 percent of the 696,075 vaccines delivered to the state, according to DOH data. The U.S. Census Bureau estimated over 7.6 million people lived in Washington in 2019.

DOH reported about 14,300 vaccines were being administered daily in the state last week but it has a goal of vaccinating 45,000 people daily once it receives enough vaccines to do so over the next few months, Inslee said in the press conference. The state will continue building its vaccine distribution capabilities as it waits on more vaccines, he said.

Morin could not say who the largest vaccine provider in the county is or the average number of vaccine doses given daily because the health department does not share provider-specific data with the public due to the state’s concern on vaccine security.

The health department spokesperson said Whatcom County has various weekly meetings with its counterparts in Skagit, Island and San Juan counties, with which the county is grouped in the governor’s new “Healthy Washington – Roadmap to Recovery” plan. The region, currently in Phase 1, will move to Phase 2 when it has a decreasing trend of two-week cases and hospital admissions, and ICU occupancy is less than 90 percent and a virus positivity rate of less than 10 percent.

Mass vaccinations for people in Phase 1b Tier 1 will begin at the Skagit County fairgrounds at 501 Taylor Street in Mount Vernon, on Tuesday, January 26. By appointment, Skagit County Public Health will administer the vaccine 10 a.m. to 4 p.m. on Tuesdays through Saturdays.

Whatcom County Health Department is in the early stages of creating large-scale vaccination clinics with the collaboration of local healthcare providers, Morin said. The department doesn’t know how many sites will be available because it is still working to understand the amount of resources needed, she said.

Morin said there are no plans currently for neighboring counties to help Whatcom County finish Phase 1a vaccinations.

Inslee said in the press conference that 50 percent of people in Phase 1b Tier 1 will need to be vaccinated before those in tiers 2-4 receive their shot.

People in Phase 1b tiers 2-4 can be vaccinated together in group clinics if vaccinating people only in tier 2 could mean doses go to waste, according to the news release. DOH hopes to vaccinate everyone in Phase 1b before late spring.