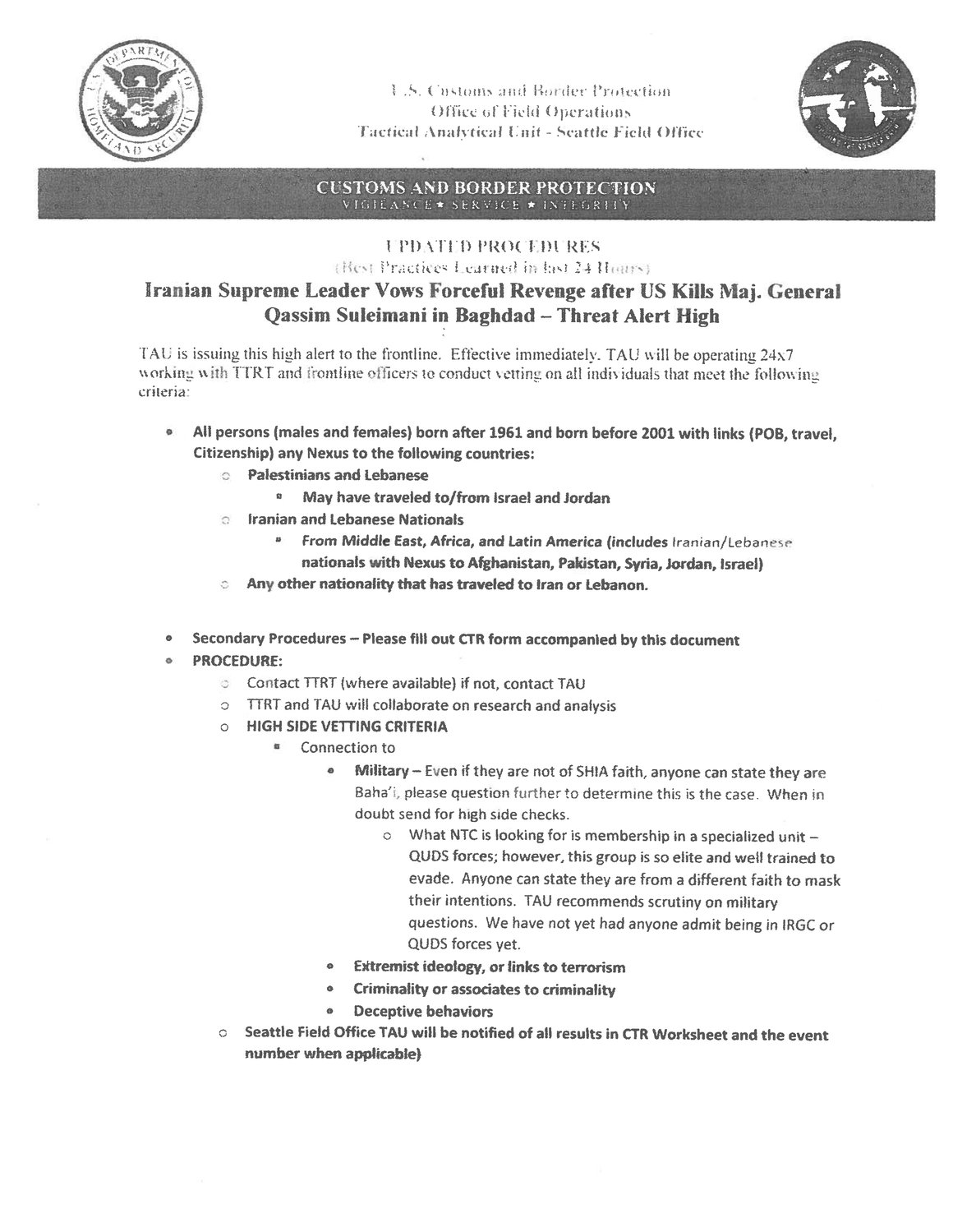 The CBP bulletin that instructed U.S. border agents to detain travelers who were born in Iran or met certain other criteria. The full document can be read online at thenorthernlight.com.

Following a U.S. airstrike on an Iranian military figure, a national CBP spokesperson stated that there had been no directive to detain Iranian-Americans entering the U.S. based on their country of origin.
Previous Next
Posted Wednesday, January 29, 2020 4:49 pm
Patrick Grubb

In a bulletin issued by the tactical analytical unit (TAU) in U.S. Customs and Border Protection’s Seattle Field Office, officers were instructed to conduct vetting on all individuals who met certain criteria, including being Iranian nationals or having traveled to Iran. The bulletin, labeled “Iranian Supreme Leader Vows Forceful Revenge After U.S. Kills Maj. General Qassim Suleimani in Baghdad – Threat Alert High,” presented updated procedures described as being “best practices learned in the last 24 hours.” Suleimani was killed in the early hours of Friday, January 3 by a U.S. drone strike near the airport in Baghdad, Iraq.

The undated bulletin was given to The Northern Light by local immigration attorney Len Saunders, who said he received it from an anonymous source. The document has been reviewed by an individual familiar with CBP communications who described it as being consistent with previous agency directives. The individual said that such directives would normally be emailed or read aloud at briefings that occur at the beginning of shift changes. The fact that it was given to someone outside CBP was “shocking,” said the individual.

Presumably, the directive was published following a teleconference on or about January 3 between field office directors and CBP Acting Commissioner Mark Morgan and Deputy Commissioner Robert Perez “where the field was asked to remain vigilant and increase their situational awareness given the evolving threat environment,” according to CBP.

The following day, Blaine-area ports of entry conducted “extreme vetting” of more than 60 travelers with Iranian backgrounds including U.S. citizens and permanent residents, in some cases detaining them for up to 12 hours. Following attention by local, national and international media, the operation was suspended. At the time, a national CBP spokesperson stated that there had been no directive to detain Iranian-Americans based on their country of origin. A local CBP press officer said that he had nothing to add to the comments made by the national office.

The directive obtained by The Northern Light states: “Effective immediately, TAU will be operating 24x7 working with TTRT (tactical terrorism response team) and frontline officers to conduct vetting on all individuals that meet the following criteria:

All persons (males and females) born after 1961 and born before 2001 with links (place of birth, travel, citizenship) or any nexus to the following countries …”

The directive then lists Iranian and Lebanese nationals and Palestinians as well as persons of any other nationality who had traveled to Iran or Lebanon.

The bulletin instructs officers to conduct secondary inspections and use the “CTR” form (a counterterrorism checklist) before contacting the TTRT or TAU. Under a section labeled “High Side Vetting Criteria,” officers were instructed to look for connections to the military, extremist ideology, criminality or deceptive behaviors.

The bulletin is consistent with published interviews of some detained travelers who reported being asked about whether they or other relatives had ever served in the Iranian armed forces.

In an article published January 22, The Northern Light broke the story of a local CBP whistleblower who said Iranian-born travelers were detained at other border crossings in the Blaine sector as well. Travelers were selected for counterterrorism inspections based solely upon their national origin, the CBP officer said, adding that there were no immigration or customs reasons to detain them. Once the detentions became national news, Blaine port director Kenneth Williams put out a directive on January 5 at 1 p.m. saying the operation was suspended, the CBP officer said.

A copy of the bulletin obtained by The Northern Light is available online at thenorthernlight.com.