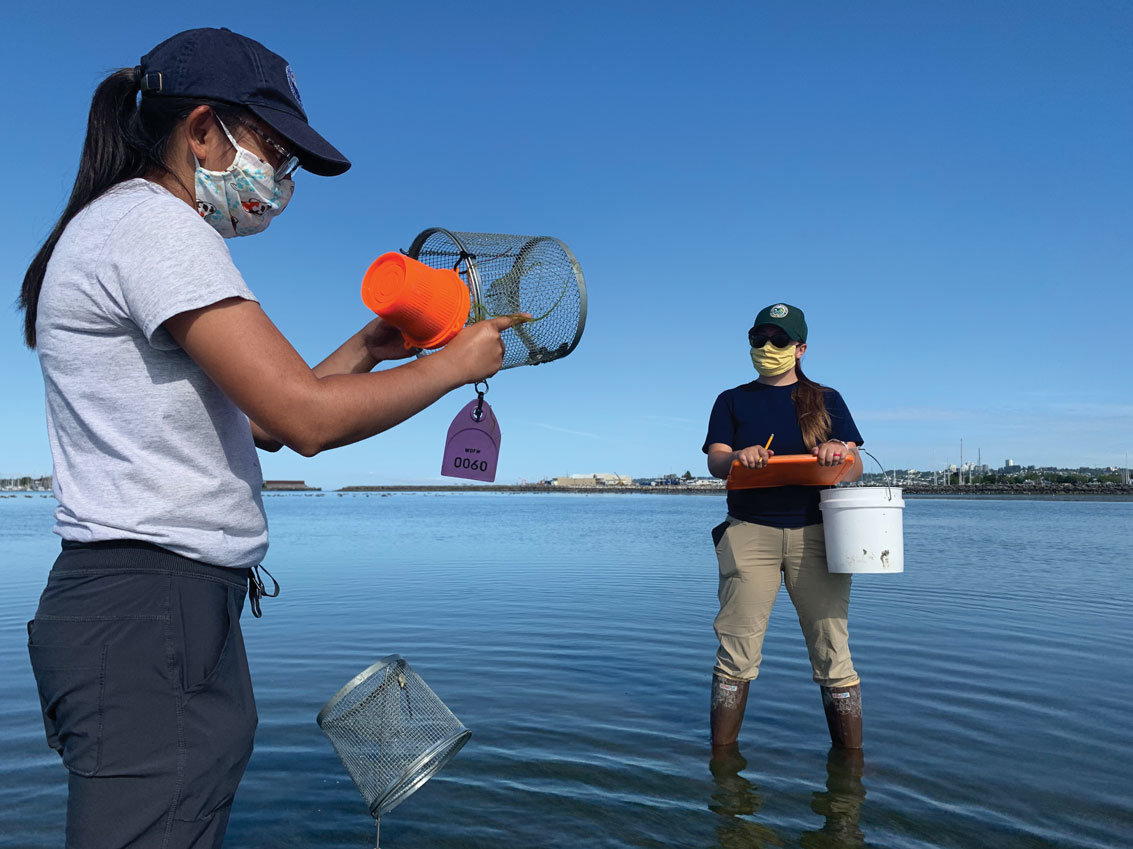 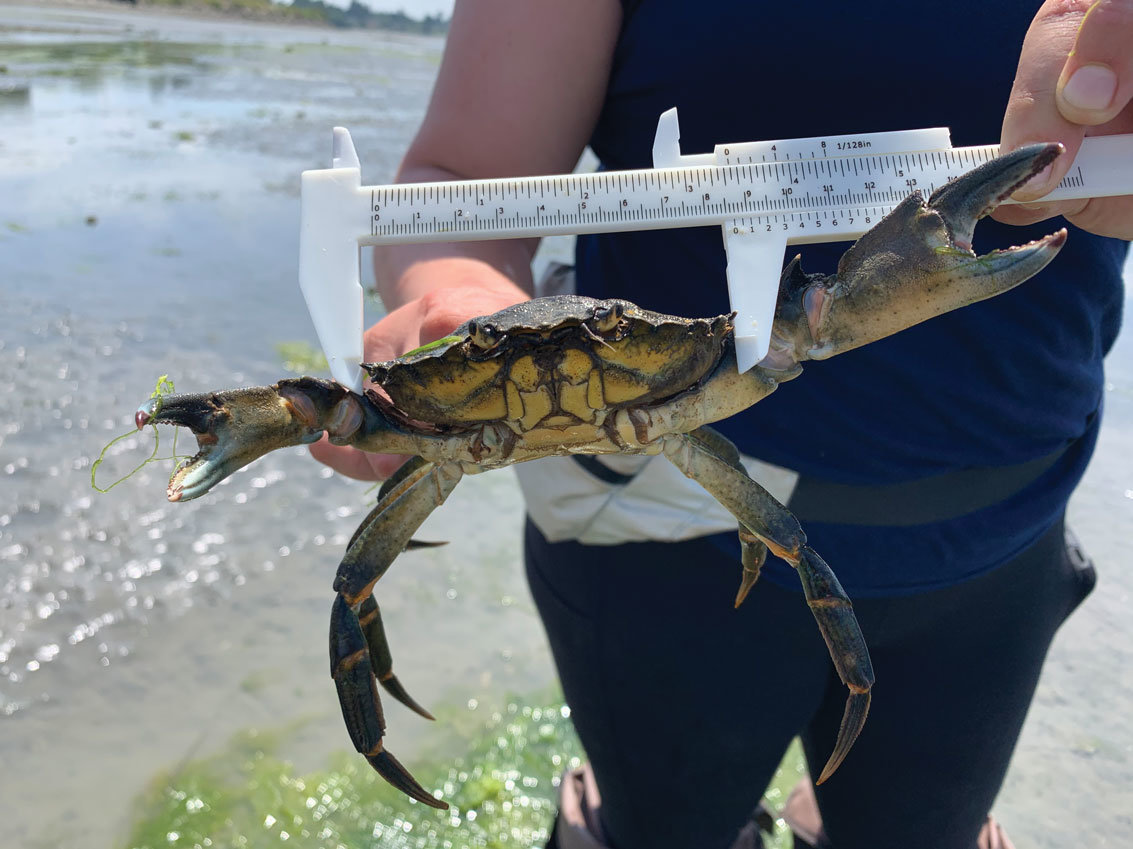 “We knew there were quite a few but once we reached over 200 we realized this was a lot more than we were expecting,” said Allie Simpson, ecosystem project coordinator for Northwest Straits Commission.

Drayton Harbor was labeled a hotspot for the invasive crab in fall 2019 after trapping worried scientists about the crab’s effect on the ecosystem with the Dungeness crab, oyster and clam populations.

“We’re building a picture of where green crabs are coming from in places like Drayton Harbor, Skagit and Whatcom county,” said Emily Grason, a marine ecologist with Washington Sea Grant marine research program at the University of Washington “It’s a complex picture that they might be coming from multiple places so we’re still tracking that information to learn how we can use it to manage green crabs to reduce spread and infestation.”

This year’s trap rate was roughly eight crabs removed for every 100 traps, said Chelsey Buffington, European green crab lead for Washington Department of Fish and Wildlife (WDFW). This data will eventually compare trapping locations in Washington, Buffington said. WDFW partnered with the Northwest Straits Commission and Washington Sea Grant, a marine research program at the University of Washington, to trap in Drayton Harbor this year.

The week of September 14-18 had the season’s highest trapping numbers with 58 green crabs removed from 171 traps, Buffington said. The scientists trapped 34 European green crabs in 302 traps during their last week of trapping that ended October 16.

“That number is higher than most other sites in the Salish Sea where we have been trapping,” said Grason, speaking to the overall numbers this year. “For reference, Dungeness Spit, which in the past we would have considered our hot spot within the Salish Sea, captured only three European green crabs this year.”

However, Grason said it’s good news that the average capture rate was roughly in line with last year.

“Obviously we want that capture rate to go down but the fact that it didn’t explode in the first year or two is actually very promising news,” Grason said. “To me this is a hopeful sign that we have the potential to be effective in Drayton Harbor.”

Other areas of concern in Whatcom and Skagit counties include Lummi Bay, where green crab numbers surpass Drayton Harbor and Samish Bay in Skagit County, where about 100 crabs were found, Grason said.

In early September, the scientists started seeing an increase in younger crabs that had recently hatched and were the size to catch in traps.

“We were expecting it but we didn’t want to see it,” said Simpson, who noted an even split in young crabs versus older crabs. The scientists predicted seeing younger crabs this year after they emerged in fall 2019.

The scientists trapped at four core sites near the Blaine marina, the old Cherry Street pier, the small creek between Dakota and California creeks and the mouth of California Creek. In addition to the core sights checked every other week, scientists set prospecting traps throughout Drayton Harbor.

“You can trap in one location but you want to go out there and see what’s going on in other locations,” Buffington said.

Scientists caught one crab in the mouth of Terrell Creek after they dedicated a week to setting 50 traps in Birch Bay. Semiahmoo yielded no captures during prospective trapping.

“We identified a few hotspots, as well as confirming our best guess that green crabs aren’t necessarily found everywhere in Drayton Harbor,” Grason said. “We thought that was likely to be the case but you need to be looking in those areas to verify that estimate is accurate.”

In all, 3,222 traps were set this year in Drayton Harbor, Buffington said.

As for the next steps, the organizations will analyze the data to help inform next year’s trapping that will likely include focused trapping in Dakota Creek, where a higher population of crabs were found.

Buffington said the group didn’t have the funds to do a bay-wide assessment this year but plans to trap in deeper waters next year. The project is funded through June 2021 but the organizations are working to secure funding past that date.

“In order to effectively manage the effort it’s going to take a little bit more money than what the state has so far been able to allocate,” Grason said. “We’re hopeful, but we know this is a tough budgeting year for everybody in the state so it’s still very uncertain.”

The trapping season ends in the fall because low tides occur at night, which makes trapping in muddy terrain more difficult and creates a safety concern for the scientists who walk into the water, Simpson said. The crabs also burrow themselves during the winter, making it hard to catch them in the traps.

“I suspect we’ll be catching some next year,” said Buffington, quickly adding, “But hopefully we won’t catch that many.”

European green crabs can be confused with native species, according to the Washington Sea Grant website. The adults are smaller than a Dungeness crab, with 3-inch wide shells, and can vary in color. Five spines outside of the eye help differentiate the crab.

If you believe you’ve seen a European green crab or shell, photograph different angles of the crab with a reference to show the crab’s size. It is illegal to possess a green crab in Washington because they are a prohibited level 1 species so leave it where it’s found. Email photos and location information, or geographic coordinates, to crabteam@uw.edu.

Landowners willing to allow scientists trap on their property next year can contact Allie Simpson at simpson@nwstraits.org

(And for those curious, Washingtonians are unable to eat the crab due to the illegality of having them in your possession. Buffington said they have been eaten on the East Coast but their small size doesn’t provide much meat.)