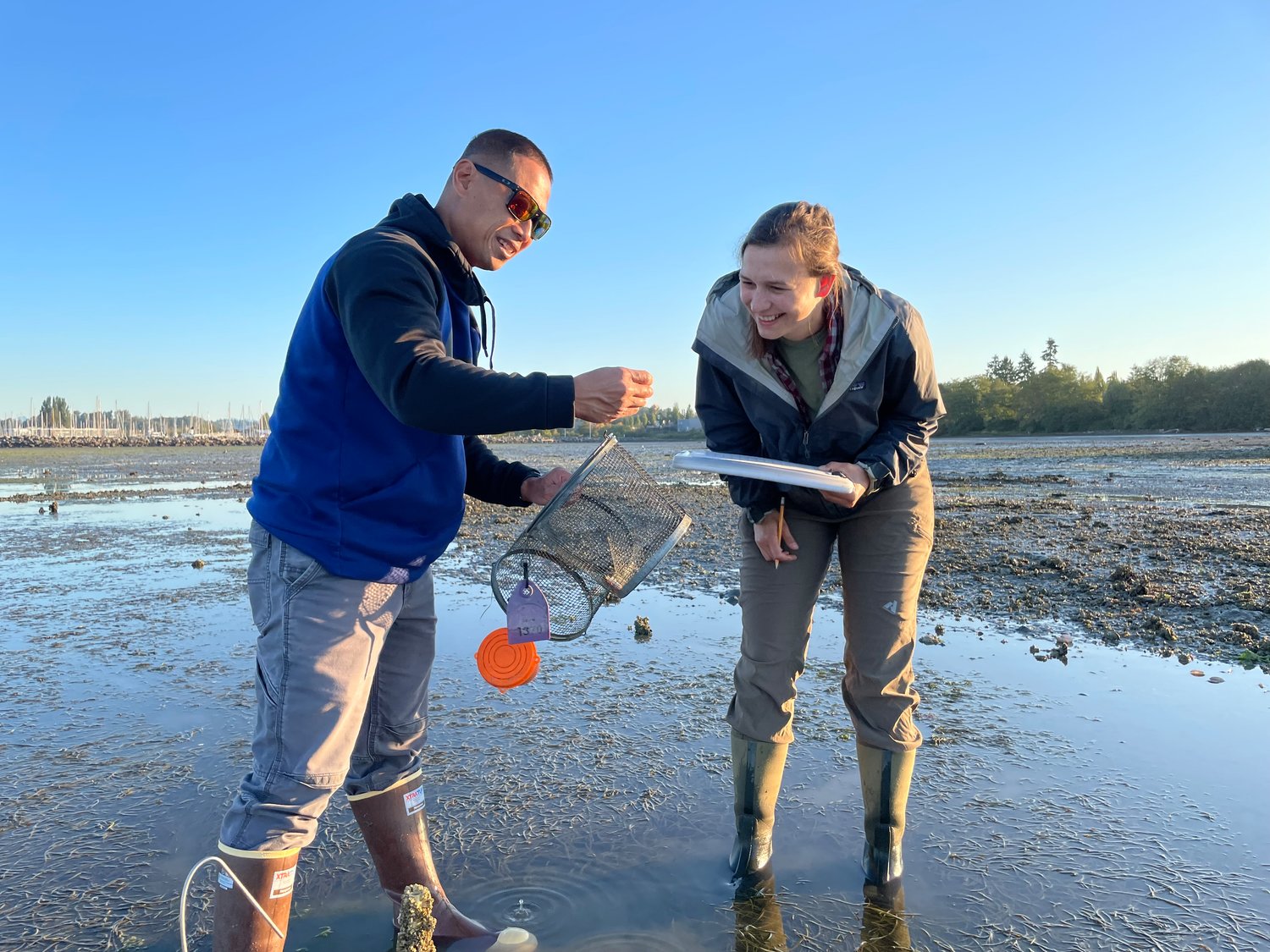 Scientists are hailing this year a success for European green crab removal in Drayton Harbor, but say they need to keep up the work to manage the invasive species’ numbers.

A team of scientists from Washington State Department of Fish and Wildlife; Northwest Straits Commission and University of Washington’s Washington Sea Grant started closely monitoring local waters after discovering European green crabs in Drayton Harbor in 2019. The invasive species is known for its damaging effects on native habitat and species such as shellfish, native crabs and eelgrass. The crabs were found late in the 2019 trapping season, which runs late spring until mid-October, causing scientists to quickly consider Drayton Harbor one of the most concerning locations along Washington’s inland shorelines.

This year, scientists added a trapping site at the mouth of Dakota Creek after catching an inordinate number of crabs there near the end of 2020. The scientists caught 43 crabs there this year, the most of any other trapping site, said Allie Simpson, ecosystem project coordinator at Northwest Straits Commission. The other traps monitored daily were at the old Cherry Street pier, where 21 crabs were found, and the mouth of California Creek, where five were found, she said.

“A lot of results from 2021 are really promising in terms of the efficacy of trapping efforts the past two years,” said Emily Grason, program manager of Washington Sea Grant’s crab team, adding Drayton Harbor remains a hot spot for the crabs.

Scientists also conducted a grid survey of Drayton Harbor in late August where they set 1,000 traps in one week, as well as two assessments of Birch Bay to find whether they were missing areas they needed to trap, Simpson said. Crabs were found where scientists expected.

Grason said three to four crabs were caught for every 100 traps set, with 5,400 traps set this year. “It underscores how many traps you have to set, even if they’re in hotspots,” she said.

During the Drayton Harbor surveying, the crew started using shrimp traps which yielded so much success, they later switched to using them at their main sites – 54 out of the 71 crabs found at core sites were caught by the shrimp traps this year, Simpson said.

“It was really eye opening for us to realize that this type of trap was working incredibly well for this area,” she said. “It’s a process to go through and see what works best in different areas.”

The sheer number of juvenile crabs, which indicate if the crab population is growing in the area, was another good sign for  scientists. This year, they only found four juveniles in creek mouths. Simpson said scientists would like to gain access to private properties upstream of Dakota Creek to confirm there are no crabs upstream, where juvenile crabs were found in 2020.

Meanwhile, the Lummi Indian Business Council recently declared a disaster after over 70,000 European green crabs were found in a sea pond on the Lummi Reservation, which Grason said is likely attributed to the unique habitat in the sea pond which is favorable for the crabs.

“Our really intense trapping efforts are paying off. Our numbers are much lower than they were last year. We trapped even more this year and we’ve really targeted areas where we see crabs,” Simpson said. “It’s obvious in the numbers and it’s obvious when you’re trapping for a few weeks and don’t find anything. It shows how important it is to get on the ground, mobilize and get a plan in place. Hopefully next year we will see fewer and fewer crabs.”

Correction: This article was updated to correct Emily Grason's quote on European green crab removal efforts in the Lummi sea pond. We regret the error.