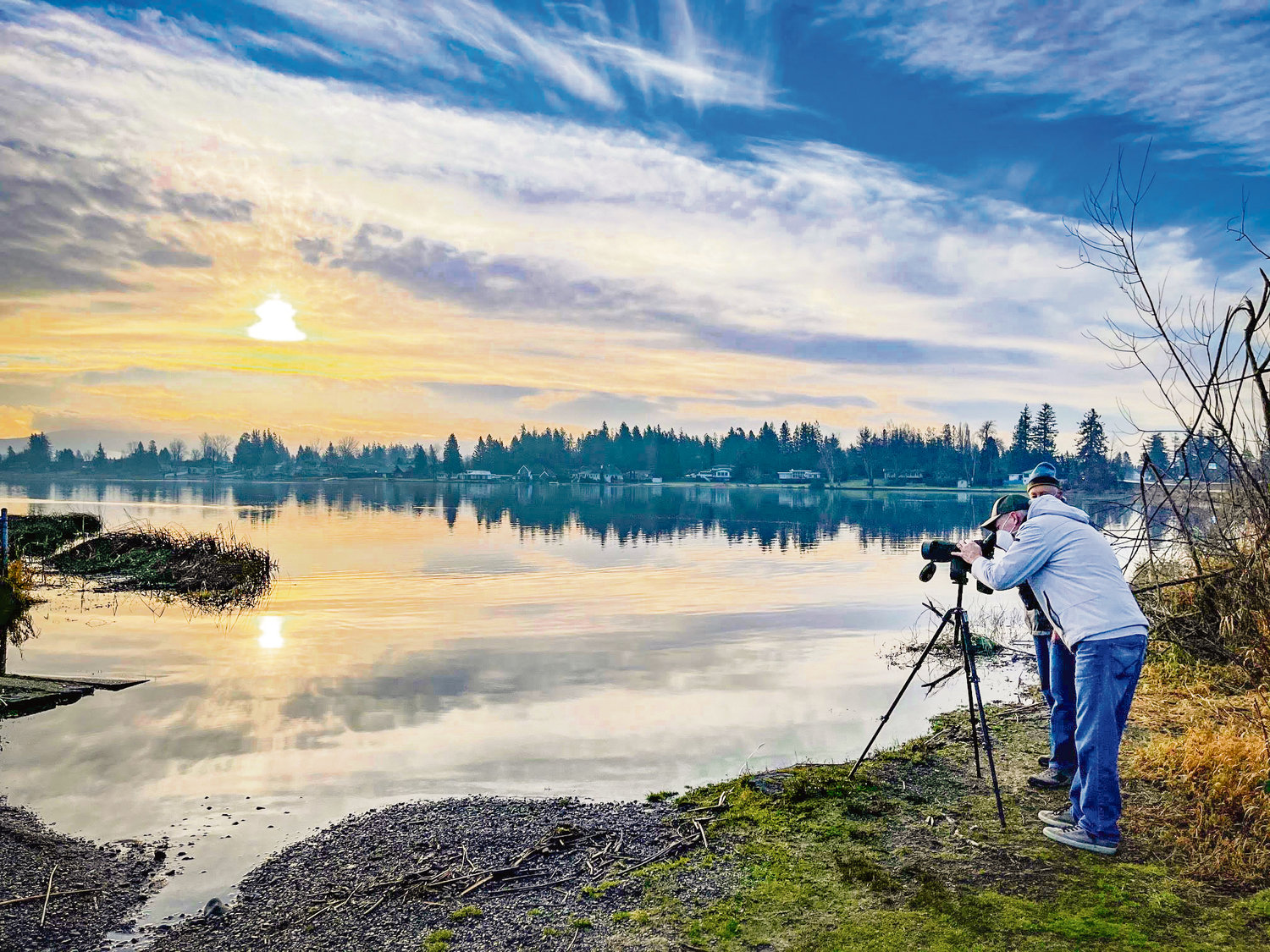 U.S. Representative Rick Larsen (D-WA) takes a look through binoculars at Wiser Lake during a migratory bird viewing trip with the North Cascades Audubon Society. Larsen, who said he enjoys birding in his spare time, is co-sponsor of a bill that will strengthen the Migratory Bird Species Act, which protects more than 350 migratory bird species that use the Pacific Northwest as their flyway.
Courtesy photo
Posted Wednesday, February 3, 2021 5:26 pm
By Tara Nelson

More than 350 species of migratory birds that fly through Blaine, Birch Bay and northern Whatcom County will be better protected from industrial threats if a bill being co-sponsored by U.S. Representative Rick Larsen passes in Congress.

Larsen visited Wiser Lake January 15 along with North Cascades Audubon Society president Steven Harper, and Robert Kaye, who is a member of the chapter’s conservation board. The visit was part of a round of talks with Whatcom, Skagit and Snohomish county Audubon Society chapters to discuss a Trump administration rule change that weakened the act and the importance of protecting birds to the environment and the local economy in Whatcom County.

The bill, which was originally sponsored by U.S. Representative Alan Lowenthal (D-CA) has not yet been formally introduced in Congress but reverses the Trump administration rollback and strengthens protections for birds. Larsen is one of the bill’s original co-sponsors.

Joseph Tutino, communications director for Rick Larsen, said the Migratory Bird Treaty Act has been around since the early 1900s, and creates a uniform system of protection for more than 1,000 migratory bird species that migrate between the U.S. and Canada – about 350 of which use the Pacific Northwest as their flyway, cutting directly across Whatcom County.

The act is important to protect and conserve migratory birds that fly long distances and cross many international borders with varying environmental policies and conservation measures. It is also important to local economies that rely on birding tourism such as Blaine, Birch Bay and Lynden.

The U.S. also has similar international conventions with Mexico, Japan and Russia.

“It’s part of the economy here,” Tutino said. “It’s a great outdoor activity and people come to the Northwest to go birding. If we start losing more protected areas, that is going to trickle down to everything else.”

In December 2017, however, the Trump administration announced a rule change that would no longer protect birds from incidental killing as a result of industrial practices. That means that under Trump’s re-interpretation of the rule, the federal government cannot pursue penalties on companies that, through negligence or bad practices, kill a significant number of birds.

On August 11, 2020, a federal court struck down the Trump administration’s interpretation, ruling that is “contrary to the plain meaning of the Migratory Bird Treaty Act” and “runs counter to the purpose of the act to protect migratory bird populations.”

However, on November 23, the U.S. Fish and Wildlife Service (USFWS) published an environmental impact statement on the proposed rule and found that although changes to the act would increase the legal certainty for companies, companies would be less inclined to implement best practices to reduce incidental bird takes, resulting in “increased bird mortality.”

“Really, it kind of takes responsibility away from companies so they can kind of skirt around some of these protections that have been in place for decades,” Tutino said.

Tutino said Larsen sent a letter to Deb Haaland, the incoming secretary of the interior, in December to let her know that Larsen opposes the Trump administration’s rule. Tutino said he thinks Haaland, who is one of the first Native American women to serve in a presidential cabinet, will be more friendly to measures that will strengthen the act instead of weaken it.

“We fully expect with a Democratic majority in the Senate and with a Democrat as secretary of the interior, that we will be able to pass this and make sure the MBTA will be strong for years so we can minimize bird deaths,” Tutino said.