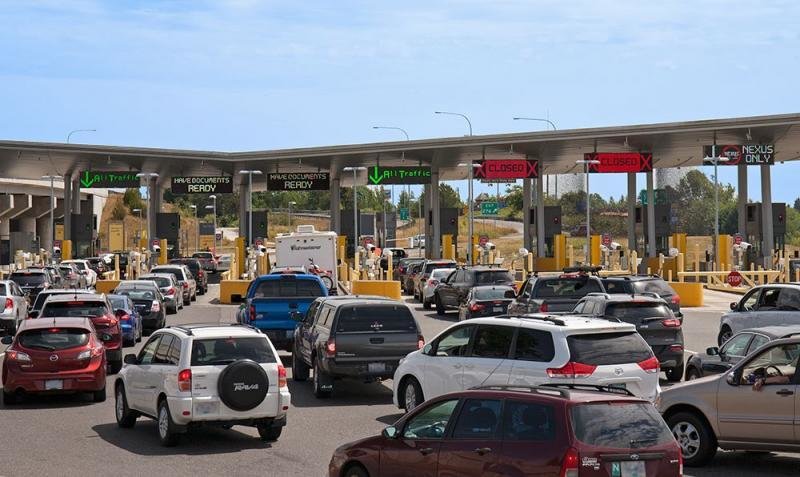 More than 60 travelers with Iranian backgrounds were held for hours at the Peace Arch border crossing on January 4 and 5 and received extra questioning, following a U.S. airstrike that killed an Iranian military figure on January 3 in Baghdad, Iraq. Systematic enhanced screenings appear to have been limited to the Peace Arch border crossing, suggesting that the decision was made locally by CBP’s Seattle Field Office, which is based in Blaine, rather than at the national level.

On January 5, a press release issued by the Washington state chapter of the Council on American-Islamic Relations (CAIR), a civil rights and advocacy group, stated that more than 60 Iranians and Iranian-Americans of all ages were detained at length and questioned at the Peace Arch border crossing on January 4. The press release said that many more were turned around at the border and refused entry into the U.S. due to CBP’s lack of capacity to handle them.

“Those detained reported that their passports were confiscated as they were questioned about their political views, allegiances, what courses were studied in college and other invasive and interrogative questions,” said the press release, which quoted Masih Fouladi, executive director of CAIR Washington. Fouladi did not return a phone call from The Northern Light by press time.

While CAIR’s press release suggested that the Department of Homeland Security (DHS), of which CBP is a component agency, had issued a “national order” for CBP to detain travelers with Iranian heritage deemed potentially suspicious or adversarial, this was quickly denied by a CBP spokesperson.

“Social media posts that CBP is detaining Iranian-Americans and refusing their entry into the U.S. because of their country of origin are false,” said CBP spokesperson Michael Friel. “Reports that DHS/CBP has issued a related directive are also false.”

An immigration lawyer who personally witnessed the extra screenings said that the screenings appear to have been limited to the Blaine border crossing. “All of my colleagues have said that nobody has had problems at any other ports of entry other than Blaine,” said Blaine immigration attorney Len Saunders. “That is bizarre. Why was Blaine doing this? Immigration law is supposed to be consistent throughout the country. Why was the Blaine port of entry specifically profiling Persians born in Iran?”

Saunders attended the Peace Arch border crossing at around 4 p.m. on January 4 on an unrelated client matter, and saw dozens of men, women and children who appeared to have Persian backgrounds sitting on the long bench inside the secondary inspection lobby.

“That bench, it’s literally shoulder-to-shoulder with Persian-looking people: older people, younger people and kids,” said Saunders. “Normally it’s mostly people with Indian and Chinese backgrounds who live in the Lower Mainland and need visas. This time, it’s all Persians. I asked one of the officers what’s going on. ‘Extreme vetting,’ he replied. ‘All of those Iranians, they are all being vetted and the only person making the final decision to let them in is the port director. Every single person is going to the port director. It’s taking us hours to process.’”

Saunders said that he saw CBP officers distributing juice boxes and crackers to the travelers on the bench. He also said that he observed several boxes of pizza, which had also apparently been distributed to the waiting travelers. “I’ve never seen them handing out food to people sitting in the lobby,” he said. “For them to be handing out food and drinks, obviously those people had been in there for hours.”

Matt Adams, the legal director for the Northwest Immigrant Rights Project, said that a staff member of the non-profit legal services group also went to the Peace Arch border crossing over the weekend and witnessed the detention of travelers with Iranian backgrounds. Adams also suggested that the enhanced screenings were limited to the Peace Arch crossing.

“We heard from advocates in different parts of the country reaching out to us, but no one else had experienced anything similar where they were,” he said. “That’s not to say that some individuals hadn’t been stopped. But it didn’t seem to be any systemic approach where people were being held for hours, like they were in Blaine.”

Adams said that his organization was keeping “its ears to the ground,” and that there appeared to be no further reports of the detentions beyond January 5. However, Adams said that his organization could potentially seek a legal remedy if the reports continue. “If it becomes clear that there is a directive to continue to subject all U.S. citizens and lawful permanent residents of Iranian heritage to this further interrogation, we are going to seek some declaratory judgment,” he said.

Last September, The Northern Light reported that the Seattle Field Office area of operations had a large increase in the number of expedited removals being imposed on Canadians crossing the border. Expedited removals typically mean that individuals are banned from entering the U.S. for a period of time, usually five years. The CBC reported last December that expedited removals on the northern border had increased to 616 from October 2018 to September 2019, compared to 312 in the previous 12-month period. According to Saunders, the Seattle Field Office accounted for 309 and 91, respectively, of those numbers, about 50 percent of the total in 2019. There are four field offices on the northern border.

At the time, Saunders attributed the increase to the “new sheriff in town.” He was referring to Seattle Field Office director Adele Fasano, who was appointed to the position in the spring of 2019. She was previously port director for New York and New Jersey and director of field operations in San Diego.

When asked to comment on the reports that extreme vetting of individuals with Iranian backgrounds was limited to the Blaine port, CBP press officer Jason Givens said that he had nothing further to add.

The actions of Blaine CBP officers made international headlines earlier this week, in light of the ongoing military standoff with Iran.