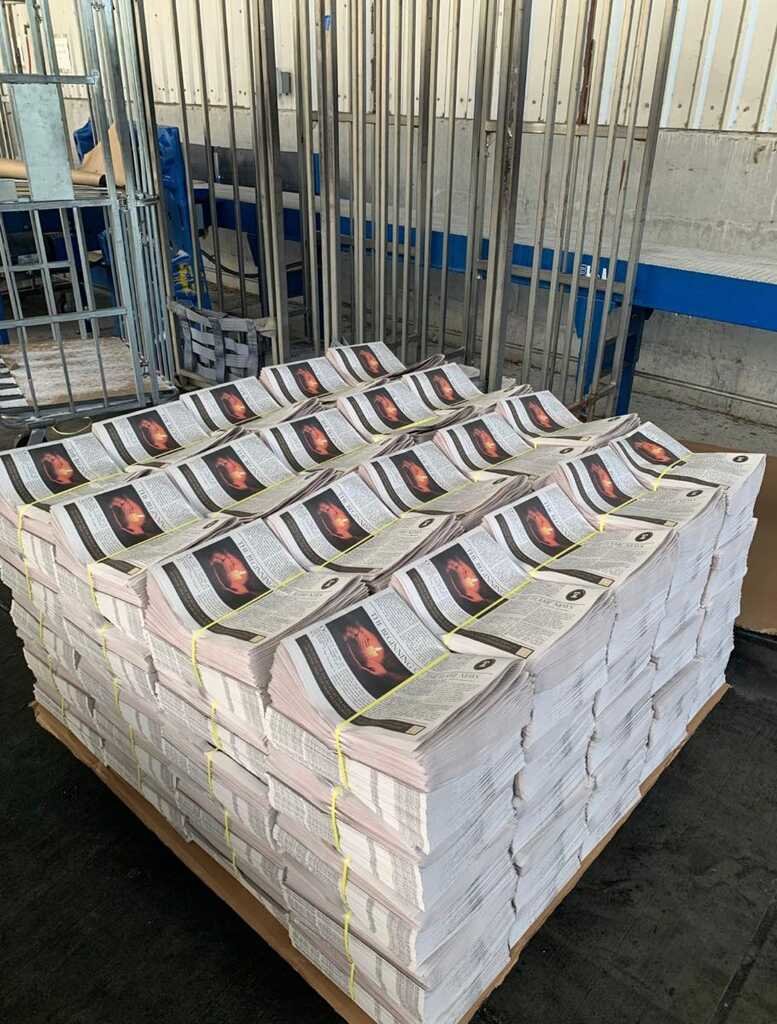 The Flame was distributed to about 1,900 Blaine and Birch Bay residents.
Courtesy photo
Posted Wednesday, January 19, 2022 5:11 pm
By Ian Haupt

Many Blaine and Birch Bay residents received a newspaper called “The Flame” in the mail last week without a mailing label that left them with questions as to why they had received it and if its delivery was legal.

The Flame CEO and co-founder Anna Kane said a Blaine business owner paid nearly $1,900 for copies of The Flame to be mailed to residences in the Blaine and Birch Bay area. This was done legally through U.S. Postal Service’s Every Door Direct Mail (EDDM) service, Blaine postmaster Val Pikalov said.

Through EDDM, anyone can mail anything they want – that is legal – to a specific area or route. “It’s targeted mail,” he said. “We take it on the side and put it in every mailbox.”

Pikalov estimated that mailing The Flame using EDDM could’ve cost anywhere from $1.20 to $2.45 per copy. There’s no set fee, he said. The cost is based on the weight and size of the mailed material and the size of the coverage area.

The Northern Light uses a similar mailing system through the post office that mails copies to all residences in area code 98230.

Kane said this was The Flame’s first issue and that they have plans to distribute a new issue every month. Based in Snohomish County and printed in Mount Vernon, the publication is crowdfunded and hopes to distribute across the country, she said.

Co-founder and editor-in-chief Nicole Orozco said she and Kane are a grandma and a mom of six from Mountlake Terrace who want people to have a variety of uncensored information and views available to make decisions. In print, The Flame says its solution to mainstream media censorship and multi-billion dollar corporations’ narratives is “with an old school idea – a newspaper!” and that it “might be the most important thing you will ever see.”

The Flame is partnered with RiseUp Washington, a 501(c)(4) organization.

Orozco said The Flame is a nonpartisan newspaper and that she believes the U.S. political system is corrupt to its core.

Some article titles in the first issue include, “The role of critical thinking and collaboration in combating tyranny,” “Mandating malfeasance,” “Effective legal action against workplace ‘vaccine’ mandates,” and “Outpatient treatments for Covid-19 reviewed.” Many of the articles lack bylines while anti-mandate organization founders, doctors for alternative Covid-19 treatment, and directors for grass roots constitutional rights organizations write others.

It’s unclear who organized the distribution in the area and how far it reached. Kane and Orozco said around 1,900 copies were delivered to Blaine and Birch Bay residences, which was their first resident-donated distribution. They would not reveal the business owner who paid for the deliveries but said they would notify him that The Northern Light reached out for comment. The Northern Light has not yet heard from the individual.

“The resident wants to make a difference in his community,” Kane said. “He contacted us and wanted everyone in the community to get a copy.”

Kane said the business owner was inspired by Druthers News, an alternative Canadian newspaper, and since he couldn’t get it delivered to the area, he chose The Flame.

Kane believes this will be the only issue sent to Blaine and Birch Bay residents, as she suspects the business owner will not pay for it to be distributed again. Those wishing to receive upcoming issues will have to subscribe, which she said they have already had quite a few people from the area do.

“We’ve had people subscribe and donate,” Kane said. “And a little bit of hate mail.” She said it sounded like the hate mail came from a few neighbors who despised the contents of the paper. Kane said she didn’t understand the hate since residents can easily throw it away.

Ferndale resident Elizabeth Hanson said she was surprised to find The Flame in the mail without a label and questioned the legality of it. But after skimming the articles, she said she found she completely agreed with the views represented and that the information was not new to her.

“The majority of people have not questioned what they hear in the news and from their doctors,” Hanson said. “I think in history we will see that we’ve made the wrong choice. And I think those views should be expressed.”

A retired ESL professor at Shoreline Community College, Hanson said she was not vaccinated and was opposed to state mask and vaccine mandates. She said she researches Covid-19 treatment and protective measures daily and believes alternative approaches should be considered. She also said that she could understand why people would think The Flame was subversive.

“I felt very – no pun intended – inflamed and outraged,” said Birch Bay Village resident Lorraine Day. She said the newspaper was full of conspiracy theories and distortions of truth based on extreme paranoia of government control.

“It was so over the top that I found it just pretty silly,” Day said. “I find it offensive and worrisome that there are people who liked it.”