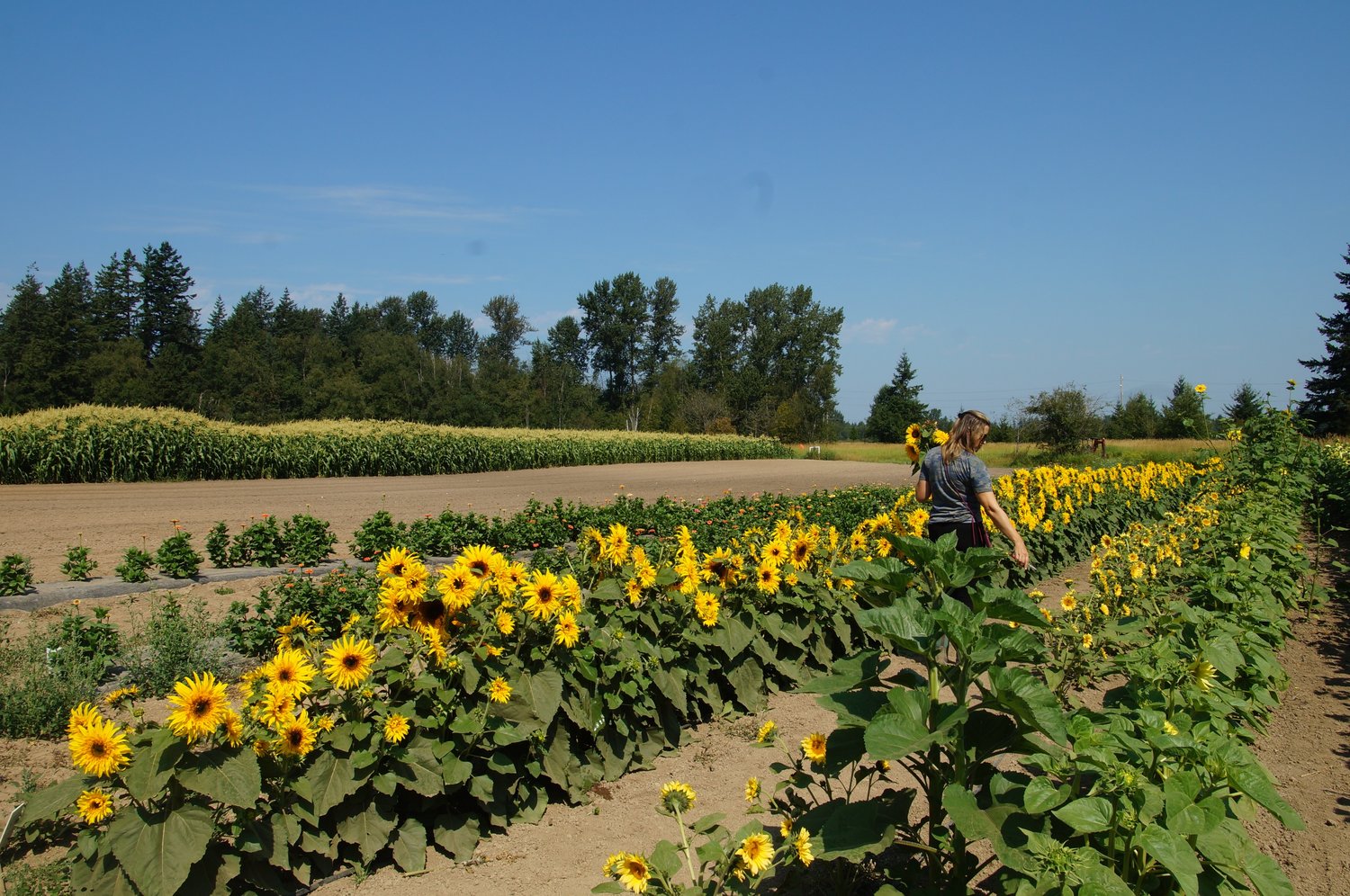 Home Farm U-Pick & Events co-owner Bridgette DiMonda picks sunflowers for a bouquet at her Kickerville Road farm. The family farm offers a year-round farm stand with fresh produce and fruit, as well as weekend summer markets with artisan vendors from across Washington.
Photo by Emily Feek 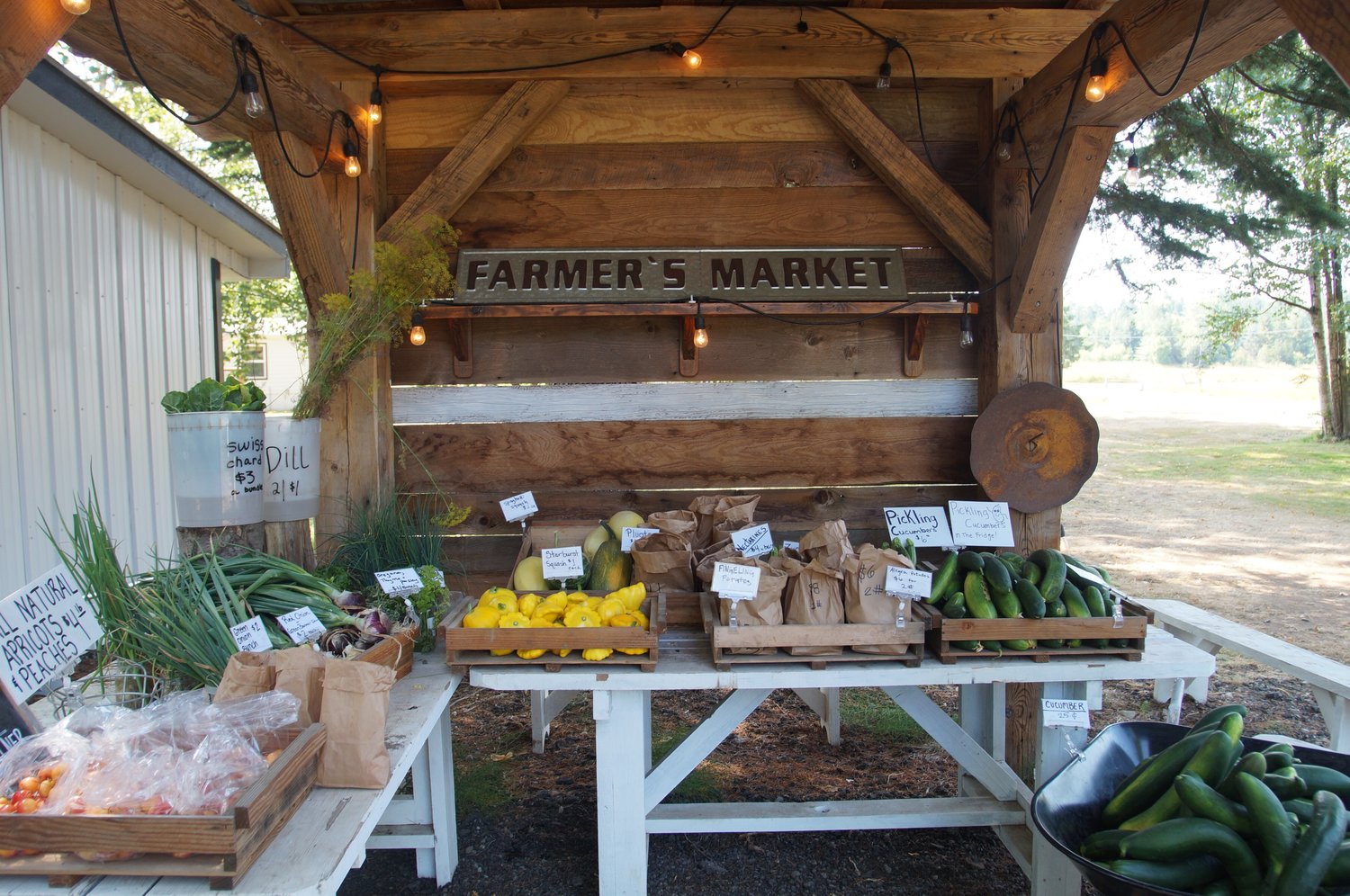 The year-round farm stand at Home Farm’s entrance offers a variety of fresh all-natural produce, including fruit from other farms.
Photo by Emily Feek 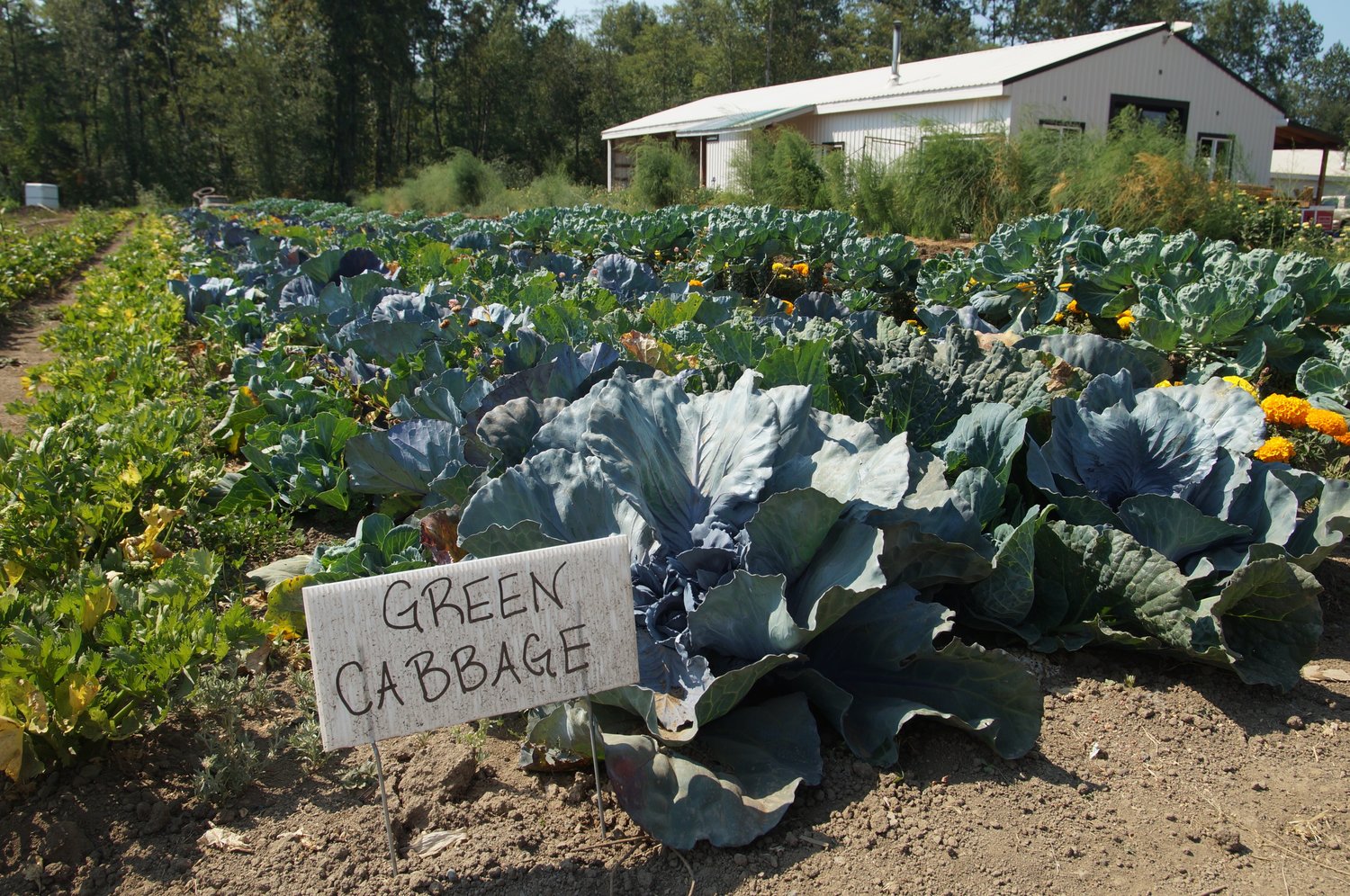 Cabbage is one of many vegetables being grown on Home Farm at 8020 Kickerville Road.
Photo by Emily Feek
Previous Next
Posted Wednesday, August 25, 2021 2:16 pm
By Emily Feek

On a bright Tuesday morning, Bridgette DiMonda is in her element picking a variety of home-grown sunflowers for a bouquet. Honeybees from nearby colonies pollinate the expansive rows of sunflowers and zinnias growing at Home Farm U-Pick & Events along rows of raspberries, blueberries and corn.

Since its founding in 2017, Home Farm has grown from the ground up – literally. Four years later, the farm has expanded with new crops, a farm stand and a developing event center.

Home Farm began as a blank slate when DiMonda and Daniel Burdick moved to Birch Bay. The farm, located at 8020 Kickerville Road, isn’t just a business. It’s also a space for visitors to enjoy and reconnect with nature.

“We don’t make people come out and pick or pay for stuff during our regular business hours if they don’t want to,” DiMonda said. “They’re welcome just to come out and wander the farm and participate in the beauty of it. We love it.”

Aside from the dogs, attractions include a year-round farm stand, U-pick flowers and crops, and a series of summer markets. Home Farm has over 15 varieties of sunflowers and 10 varieties of zinnias for visitors to pick this summer season. The crops include blueberries, raspberries, cucumbers, lettuce and others; a full list of crops and hours can be found on the Home Farm website at
homefarm.farm.

The 2021 market series attracted upward of 700 attendees at each market, DiMonda said. The summer market series began in 2020 but concerns over Covid-19 complicated it.

Home Farm has two markets left in its summer market series that will run 10 a.m. to 4 p.m. August 28 and September 11. The August 28 market will be the largest yet with over 50 vendors, DiMonda said, and she’s still receiving applications.

The markets bring together local artisans from Whatcom County as well as vendors from Snohomish, Oak Harbor, Anacortes and as far as Olympia, DiMonda said. One of the reasons DiMonda enjoys the markets so much is that it allows her to support small businesses; DiMonda used to sell at markets herself and understands the difficulty artisans face.

“I just love being able to have a space for them to come and promote their own business, and I’m able to promote them as well,” she said. “I’d much rather be a cheerleader than in the
spotlight.”

DiMonda’s vision for Home Farm is still being realized. The summer series of weekend markets was a start, but DiMonda’s goals will come to fruition with the event center’s completion.

“Daniel is the farmer of the duo,” DiMonda said. “I’m more the marketer and event person, so my vision was always to have a space where people could come to have parties and congregate.”

The event center will be completed sometime in the fall and will allow the couple to do more with the farm in the off season by hosting indoor events like birthday parties, baby showers or small weddings. After the pumpkin patch is picked, Home Farm stops producing until late spring when the land dries, DiMonda said.

Despite seasonal limitations, Home Farm will have more fall and winter crops like spinach and carrots with the addition of a new greenhouse, Burdick said.

The couple also partners with other small farms like Bellingham-based Joe’s Garden and Okanogan-based Smallwood Farms to supplement their farm stand stock with crops that aren’t ready or that Home Farm doesn’t grow. The farm stand does not have fresh produce during the off season.

In addition to being a communal gathering space, Home Farm also strives to educate community members about their crops, including how to harvest common crops like potatoes and lettuce. In the fall, preschool groups visit the pumpkin patch to learn how pumpkins grow, see the pigs and pick out pumpkins, DiMonda said.

“We don’t just have you come out here and turn you loose,” DiMonda said. “A lot of people have never dug a potato before, so we teach you how to do that, if you want. We teach you how to cut your own lettuce and pick your own beets.”

This year’s pumpkin patch occupies about two acres and boasts a variety of pumpkin types across the field including polar bear, big moose, green gold and blue doll pumpkins. Rather than plant the pumpkin varieties in separate sections, Burdick shuffled all the seeds together in a bag and planted them randomly, he said, joking that DiMonda is the organized one of the duo.

Home Farm’s growth has been steady but not immune to difficulties. During the June heat wave, between 30 and 50 percent of Home Farm’s raspberry crops burned, Burdick said.

Considering all of Home Farm’s growth, DiMonda and Burdick agreed they’re proudest of the community they’ve cultivated, noting that Birch Bay has embraced and supported them since they moved in.

“It’s a big garden here if you think about it,” Burdick said. “That’s all it is. It’s a garden just for the community.”