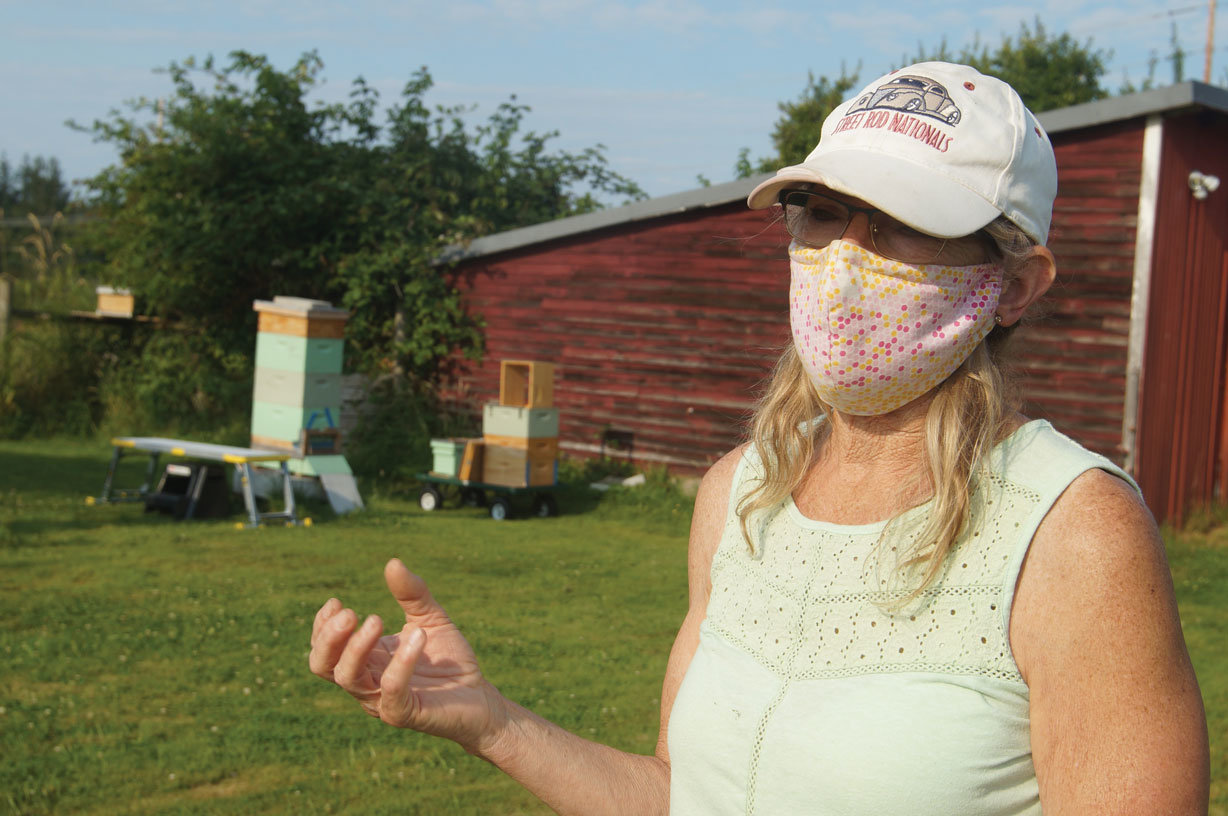 Ruthie Danielsen tends to the six beehives on her Birch Bay property, about a mile from where the Asian giant hornet was caught in a WSDA bottle trap.
Photos by Grace McCarthy 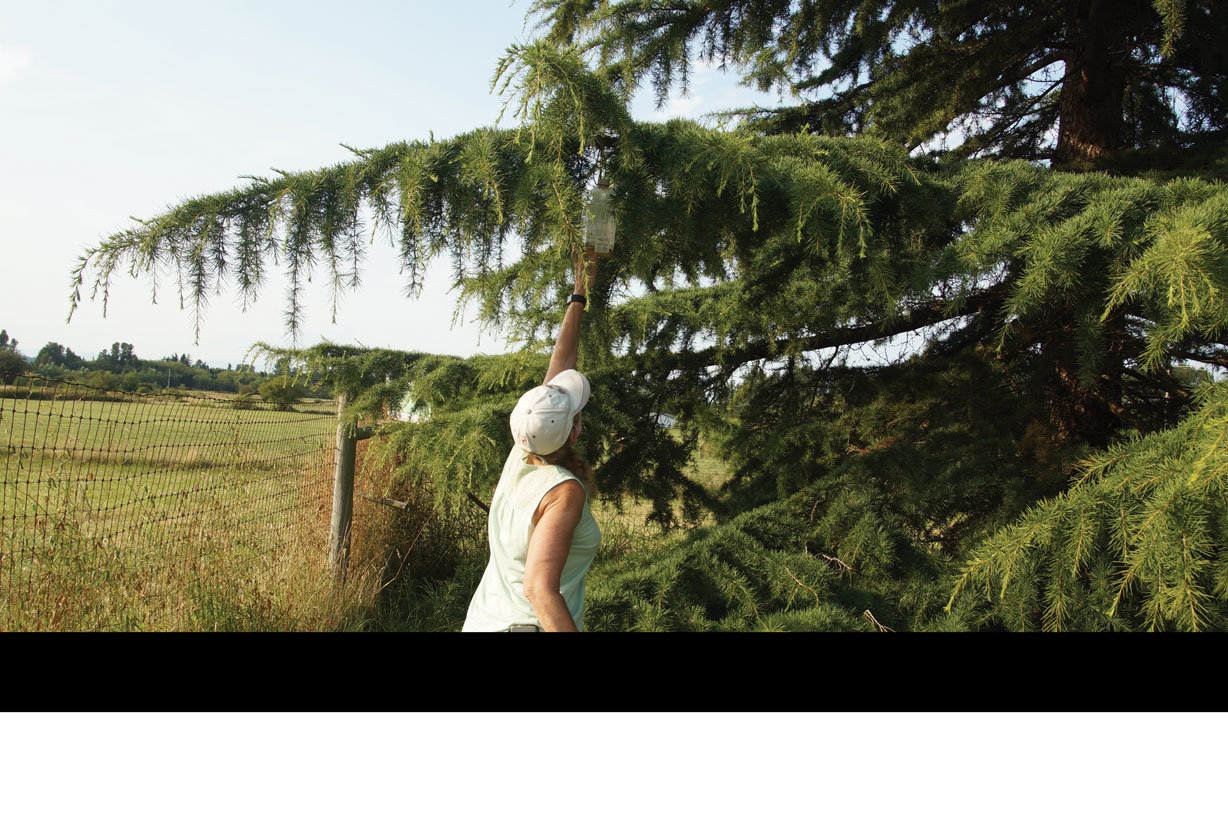 Ruthie Danielsen maintains seven Asian giant hornet traps, three near her home and four on nearby properties. The traps, made of orange juice and rice cooking wine, were proven to work after a hornet was caught in July in a WSDA trap.
Photo by Grace McCarthy
Previous Next
Posted Wednesday, August 5, 2020 4:27 pm
By Grace McCarthy

The hunt for the invasive Asian giant hornet ramps up after Washington State Department of Agriculture (WSDA) officials announced that the first Asian giant hornet in Birch Bay had been trapped just north of BP Cherry Point Refinery on July 14.

This comes after WSDA, cooperating agencies and the public set over 1,844 bottle traps for the world’s largest hornet. In a citizen science effort, the public set 1,080 of the traps.

The traps use orange juice and rice cooking wine, and mirror similar traps used in the hornet’s native habitat in Japan.

“This is encouraging because it means we know that the traps work,” said WSDA managing entomologist Sven Spichiger in a news release. “But it also means we have work to do.”

In a July 31 press conference, Spichiger said capturing the hornet, which the agency presumes is a worker but will be confirmed after testing, was not unexpected. The agency knew there was a nest late last year that had likely produced queens and male hornets, creating opportunity for hornets to escape and produce new colonies.

Five hornets had previously been confirmed in Washington and there were three detections in Canada after the invasive species arrived in North America for the first time last fall, probably by cargo ship.

The last hornet was discovered in Custer in late May and confirmed to be a mated queen. Spichiger said the detections of this, and the queen found in June in north Bellingham, helped eliminate the threat of possible new nests from those queens.

“This detection unfortunately means that we did get a nest that was able to establish somewhere in the Birch Bay area,” he said.

The hornets are known for their large size that reaches up to 2 inches, orange and black bodies, and aggression towards honey bees. The hornets have made a buzz among concerned citizens, even those outside Washington state, and stakeholders like Birch Bay beekeeper Ruthie Danielsen.

“I treat the bees like I do my goats, my dogs and my kitties,” said Danielsen, who became a beekeeper five years ago after retiring. “They’re a part of our family. That’s probably what’s so devastating about another thing that can come in and kill them. It’s really distressing.”

Danielsen said it’s not the hornet alone that worries her, despite the fact that the Cherry Point hornet was trapped about a mile from her six honeybee hives. The hornet is an added stressor on top of pesticides, other bees trying to rob her hives and Varroa mites.

Varroa mites are invasive species that came to Washington in the ’80s and carry diseases that can kill hives. One unmanaged hive threatens all of the other hives, said Danielsen, who treated her hives four times last fall.

The additional pressure of the hornet is especially dangerous for commercial pollinators, which use their honey bees to help pollinate fruits and nuts.

Danielsen, who was one of the first members of the Mt. Baker Beekeepers Association to spur the group into action in February, said she’s working with her former employer, BP Cherry Point Refinery, to put additional traps on its wooded property. Danielsen has three traps at her home and four others that she maintains on neighbors’ properties.

She’s also been calling on state representatives to co-sponsor the “Murder Hornet Eradication Act of 2020” bill that was introduced to the U.S. House of Representatives in May by U.S. House Natural Resources Committee chairman Raúl Grijalva (D-AZ). The bill directs the Department of the Interior to provide $4 million each year from 2021 to 2025 to states to provide a program for management, research and public education to help eradicate the hornet and restore affected bee populations, according to the bill. Currently, Representative Derek Kilmer from Port Angeles is the only co-sponsor from Washington.

“If the participation from the general public wanes, they’re going to need a lot more funding to keep this going,” Danielsen said, noting the labor it takes for WSDA workers to inspect over a thousand samples weekly.

WSDA plans to add about 40 more traps in Birch Bay that will be monitored daily, Spichiger said. The agency has been preparing to track the hornet locally. The next steps will be to follow a hornet back to its nest using sightlines or by attaching a tracking tag.

The agency has given itself a deadline of early to mid-September to locate the nest before the colony begins creating new reproducing queens and male hornets, Spichiger said.

For more information on the hornet, visit agr.wa.gov/departments/insects-pests-and-weeds/insects/hornets.