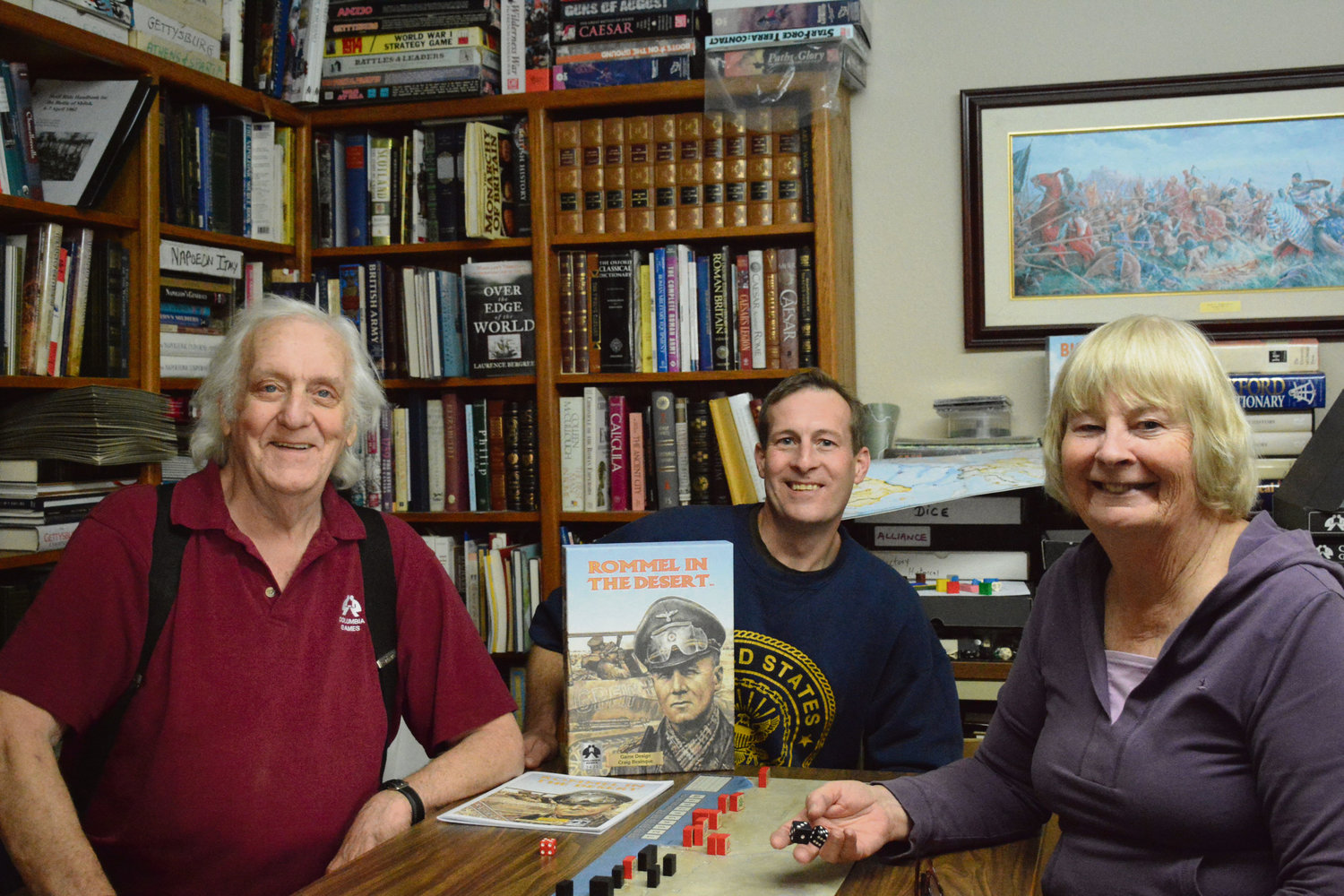 Tom, Grant and Penny Dalgliesh of Columbia Games. The Blaine-run business started nearly 50 years ago in 1972, and is now experiencing a high demand because of the pandemic.
Photo by Ian Haupt 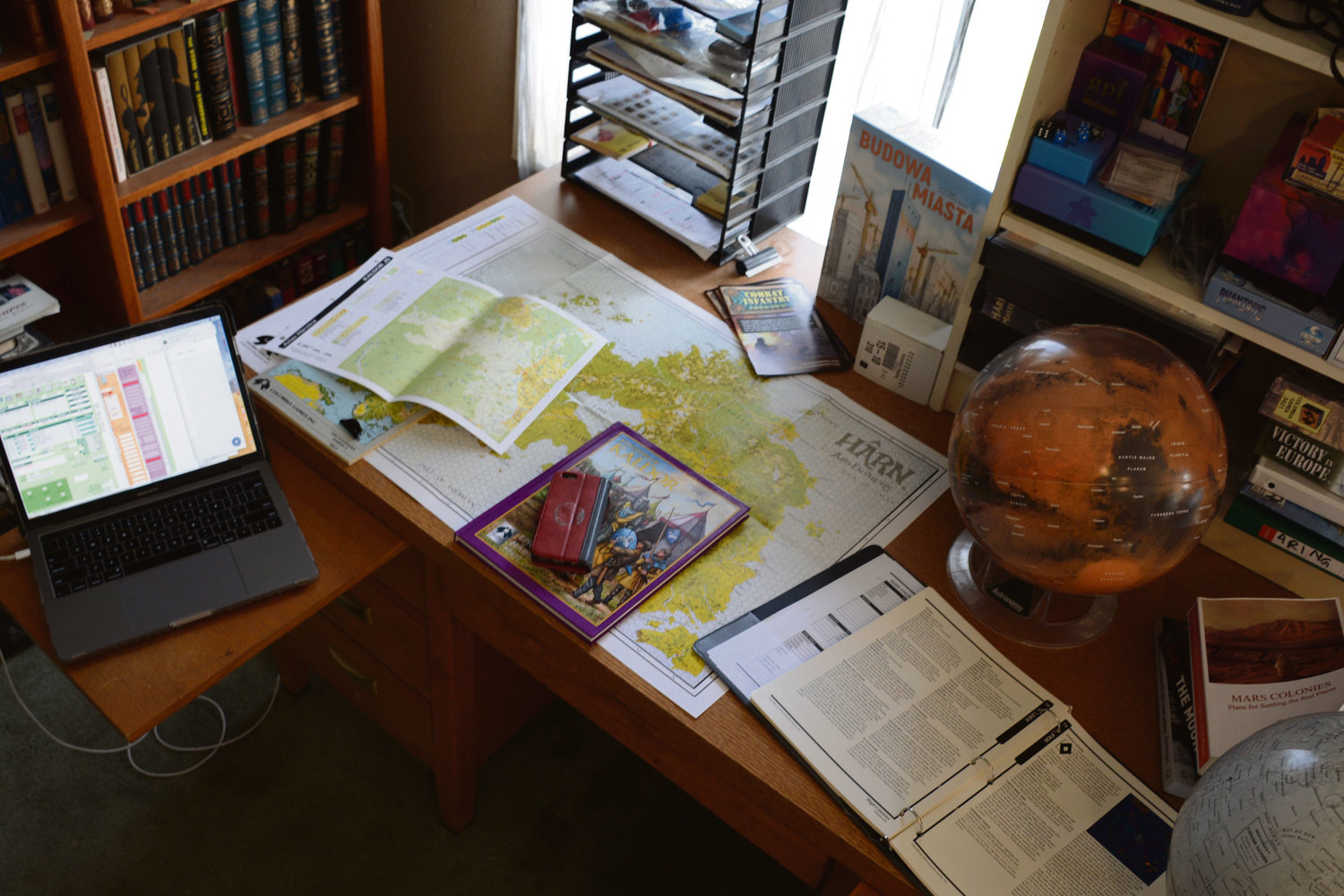 A map, texts and other materials for the creating and playing of Columbia Games role-playing games, HârnWorld and High Colonies.
Photo by Ian Haupt
Previous Next
Posted Tuesday, November 24, 2020 4:35 pm
By Ian Haupt

In the almost 50 years the Dalgliesh family has run a board game business, they say they haven’t seen sales as good as they are right now.

“We’ve been doing better this year than ever before,” said Tom Dalgliesh, founder of Columbia Games. He said it’s obvious – people have more time.

Tom suggested board games often help people through hard times. Two of the most popular board games in history – Monopoly and Scrabble – were released during the Great Depression.

Tom runs Columbia Games with his son Grant, and wife Penny. Originally from Vancouver, B.C., the Dalglieshes moved to Blaine to reduce shipping costs to their American customer base. Grant said U.S. buyers make up 70 percent of their sales.

Tom made his first game as a history student at Simon Fraser University where he was a member of the chess club. “So, I thought, ‘Why not come up with some games that are historical?’” he said.

Quebec 1759, the first game he and other chess club members created in 1972, was based on a battle of the same name between the British and French. It was a pivotal win for the British in the Seven Years’ War. What was noteworthy about this first game was its simplistic, strategic style, Tom said.

It was the first “block game” they created, which Grant said has become their niche. Essentially, the games consist of a board with a map, dice and plastic blocks with stickers on them.

“We are able to do more with less,” Grant said about the block games. “Depending on what stickers we put on the blocks, the game could be anything.”

The stickers recreate the fog-of-war because players cannot see the strength of their opponent’s pieces. They have more than 30 different formal games using this game genre.

From Ancient Rome to the American Civil War to mythical lands, the Dalglieshes have games set in many different historical periods and fantasy worlds. Their current work in progress, Rommel in the Desert, is a third edition strategic block wargame based on a World War II battle in North Africa between the Germans and the British and named after German general Erwin Rommel.

“It plays historically, except either side can win,” Tom said. “We tweaked the history a little bit so that both sides could win. Otherwise, there wouldn’t be much point to it.”

They have also turned some of their board games into computer games, Grant said. Through a PC gaming platform called Steam, four Columbia Games can be bought and played digitally. The Dalglieshs have also made their own role-playing games.

In the early 1980s, after the growing popularity of Dungeons and Dragons, Tom created his own world, called Hârn.

“If you don’t put the hat there, and read it in German, it means ‘piss,’” Grant said with a smile.

The HârnWorld fantasy role-playing game, which the Dalglieshes have developed and enhanced over the years with more than 150 supplements, is a detailed, medieval fantasy campaign with original plot lines and background stories, according to the Columbia Games website. These supplements may come in the form of new maps or box sets.

Columbia Games uses Kickstarter, a crowdfunding platform focused on creativity, to get funding for the games it produces. The company currently has 17 games on its Kickstarter website, bit.ly/33cjdGb, that the Dalglieshes will produce once people show enough interest, or back the product. They have 14 games on the crowdfunding website that have received enough funding to be created and are available for order.

Cities of Hârn is a HârnWorld update released in August that received 1,160 backers who pledged a total of $75,383. A new, deluxe version of a Columbia Games classic, Hammer of Scots, which is also available digitally, received 560 backers for a total of $63,725.

Two to three years after their release, games usually sell five times the initial kickstarter backing, Grant said. New releases account for about 30 percent of Columbia Games revenue, he said, with the remaining 70 percent coming from fans discovering games and updates after the initial release.

The Dalglieshes are now developing High Colonies, a futuristic, science fiction role-playing game that they call “hard sci-fi” as opposed to “space opera,” which Grant said involves “lots of aliens and laser guns.”

In the soon-to-be-released game, set in 2238, Earth is a wasteland and the 20 million people who survived the apocalypse are living in space colonies on Mars and other places throughout the galaxy. While many of the colonies are composed of nations, like the U.S., Russia and China, other colonies are corporate, run by companies such as Amazon.

Like all role-playing games, High Colonies has a story background that creates a world for players to enter and allows them to be whoever they want.

“You take on the role of a character, and then you live within that environment,” Grant said. “The more engaged you get in it, the more fun it becomes.”

He said High Colonies and HârnWorld are targeted as role-playing games for adults because of their complexity and depth. For both games, they have created a detailed history for each of the worlds they are set in that provides players with a great understanding for the environment they are in.

For High Colonies, Grant said he took the time to locate the planets in relation to one another as they would be in 2238 and figured out how long it would take to travel to each planet. They’ve also devised an economy with texts indicating which planets have a shortage or surplus of resources and then created trade routes between planets, he said. HârnWorld even has its own astronomy with constellations and zodiac signs.

The Dalglieshes continue to release more background information and data four times per year for HârnWorld to add to the game’s intricacy, which Grant said they hope to do with High Colonies if it gets the same amount of support.

“It’s filling in the details,” he said. “This High Colonies is a new thing that’s coming out, and it’s beginning really in terms of how much we’ll do, we’ll have to see. We’ll see how well it does, we’ll see if we can get a following that’s as loyal and as passionate as we have for the Hârn role-playing. If we do, we’ll be off to the races because this stuff depends on the passion of fans to really thrive.”