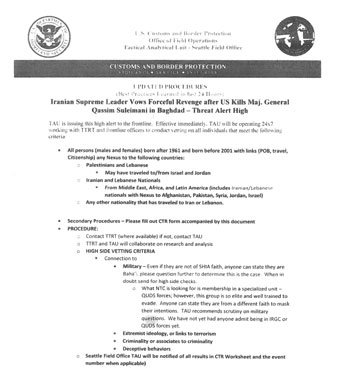 The directive issued January 3 by CBP’s Seattle Field Office calling for the enhanced inspection of travelers with Iranian backgrounds. CBP has denied the existence of the directive.
Posted Wednesday, October 14, 2020 2:43 pm
By Pat Grubb

The Council on American-Islamic Relations (CAIR) won an important skirmish in its fight to obtain documents from the U.S. Customs and Border Protection (CBP) regarding the January 2020 crackdown on travelers of Iranian backgrounds crossing into the U.S. at the Peace Arch port of entry. In an October 5 ruling, Judge Ricardo S. Martinez of the U.S. District Court Western District of Washington in Seattle ordered CBP to turn over documents that CAIR sought in a January 8 Freedom of Information Act request but had either not received or were redacted to the point of uselessness.

Following the January 3 killing of Iranian General Qassim Suleimani in a U.S. drone strike, CBP Seattle Field Office’s tactical analytical unit issued a “high alert” stating “all persons (males and females) born after 1961 and born before 2001 with links (POB, travel, citizenship)” to Palestine, Lebanon or Iran were to be vetted with extra questioning on their entry to the U.S. from B.C. Consequently, numerous U.S. citizens and resident green card holders of Iranian heritage were detained and held for hours and subjected to enhanced questioning.

On January 5, CAIR issued a press release that suggested that CBP had issued a directive calling for detaining Iranian-Americans; an assertion that was quickly denied by the CBP. In a national news break, The Northern Light published on January 29 the CBP directive issued on January 3 that called for the detentions and contradicted the statements previously made by the agency. (Ed. note: The Northern Light and writers Patrick Grubb and Jami Makan were awarded two 1st place awards in various news categories for its covereage in the Washington News Publisher Association’s 2020 Better Newspaper Awards announced on October 9.) Following CBP’s failure to respond to CAIR’s request within statutory time requirements (20 days), the organization filed suit on February 12. Two months later, CBP released four documents and withheld 124 pages that were later released with exemptions and redactions following the conclusion of an investigation. It then moved to have the action dismissed.

CAIR objected, saying CBP had failed to produce all of the documents requested and had wrongly applied exemptions to the materials that it had supplied. The judge ruled against CBP’s motion and granted, in part, CAIR’s motion for summary judgement. Martinez ordered CBP to search the emails of Adele Fasano, then-Seattle Field Office (SFO) director of field operations, the SFO assistant director and Mark Morgan, acting CBP commissioner in Washington, D.C,. and others and to report on the progress of the search by October 12. The judge also ruled that CAIR had demonstrated that the public interest lies in the release of the names of assistant directors and port directors playing a key role in the implementation of the policy, which touches on the civil rights of U.S. citizens and legal permanent residents. Accordingly, the exemption cited by CBP should not apply to the names of those individuals.

As well, changes to redactions must be accomplished within 30 days of the ruling and any other documents withheld must be turned over or the redactions removed unless another exemption is claimed.

Since the controversy erupted in January, there has been a quiet turnover in management in the Seattle Field Office and the Blaine port of entry. Fasano has been transferred to planning and analysis in Washington, D.C. and was replaced by Brian Humphrey in the summer.