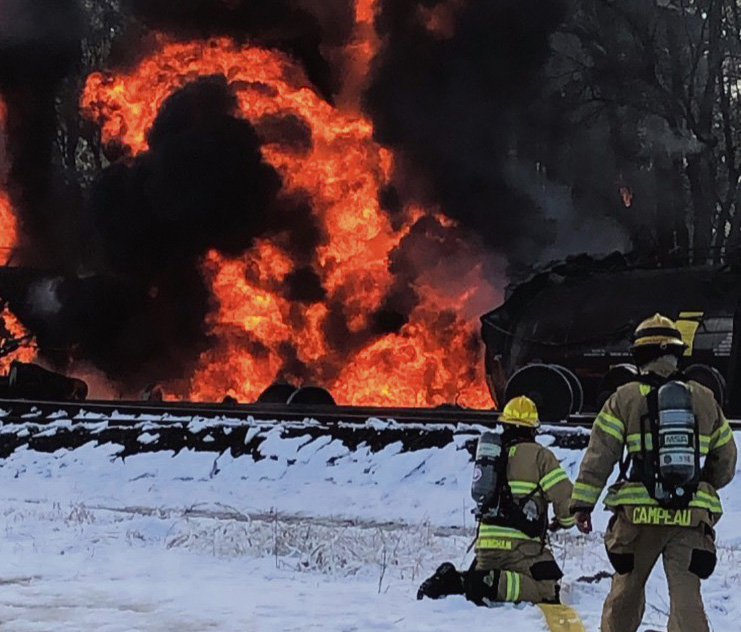 As investigations into the cause of the December 22 BNSF Railway derailment in Custer that forced business and home evacuations within a mile of the wreckage continue, crews finished clearing the toppled train cars on December 30.

The 108-car train was carrying Bakken crude oil from North Dakota to Ferndale refineries when what officials now say was 10 cars derailed just after 11:40 a.m. in the 7500 block of Portal Way. Five of the cars burned afire until 8 p.m. that night and a brief blaze erupted just before 9:30 p.m. the next night but firefighters extinguished it within an hour, said Courtney Wallace, regional BNSF Railway public information officer.

The train was traveling at 7 mph before the accident, making it a low-speed derailment, Wallace said. Train traffic was halted until the tracks were repaired while other train traffic remained open in Whatcom County, she said.

The two crewmembers aboard the train, people in the area and wildlife near the site were not injured in the derailment, said Dave Byers, Washington State Department of Ecology (DOE) response section manager, during a press conference the day after the derailment.

Wallace declined to link the rail accident to as many as 41 attempts to sabotage tracks this year in Whatcom and Skagit counties, responding to a question at the press conference.

“This is an ongoing investigation,” Wallace said. “We’re not going to speculate on cause or on the investigation.”

This derailment comes less than a month after two Bellingham residents were charged with one count of terrorist attack and other violence against a railroad carrier after allegedly attempting to place a shunt on north Bellingham train tracks, which can cause derailment, according to the U.S. Attorney’s Office for the Western District of Washington. Both defendants were released November 30 from Whatcom County Jail on appearance bond. They are scheduled for trial February 16 after they were arraigned and pleaded not guilty on December 17, according to minutes from their hearing.

The FBI’s investigation of the derailment is routine, Whatcom County Sheriff Bill Elfo said during the conference. A spokesperson for the FBI’s Seattle field office said the FBI has a memorandum of understanding with the National Transportation Safety Board in Washington to investigate if crime is involved in an accident. If it’s determined a true accident, the FBI would leave the investigation, the spokesperson said.

The FBI spokesperson said he couldn’t confirm reports of a FBI Joint Terrorism Task Force Officer asking Custer residents for surveillance footage before the derailment because the investigation is ongoing but “it’s logical in the course of an investigation that we’re asking the public for tips.”

Joel Hernandez, an employee of 15 years at Beacon Battery and Tire in downtown Custer, said he’s accustomed to feeling the ground shake beneath his feet as the trains pass by his store but not to the force of the derailment. Hernandez was writing a receipt for a customer when he stumbled, heard a loud noise and ran to see flames towering in the sky.

A quick 911 call confirmed he needed to evacuate the area immediately.

“I was terrified because I had my son with me,” Hernandez said. “I wanted to leave as far as possible and quick, but I also didn’t want to not close down the store.”

Customers fled, leaving tires behind as Hernandez did a 10-minute store closing and drove his 7-year-old son home. Once safely at home, Hernandez said he took time to process the event. “I was like ‘this is what you see in a movie’ and then to see it in real life was shocking,” he said.

Despite the Wednesday night fire, the train track reopened at 3 a.m. December 24 after BNSF crews inspected, rebuilt and tested the tracks, Wallace said. Trains will operate at reduced speeds as cleanup continues, the DOE said on Twitter.

Byers said during the press conference that the department believes oil contamination was contained to the site but does not yet know the amount spilled. Responders will need to calculate the amount of oil that escaped from the three ruptured tanks, burned with the fire and how much was left in the tanks.

“As far as crude oil derailment, spills and fires go, this incident could not have occurred in a better location with regard to minimizing the offsite environmental impacts of this,” Byers said.

Soil contamination is likely in the area and a full cleanup is expected to take at least a few months, Byers said. He said the DOE will determine whether wetlands and groundwater were affected.

“Washington has some of the highest expectations for how clean is clean and when we end the final cleanup as a result of this incident,” Byers said during the conference. “Ecology will be monitoring that and will be involved until we are confident that those cleanup endpoints have been met.”

Ty Keltner, a DOE spokesperson for spills prevention, preparedness and response, said cleanup cost is one of the last things to be determined and that could take several months.

Crews began removing the cars from the scene on Tuesday afternoon after they finished removing oil from the cars Monday this week, Keltner said.

Firefighters also operated roving air monitors, later maintained by DOE, to detect hazardous fumes like benzene. As of December 29, the air monitors were still on scene and hadn’t detected a threat to first responders or the public, Keltner said.

State and federal legislation helped mitigate the severity of the accident, including federal regulations that improved train-car safety and design on the DOT-117 tank cars derailed in Custer, Byers said. “That likely contributed to minimizing the amount of oil that was released and the safety of the public in this incident.”

Representative Rick Larsen (WA-02), a senior member of the House Transportation and Infrastructure Committee, said in a statement he worked closely with former President Barack Obama’s administration to make oil by train safer but is concerned by the recent derailment. “Clearly, there is more work to do,” he said.

Custer roads that remained closed following the accident reopened on December 30, according to a Whatcom County Public Works tweet.

As for Beacon Battery and Tire, owner Mark Beckwith said business had been down with the road closures, even though people could access the store from the north. The business, which reopened on December 26, has had a front-row view of crews cleaning up the accident around the clock.

“Things happen no matter wherever you are, you don’t have to be in downtown Seattle for things to happen. You can be in Custer, too,” Beckwith said. “It’s a reality that it’s a very active train line.”

BNSF has established a claims hotline for people or their property affected by the derailment at 866/243-4784. Anyone can report tips of suspicious activity to tips.fbi.gov.

This article has been updated from the print issue to include the train cars were cleared on December 30 and to correct a date.