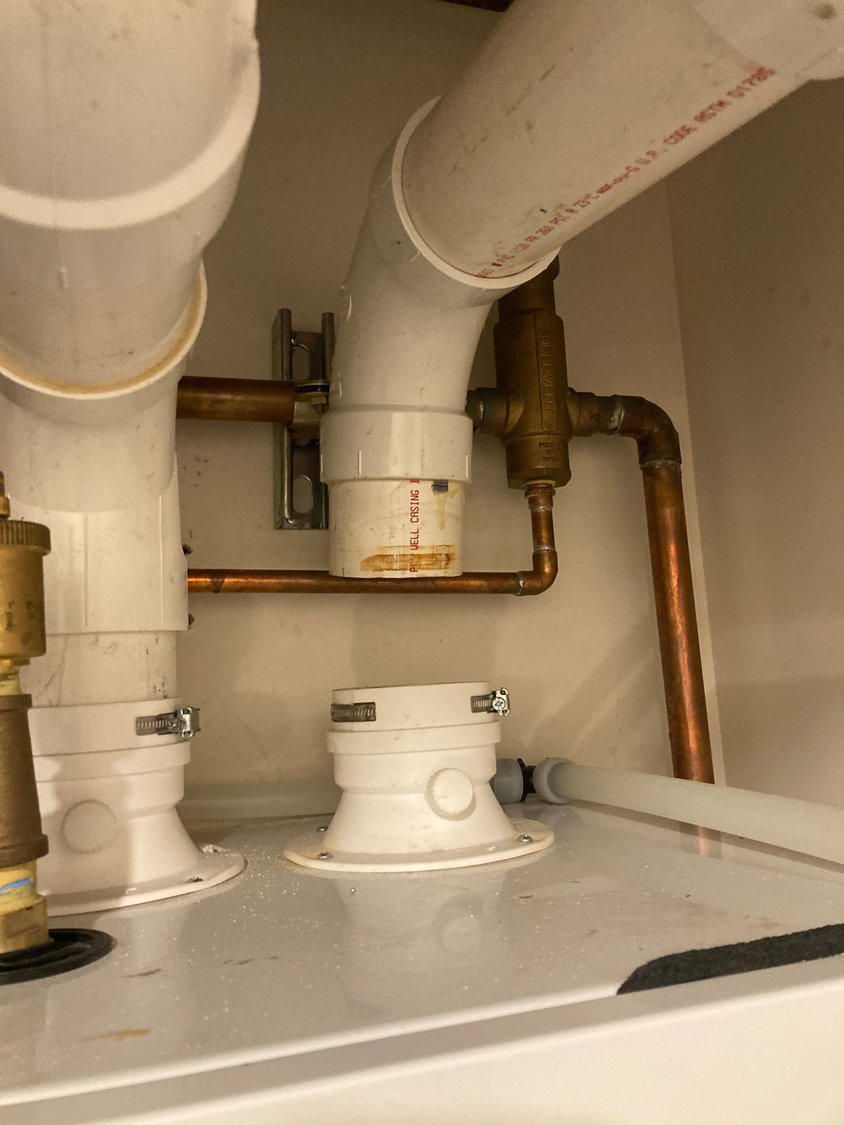 The exhaust flue was separated from the boiler allowing carbon monoxide to escape into the house.
Courtesy photo
Posted Wednesday, December 29, 2021 5:01 pm
By Pat Grubb

The apparent cause of death for a longtime Point Roberts couple appears to be due to the faulty installation of a radiant heating system.

Gail Amundsen, 61, and Murray Church, 67, were found dead in their home on Thanksgiving Day evening. The pair were discovered by family friends who were asked to check on them after their children had been unable to make contact with them since November 21. Church was lying in bed while Amundsen was found in an adjoining bathroom.

The couple had moved into their newly constructed home on August 9. It was heated by a high efficiency Triangle Tube Prestige Solo 110 condensing boiler, which can use either natural gas or propane for its fuel source. It comes set up for natural gas; it must be converted to use propane. The installation guide contains numerous warnings about the dangers of running the boiler on propane without conversion stating serious injuries or deaths can occur.

On December 3, Point Roberts assistant fire chief John Shields and two friends of the family filmed Jerry Amundson, a Blaine heating and air conditioning contractor, as he examined the boiler. He discovered that the original installer, Andgar Heating and Cooling, had failed to replace the natural gas orifice with one designed for propane.

Regardless of fuel type, the Prestige installation instructions for the unit call for the installer to run a series of tests and complete a checklist that will determine gas pressure, indicate the fuel source, and determine temperatures and combustion readings for CO2, O2 and CO ppm. In addition, the manual specifies that there must be CO monitors in the room containing the equipment as well and in sleeping areas. A sticker attesting that the equipment has been converted to propane must be affixed to the exterior, signed and dated by the installer including the orifice size and propane kit number and gas pressure. A photo of the boiler shows no such notice.

The higher energy content and gas flow would result in higher internal temperatures and pressures. A slight delay in ignition would result in explosive pressures being generated; a photo of the exhaust vent shows it has separated allowing CO and other gases to be released into the house. Point Roberts fire district personnel encountered CO levels of 1300 ppm in the main living floor and 1800 ppm in the basement.

The U.S. standard for CO levels is a maximum of 35 ppm for a 1-hour exposure (not to be exceeded more than once a year) and a maximum of 9 ppm for an 8-hour exposure, again just once a year. Exposure at the levels found in the residence would lead to a loss of consciousness in less than an hour. As CO is colorless, odorless and tasteless, it is especially dangerous to individuals who are asleep.

Despite the fact that Point Roberts has never had natural gas service, this is not the first time that Andgar has failed to convert a gas-powered device to propane. In 2020, resident Margot Griffiths had an on-demand water heater installed by the company. After the installer had left, she noticed an odor of propane and called 911. The fire department arrived and advised that she had a gas leak. It was later determined that a part intended for use with natural gas needed to be replaced with its propane version. In compensation for that and being without hot water for three days, the company offered her a free furnace checkup.

“Andgar’s heartfelt condolences and prayers are with the families of Gail Amundsen and Murray Church. Their deaths are a tragedy, especially this time of year when families get together to celebrate the holiday season.

“We assume that a further investigation will be undertaken to determine the cause of the CO leak. We hope this will bring a measure of closure for the couple’s children, and out of respect for the process, we will have no further comment at this time.”

Despite the failure of the boiler flue pipe, the couple still need not have died. Since 2011, Washington state law requires new homes under construction to have a CO alarm to be installed outside of each sleeping area in the immediate vicinity of bedrooms, and on each level of the dwelling. Standard practice is to also install an alarm in the garage. The alarms must be hard-wired with a back-up battery and connected to other alarms so when one detector is set off, all the detectors sound the alarm as well. (In homes constructed before then, any work that requires a permit also triggers the requirement for CO alarms.)

Despite this, neither the fire department nor the sheriff’s department found any CO monitors installed in the new home. Gary Orr, owner of Shoreline Electric, installed the electrical system in the house. Reached by The Northern Light, Orr said, “I can guarantee you that there was a CO alarm installed in the living room at the time the house was inspected by the county.”

When asked about the need for multiple alarms, Orr said there was a conflict between what the state and county required, and that people typically used the more relaxed county standards. However, the Whatcom County Plan Review and Construction Guide is equally restrictive as it incorporates Washington Administrative Code into its guidelines. Given the county and state requirements and the home’s sleeping configurations, the house should have had a minimum of four CO detectors and possibly more.

The home was constructed by Point Roberts’ Optimum Contracting owned by Eric and Christina Johnson. When contacted for comment about the deaths, Eric Johnson replied, “Very sad.” He was unaware that Andgar had failed to convert the boiler for propane use nor was he aware that the house contained no CO monitors. “I don’t know how it could have passed final inspection without those monitors,” he said.

Approving residential electrical work is the responsibility of the Washington State Department of Labor and Industries. When the Bellingham office was contacted, The Northern Light was told that inspectors would also examine hard-wired alarm systems before signing off on the work.

The Northern Light contacted Whatcom County Planning and Development department officials and asked how the house was able to receive a final occupancy permit given the obvious deficiencies with the furnace installation and the lack of CO detectors. They were also asked if the county had begun a review of other projects given occupancy permits by the same county employee or other projects that involved Andgar and/or the contractor and electrician that worked on this particular house.

In response, planning department assistant director Steve Roberge replied, “Whatcom County is aware of the tragic occurrence at 549 Calder Road in Point Roberts. We are still learning more details about this situation and extend our deepest sympathies to the family and friends of Gail Amundsen and Murray Church, longtime residents of Point Roberts. The safety of our community is our paramount objective, and the process of reviewing police, fire, and other related reports is underway. We will continue to work with our partner agencies to ensure the highest standard of safety here in Whatcom County.

“According to preliminary reports, carbon monoxide poisoning was the cause of the deaths, and the source of the carbon monoxide was likely related to a furnace located in the basement of the home.

“We know that the house was inspected by our staff prior to occupancy. At the time of inspection, the house was approved for occupancy. Carbon monoxide detectors are required for new construction and are included in the final inspection review.

“We understand that the community wants to know more about the circumstances surrounding this tragedy, and we appreciate your patience as we painstakingly work to shed light on them.”

Whatcom County deputy chief Kevin Hester confirmed in a December 13 email to The Northern Light that the sheriff’s department investigation into the deaths had been closed as the deaths were classified as “accidental.”