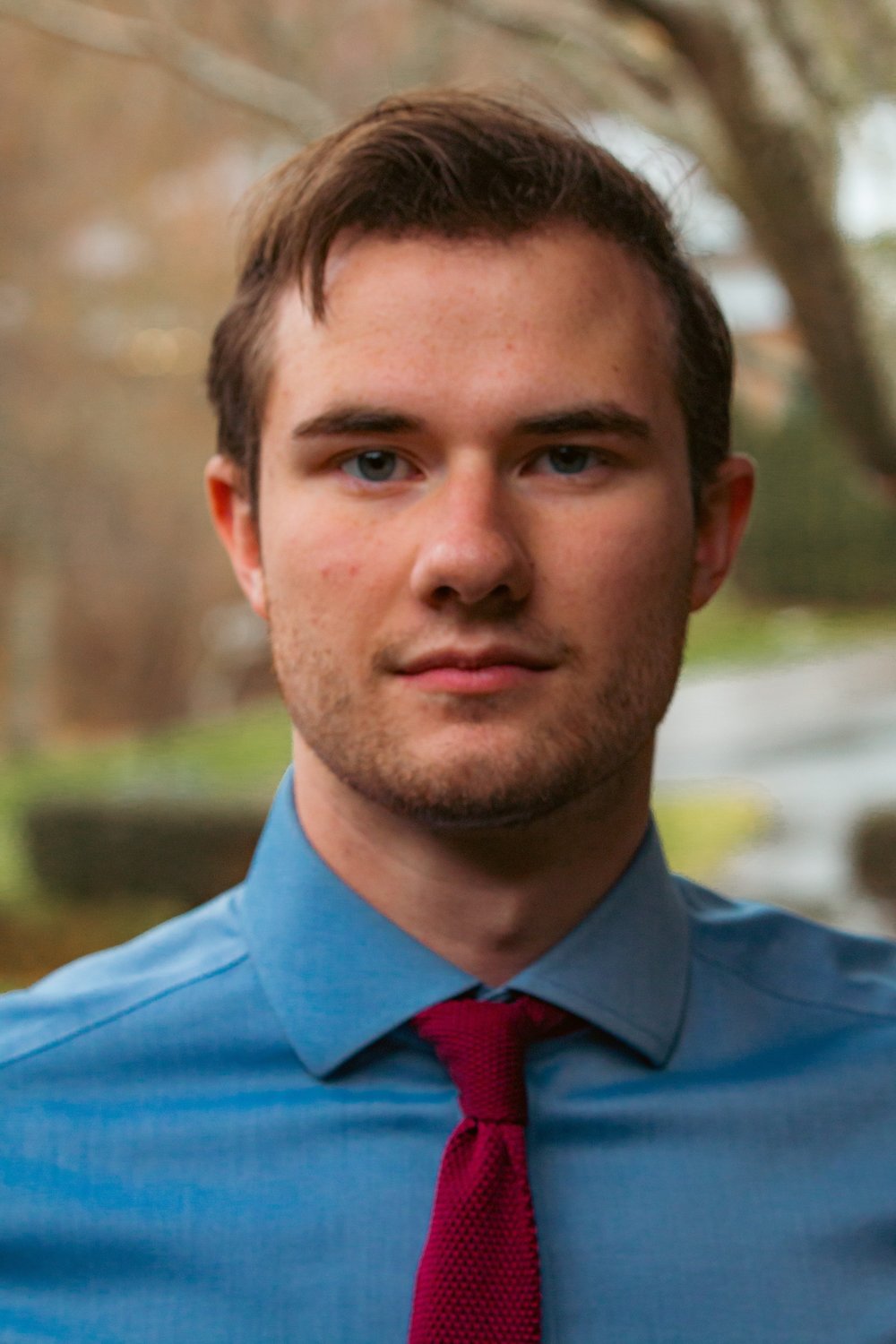 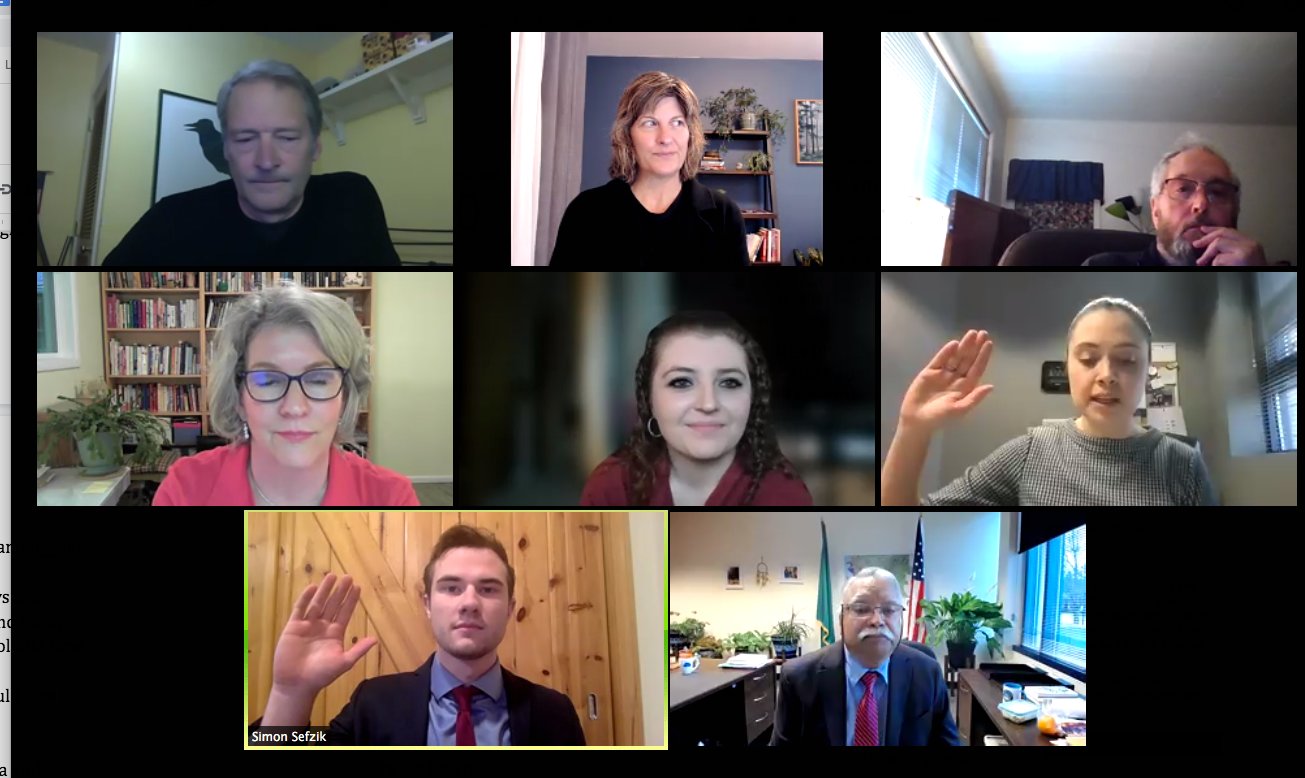 Whatcom County Council voted 4-2 to appoint 22-year-old Simon Sefzik (R-Ferndale) as state senator for the 42nd Legislative District to replace the late Doug Ericksen.
“We are not here, in Whatcom County, a conglomeration of red and blue precincts,” Sefzik said during the meeting. “Instead, we come together to help those in need – whether it’s in flood relief or housing affordability, in homelessness or crime – and give them the support they deserve. I believe we need a young, fresh energetic voice to represent Whatcom.”
Sefzik is the youngest current member of the state legislature and the youngest senator on record, said Erik Smith, a spokesperson for the state senate Republican caucus.
Sefzik recently graduated from Patrick Henry College, a private Christian school in Virginia, with a bachelor’s degree in American politics and policy. He interned for the White House Coronavirus Task Force before being hired full time in the White House Management Office. In 2021, Sefzik distributed Covid-19 vaccines while working as an operations and logistics coordinator for Nomi Health in Denver, Colorado.
According to his resume, Sefzik has also volunteered for the Whatcom County Republican Party since 2013 and interned in the office of U.S. Congressman Ted Budd.
County council was in charge of voting for a new state senator after Doug Ericksen died December 17, 2021, battling a month-long case of Covid-19. Ericksen had held a seat in the state senate since 2010 after serving as a 42nd Legislative District state representative since 1998.
“We are looking forward to having Simon join our team, and continue the great tradition of leadership established by Senator Doug Ericksen on energy, agriculture and water issues,” said John Braun (R-Centralia), Senate Republican leader, in a statement.
Sefzik listed his top priorities as flooding relief, addressing the needs of people experiencing homelessness, affordable housing, agriculture, police reform and education.
During a special December 22 meeting, council voted to set a deadline of December 31 for the Whatcom County Republican Party to submit three nominees for the senate position. The nominees selected were: Sefzik; Ben Elenbaas, a current county councilmember who grew up on a dairy farm and has spent his career working at Cherry Point; and Tawsha Thompson, who grew up on a dairy farm and spent nearly 25 years as a city of Bellingham police officer.
County council was expected to vote on the appointment during a January 4 meeting, but delayed the vote so the nominees could answer a 20-item questionnaire. Former councilmember Rud Browne proposed the questionnaire, saying it would create a more transparent selection process for the public. Much to the Whatcom County Republican Party’s dismay, the appointment was delayed until January 11, one day after the state legislative session convened.
Before the vote, council had the chance to ask the nominees questions on things such as their stance on encouraging mask and vaccine use and their top priorities, among other individual questions. Elenbaas said, if appointed, he planned to continue serving on county council, which raised a debate among councilmembers on whether Elenbaas would be doing a disservice to constituents if he tried to fulfill both roles.
During the January 11 meeting, councilmembers Todd Donovan, Carol Frazey, Barry Buchanan and Kaylee Galloway – who won Browne’s seat – voted for Sefzik. Councilmembers Kathy Kershner and Tyler Byrd voted in favor of Elenbaas as senator, while Elenbaas recused himself from the vote.
“This is a process that strengthens our government and gives more hope to all of the people of Whatcom County,” Whatcom County Executive Satpal Sidhu said. “Congratulations Simon, I look forward to working with you.”
Whatcom County district court judge Angela Anderson swore Sefzik into office at the end of the virtual council meeting. Sefzik is expected to join the other senators in Olympia this week.
Sefzik will serve as senator until January 2023. In the questionnaire, he said he wanted to ensure constituents were represented well during the 2022 legislative session before deciding to run in the November election.
Sefzik will serve on the health care, higher education, and housing and local government committees.
“I believe Olympia needs new leadership,” Sefzik said. “I believe Olympia needs people who are not necessarily politicians, but instead, people that believe in our capacity and ability to come together and work together and make a meaningful difference in the lives of people of Whatcom County.”
To view Sefzik’s responses to county council’s questionnaire, visit bit.ly/3FcHUCA.