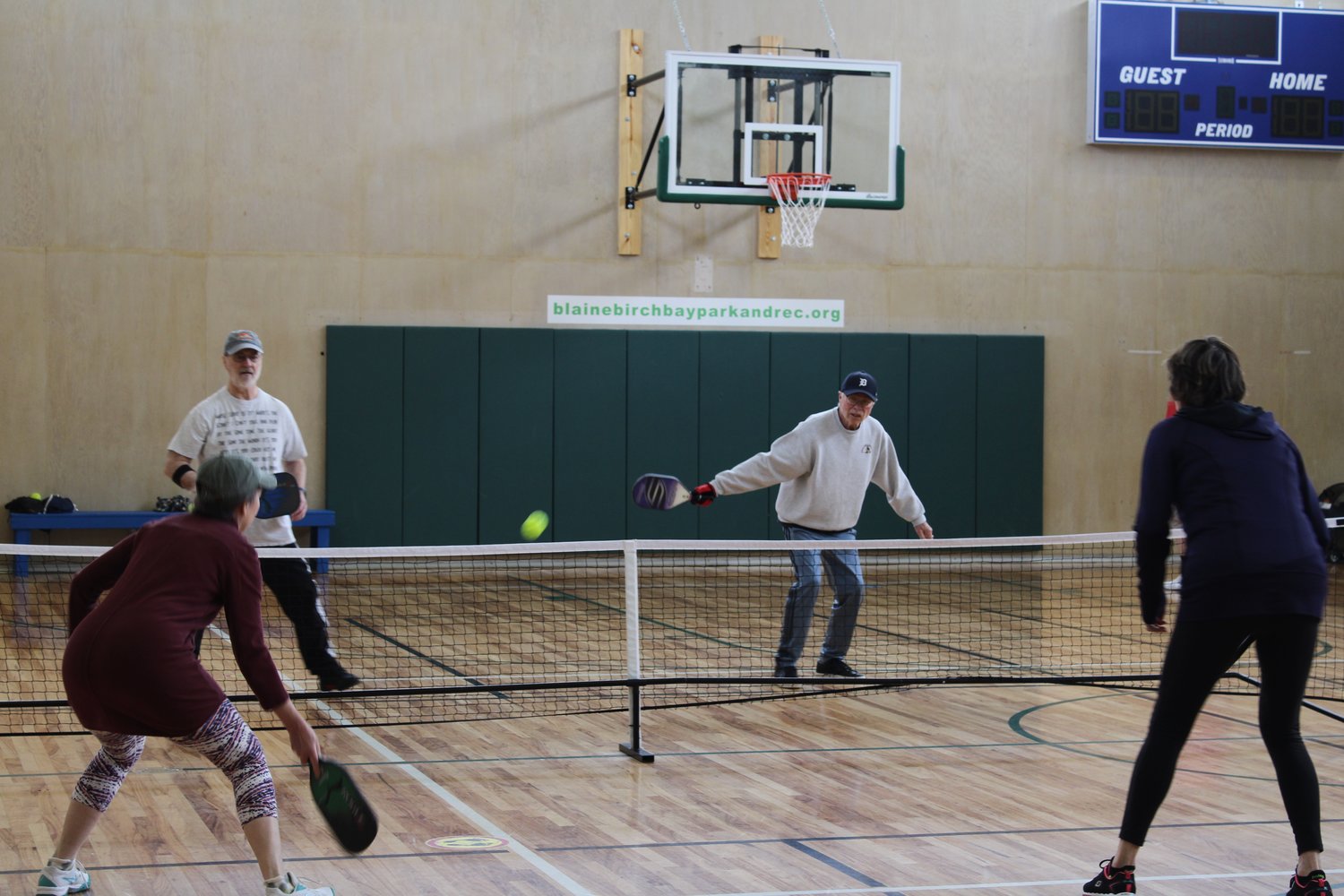 Community members play a game of pickleball at the Birch Bay Activity Center (BBAC) on April 4. The BBAC hosts a variety of pickleball programs for all ages and skill levels.
Photo by Hannah Cross
Posted Wednesday, April 6, 2022 4:36 pm
By Hannah Cross

Pickleball was invented in 1965 in Bainbridge Island and gained popularity over the years, which led to the founding of Pickleball, Inc. in 1972 to keep up with the demand for paddles, balls, nets and other gear.

Blaine-Birch Bay Park and Recreation District 2 acting program manager Kaileigh Hubbard said community interest around pickleball at the Birch Bay Activity Center (BBAC) has grown exponentially since the beginning of the pandemic. “It gave people the chance to connect while safely distancing,” she said.

Hubbard said the passing of pickleball as the state’s official sport might lead to increased conversation and funding for the BBAC program, which has about 100 players.

Coach and pickleball teaching professional Mark Livingston said his job at the activity center is to help facilitate the growth of all players regardless of skill level.

He said the activity center offers three programs, the first being an introduction program for people who have heard of pickleball and want to get started but might not know where or how to. “This six-hour program teaches players how to score a game, hit basic shots and move safely on the court,” Livingston said.

The introduction program is taught as a series of three, two-hour sessions. The cost of the program is $36 per person and four players minimum are required to hold each event.

The second program, Workout with Coach Mark, customizes drills and drill games to address challenges players may experience in their game for $12 per each two-hour session. “No matter your skill level, this program lets you work out and practice gameplay with like-skilled players,” he said.

Livingston recently helped implement the third program, the Junior Development Program, which will feature ongoing lessons, practice sessions and the opportunity to develop skills and gameplay performance for those ages 10-18. The cost is $12 per person per session, with registration being capped at eight players per session.

Brian Berg has been playing pickleball for three years with his wife. Berg said they play pickleball 8-12 hours a week, split between the BBAC and Semiahmoo Resort.

Berg said Livingston is an excellent instructor for both beginning and advanced players. He also said he is happy the BBAC opens its doors to everyone in the community.

“This is a fast growing sport, with few places to play,” Berg said. “The courts at Birch Bay Village are private, the courts at Semiahmoo are semi-private and only the activity center has public courts.”

Berg encourages those who might be on the fence about playing to come to the activity center and give it a try. “With a few hours of instruction, you can get a good workout and meet new friends,” he said.

Livingston also encourages prospective players to take advantage of BBAC’s introduction program. “It’s an opportunity to engage in something fun, to interact with others and to form a social connection with your community,” he said.

He also said studies have shown positive health, social and psychological benefits associated with playing pickleball. “This is an activity that is within reach for most people regardless of age because it doesn’t require tremendous physicality.”

As players get older and their mobility decreases, their athletic opportunities may decline as well, Livingston said. “This is an opportunity for them to play and master a sport alongside their community.” Those looking to engage with the various programs can visit the parks and rec website bbb.parkandrec.org for more information.

“When you step on the pickleball courts, you hear laughter and comradery between players,” Livingston said. “We encourage more of the community to join in.”