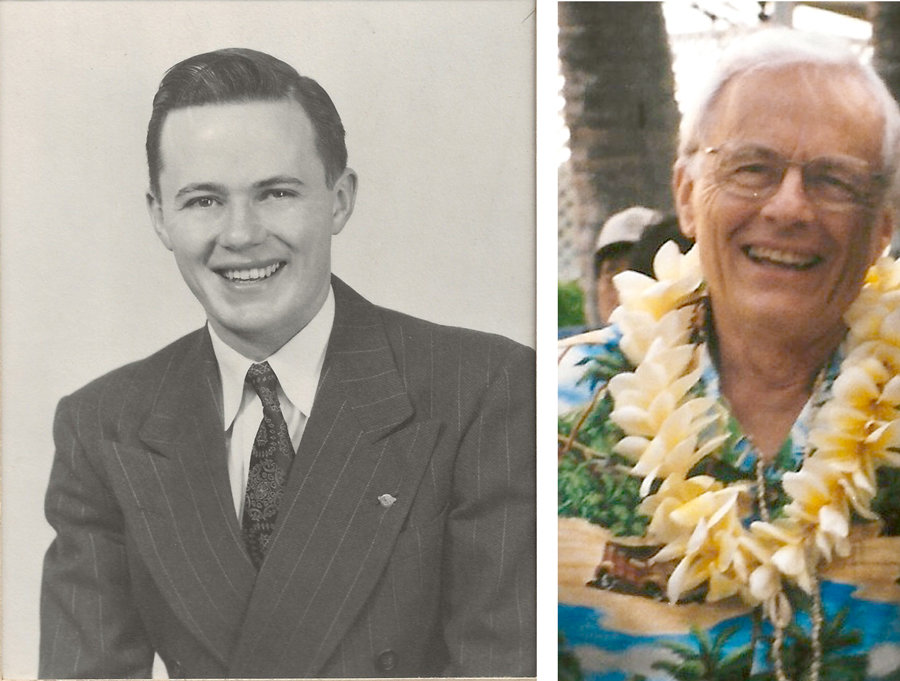 On Monday, October 25, 2021, in the embrace of his family, Guy Manuel Hughes peacefully passed on to be at rest in the warmth and glory of the Lord and to be reunited with beloved wife Joanne, his dear brother Wilbur, sister Mildred, and his parents Violet and Guy.

Guy was born in Seattle in 1924. His early years were punctuated by several moves, and by middle school, the family settled in the Mt. Vernon area where Wilbur and Guy helped their father and grandfather with family businesses, including door-to-door delivery of kerosene, fuel oil, and ice, via horse-drawn wagons.

All the siblings graduated from Mt. Vernon High School and WWII drew Wilbur to service in the U.S. Army, followed by Guy’s enlistment in the U.S. Army Air Forces in 1943. He served in a bomber group and was in involved in several campaigns in virtually all corners of the Pacific theater, from Borneo to the Philippines and, most perilously, mainland Japan. Serving as a radio operator and aerial gunner, he and his squadron received multiple commendations for their actions in combat. He also served in the occupation forces in Japan, followed by his discharge at Ft. Lewis, WA.

Returning to the Pacific Northwest, Guy worked in several occupations ranging from the “green chain” in lumber mills to bank teller, securing a position at Yakima Hardware as a route salesman with clients in many east slope towns.

In 1956, Guy met and married Joanne Marie Mauch of White Swan, WA. Shortly after marrying they moved to Wenatchee as it was centered in his sales territory.

June 1957 saw the birth of son Brian Anthony Hughes and in 1959 they moved to Idaho Falls, ID, where he was hired to serve as the first chairman of the newly established Chamber of Commerce, promoting the area’s businesses, events, and tourism.

The Chamber was member- and contributor-supported, so the early years were lean; Guy augmented the family income with side jobs such as working in the pole yard for Idaho Power and Light and as a salesclerk at Skaggs Drugs.

In addition to a full work schedule and busy family life, Guy and Joanne were very active in civic pursuits such as Knights of Columbus, Civitan and Lions clubs, and Catholic Women’s League. In addition, they were charter members of Young Democrats of Idaho. Guy was later lauded as being instrumental in campaign efforts for aspiring Senator Frank Church.

1961 brought a career change as he started with Bonneville Power Administration, a federal agency involved with the production and distribution of electricity from most of the Northwest’s dams. His roles there varied, but primarily were as liaison to utility companies and consumers as they sought data on BPA’s products and policies. He received many commendations acknowledging his diligent efforts during his 34-year tenure, serving in Idaho Falls, Walla Walla, and Seattle.

In 1995 Guy chose to retire as he assumed a new role of caregiver while Joanne fought the cancer that took her in October of that year. After her passing, Guy strove to live out the retirement life that he and Joanne had envisioned. He traveled, albeit not as extensively as they had planned, but he did find himself in a fortunate position to live on “the Big Island” of Hawaii for almost eight years. He came to embody, and share, the Aloha Spirit with all of his family and friends, whether they visited Hawaii, or he brought it back to the mainland.

As a growing group of grandchildren and the support of family beckoned, Guy moved to Whatcom County in 2006 where he plugged into a new network of friends and activities. One summer he invented a new pastime where he would cart a kayak, along with a book and a music player, to the edge of Drayton Harbor and proceed to drift on the gentle tide while reading his book.

It should be noted that Guy was athletically gifted and excelled in many pursuits, from a 70-year ski career to bowler to hiker to dancer to what became his passion: distance running. In his late fifties, in support of a neighbor needing motivation while recovering from a health issue, Guy commenced a running hobby that included several completed marathons, several of which took place in his mid-seventies.

Guy resided at the Stafholt Good Samaritan Community in Blaine from March 2017 until his passing, and his family is grateful for the loving care and grace that the staff there showed him every day.

A public observance and celebration of Guy’s life is planned for February 2022. In lieu of flowers, the family requests a donation in memory of Guy Manuel Hughes to Wounded Warrior Project, World Vision, or an organization of the donor’s choice.