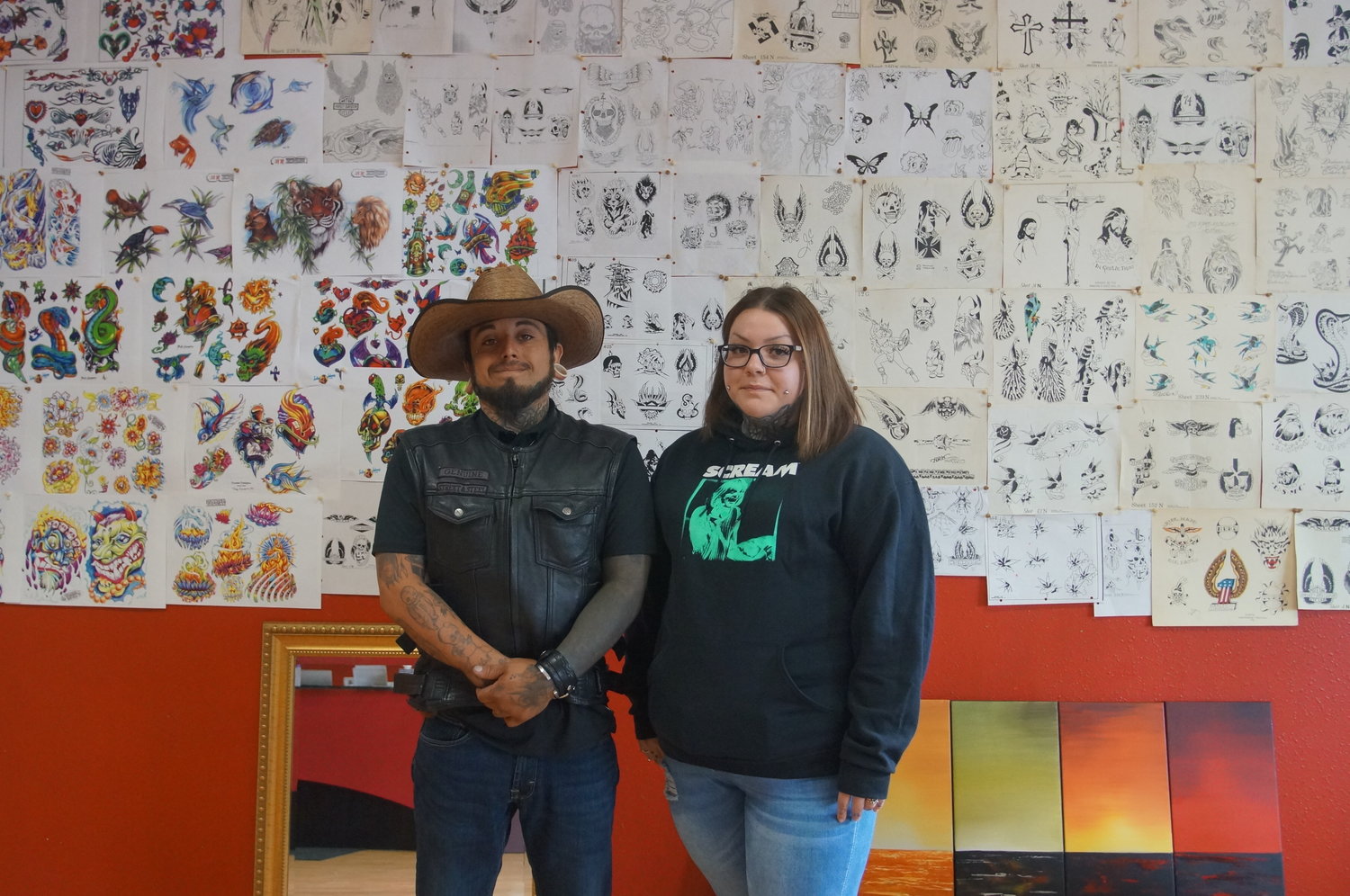 Eclectic might be the first word that comes to mind when walking into Traditional Ink, the new tattoo shop at 477 Peace Portal Drive. A glossy green motorcycle stands in front of the window, artwork plasters the walls, mint-condition action figures showcased, a colorful mural fills the back wall and a shoji screen divides the back room.

Traditional Ink’s eclectic environment mirrors the story of co-owner Dev Saucedo’s 16 years as a professional tattoo artist. Dev grew up in Globe, Arizona, a small town outside of Phoenix, where he met his wife and Traditional Ink co-owner, Brittany Saucedo. Dev’s career has taken him to North Platte, Nebraska; around the Phoenix area and now Blaine.

Dev’s tattoo prices range based on size and detail. He charges $200 an hour for tattoos and basic piercings are $60.

Although Dev has owned tattoo shops for 10 years, he never desired to own a business when he was younger.

“For the longest time, I just wanted to work underneath somebody and learn and obtain as much knowledge as I could,” Dev said. “So when the real world came out to get me, I was ready.”

Dev worked under his mentor for six years and periodically ran the shop in North Platte before working in Chandler, Arizona. Two months after Dev started working at the Chandler shop, the owner suddenly left for Europe. The shop fell into Dev’s hands and he didn’t hear from the owner for more than six months.

“It was him trying to see if I was ready,” Dev said. “The financial backing was always there.”

Dev said the transition from being an artist to an owner was a love-hate relationship. Once he committed to having a shop, Dev put himself through business school and later earned a degree in audio tech engineering.

After graduating, Dev and his mother made a dual business in Phoenix – one side was his mother’s 40-year-old salon and the other was his tattoo shop. But when Dev’s mother died, he got the itch to move again.

“We wanted to refigure what we wanted to do with the business, so we decided to come up this way because it’s nice and slow and steady,” Dev said.

Dev said he enjoys meeting people from different walks of life and listening to their stories. He said it’s about what he can do for his community; the job is not just about the tattoos, it’s more personal.

“I’ve been a lifetimer in the industry and I really love it. Year in and year out, it’s always something different,” he said. “We love coming to work every day. Always a new project every day.”