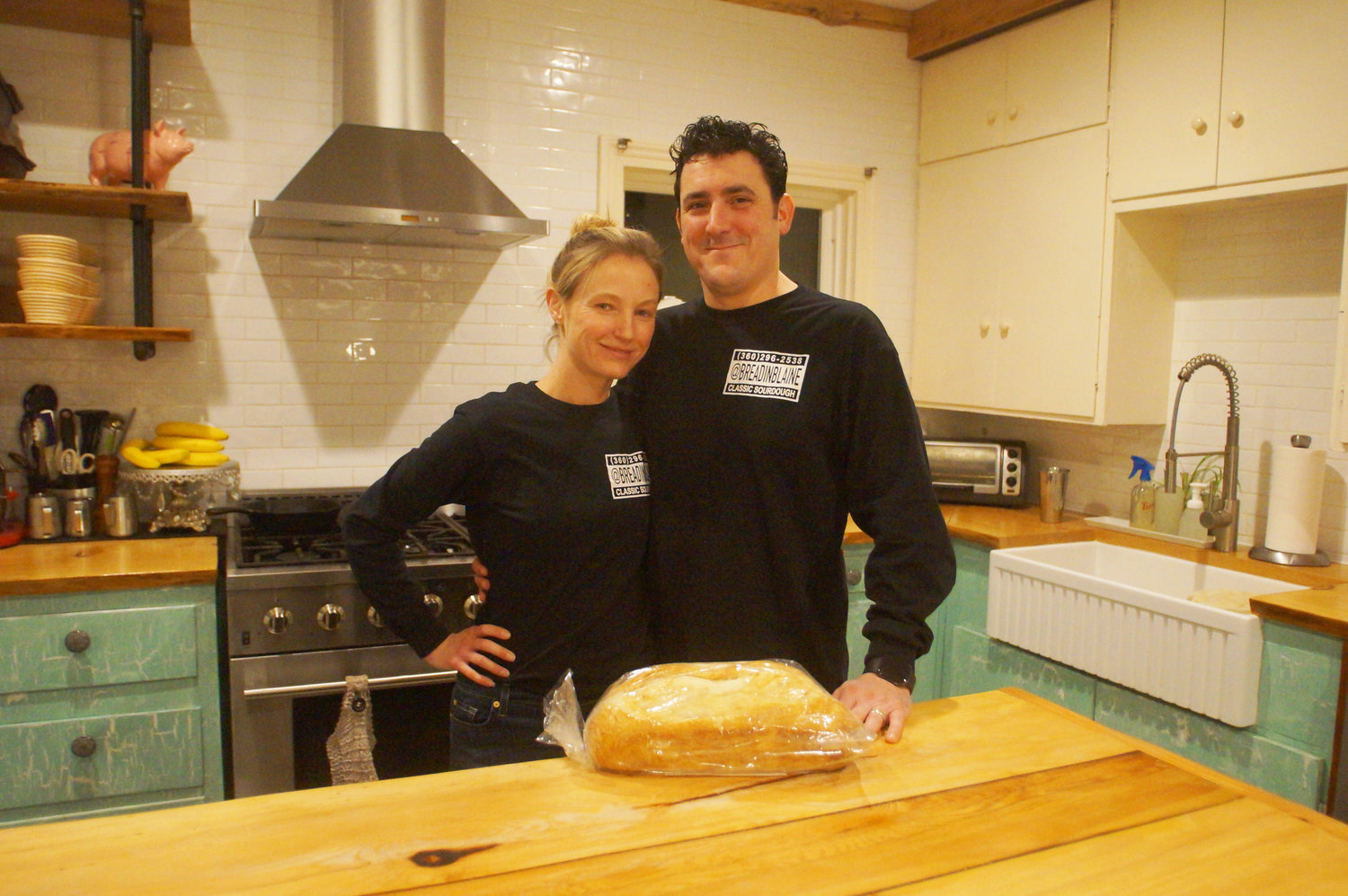 Anna and Mark Johnson in their kitchen, where they bake 20 loaves of sourdough bread daily.
Photo by Grace McCarthy 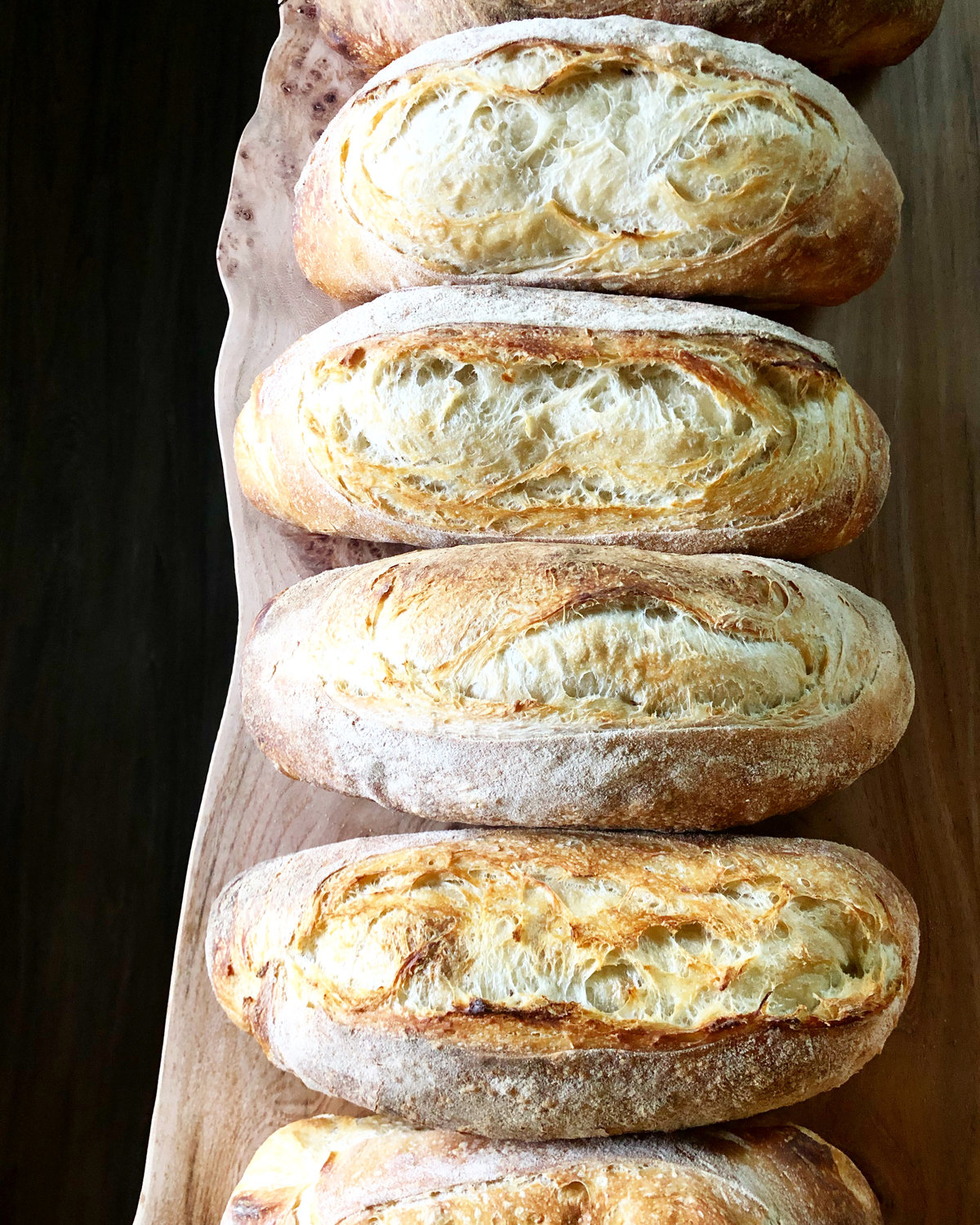 Years of culinary experience and one grandfather’s recipe have prepared Mark and Anna Johnson to launch their sourdough business in Blaine.

Anna’s @BreadinBlaine is an Instagram bakery that officially launched on November 1, after the couple’s European-style bread grew in demand from friends and family. The at-home bakery offers one original sourdough and 10 flavors that range from lemon poppy seed to toasted sesame for $5 per loaf.

“For me, it’s all about the texture of the inside of the bread that’s elastic and chewy,” Mark said. “You won’t find that at a grocery store.”

Mark uses his grandfather’s sourdough recipe that takes three days to make and requires no kneading. He uses his grandfather’s 25-year-old yeast that he worked every day for three months to revive. The natural yeast makes the bread easier to digest, especially for people with gluten intolerance, because the sourdough eats at the gluten while it’s fermenting.

“The process is what gives the bread its unique and distinctive flavor,” Mark said.

The bread business, which Mark and Anna hope to expand into a downtown Blaine storefront by the end of the year, came into fruition unexpectedly after the couple and their two children, 5 and 7, moved to Blaine from Southern California.

Anna grew up in Blaine, even starting her career in the restaurant industry with her first job catering at the Semiahmoo Resort, before moving to California for college. This is where she met Mark in the late ’90s, who went on to attend the Le Cordon Bleu College of Culinary Arts in San Francisco and train under Michelin-rated chef Gary Danko. Mark then started his career as an executive chef for Léal Vineyards, a catering company with seven properties across Southern California. During this time, he worked 16 to 18 hours a day, six days per week with two young children at home.

It was when Léal Vineyards decided to move forward on a new $25 million project that the chef, who was once asked to be on the TV shows Chopped and Top Chef but declined because the timing wasn’t right, decided to separate from the company and prioritize family. It paid off, and this past Easter was the first Mark was able to spend with his kids.

“With us moving up here, we didn’t know what we were going to do,” Anna said. “Within three months we decided to quit the job, move up here and then we’d decide what we’re going to do after that.”

The couple knew they eventually wanted to open a restaurant in Blaine, but sourdough bread was one of the last things they expected. Requests soon came in, though, and now the couple sells out at about 20 loaves per day – usually pre-sold before the day of delivery.

“We’re in the infancy of this step of our business,” Anna said. “It’s building a clientele and introducing Mark to the community, but it’s also the starting point of hopefully many food businesses in town as the kids get older.”

The goal is for a brick-and-mortar store to be established by the end of the year, where the couple can expand on their creative flavors and more easily navigate constraints that arise from working out of their home kitchen. Without the restrictions of making deliveries and their current food permit, which only allows for 11 flavors of bread, Anna’s @BreadinBlaine will be able to sell a greater variety and amount of bread.

Eventually, Mark and Anna would like the bakery to serve healthy grab-and-go food like soups and salads for people who don’t have time to prepare dinner. They will continue to sell their $5 classic sourdough but will expand their offerings of flavored breads.

Anna said she’ll miss the days baking at home with the kids when they move to a downtown location, but it’s the right step forward.

“One of the things that always sticks in my head is when people grab a loaf and it’s warm and they hug it and smell it,” Mark said. “It’s a satisfying feeling knowing how much people enjoy a loaf of bread, how simple it is.”

Anna posts the weekly menu on Instagram @BreadinBlaine. For orders, text Anna at 360/296-2538. On request, Anna will text her weekly menu to people without Instagram. Text is the preferred communication. For people who don’t want delivery, Anna offers a scheduled 30-minute pick up window.