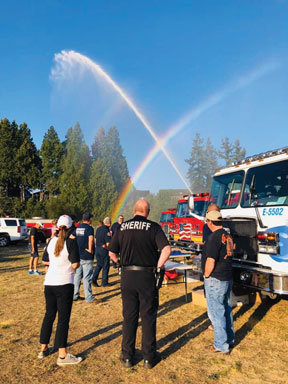 National Night Out will offer community members a chance to meet the law enforcement officers and first responders who serve them. The event will be held 5-8 p.m. on Tuesday, August 2 near the BP Heron Center in Birch Bay State Park after two years of being held as a parade during the
pandemic.

Birch Bay Chamber of Commerce and Whatcom County Sheriff’s Office (WCSO) will host the event with WCSO, North Whatcom Fire and Rescue and Phillips 66 in attendance. Families may take photos with law enforcement and first responder vehicles. Free hot dogs, cotton candy and popcorn will be available to the first 100-125 people at the event, said Danielle Gaughen, Birch Bay chamber executive director. Free goody bags will be available to the first 100 kids.

While there won’t be an official parade route, Gaughen said the emergency vehicles may leave the park with lights and sirens on.

“National Night Out enhances the relationship between neighbors and law enforcement while bringing back a true sense of community,” the National Night Out website reads. “It provides a great opportunity to bring police and neighbors together under positive circumstances.”

Over 16,000 communities in the U.S. celebrate the national event, according to the National Night Out website. This year will be the 38th annual event.

“Come out and celebrate National Night Out,” Gaughen said. “It’ll be fun.”