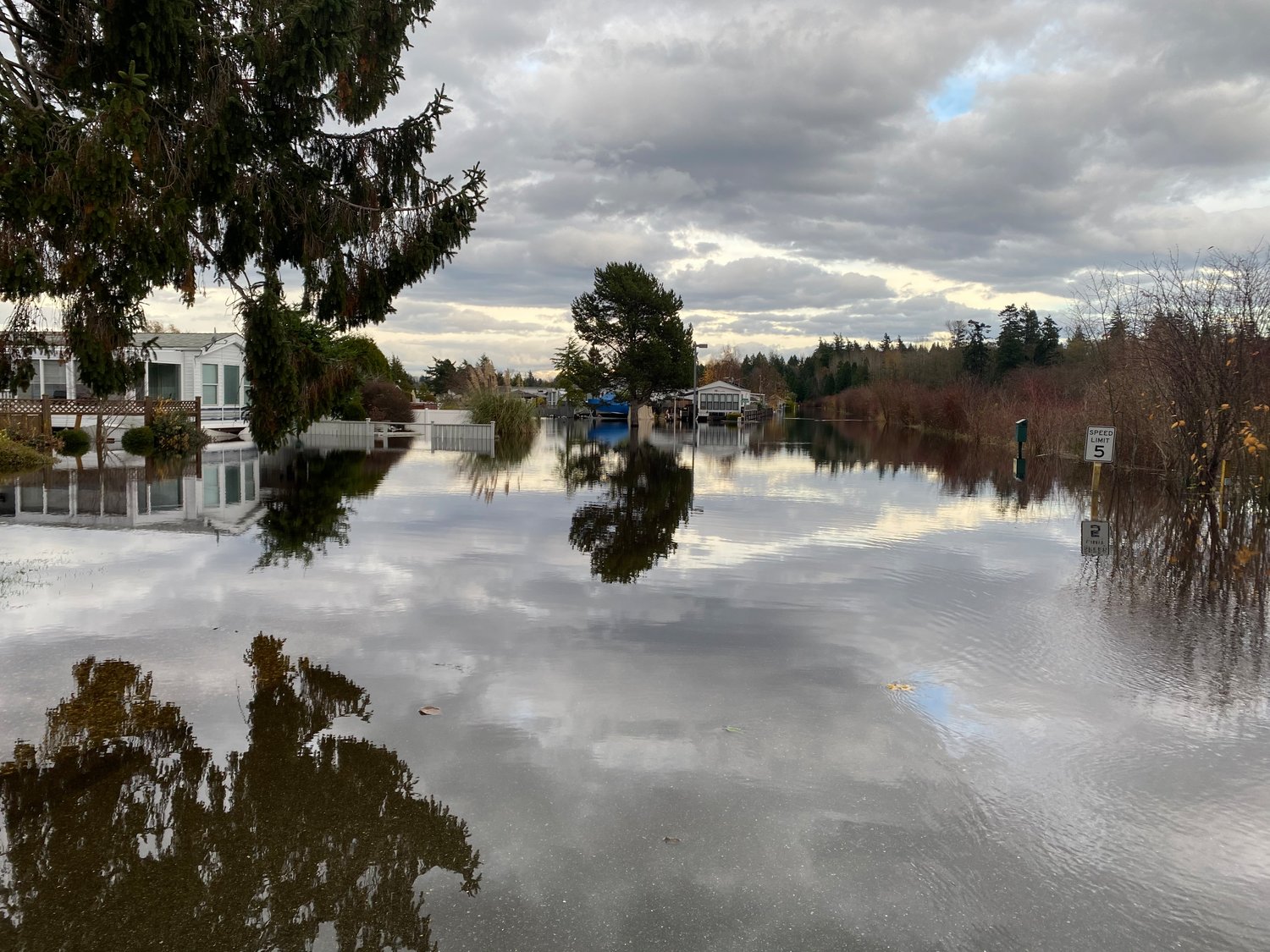 Heavy rain continued to fall through the Thanksgiving weekend in Whatcom County with even more on the way.

Birch Bay Leisure Park began flooding again the morning of November 28 after the 718-unit park flooded in the first flood during the November 14-17 storm system. Park manager Lisa Fisher said on Monday, November 29 that flooding had reached about 2.5 feet in low-lying levels of the park.

Before the most recent flooding, Fisher said the park was looking at $500,000 in damage to park building and infrastructure, not including individual damage to the vacation homes, which she said residents are estimating to be $5,000 to $10,000 per home. “It’s going to be a lot,” she said.

The main lift system that pumps water into the wastewater treatment plant stopped functioning after water fried it, Fisher said. Without a working sewer system and a supply chain delay for the needed part, Fisher said it could be a month until park residents are able to move back into their vacation homes.

The park flooded up to 4.5 feet earlier this month because of broken tide gates and wetlands on both sides of the park that overflowed with water, Fisher said. Whatcom County has been working on fixing the tide gates and replacing culverts with an open ditch system for at least two years, Fisher said.

“Anything having to do with state or county government is extremely slow, which is frustrating. We’re looking unfortunately probably two years out in the permitting process, maybe longer,” Fisher said, adding the county was doing the best it could. “When we get that done, there will still be some flooding but it should never be like this.”

With about 90 percent of park residents being Canadian, Fisher said many were waiting until November 30 to assess the damage to their properties, when the Canadian government was set to drop the Covid-19 test requirement for trips into the U.S. under 72 hours. “Not being able to get down here is bad because it means more time for the mold to grow,” Fisher said.

In the meantime, park maintenance lead Mario Miranda has been escorting people to their homes and taking photos of damage for those who don’t have proper PPE to wade through

“It’s been a lot of de-clogging and planning for the future, but it’s been hard to plan for the future due to the weather,” said Miranda, who went door-to-door evacuating people in his work truck November 15.

Fisher said older residents will likely need volunteer help to look at the insulation under their homes when the water recedes.

Bernie Ziemianek, director of the city of Blaine public works department, said public works briefly closed part of Pipeline Road by Yew Avenue on November 27 but no other roads closed. Yew Avenue between Pipeline Road and Hughes Avenue will remain closed until the city hires a consulting engineer to fix where the side of the road eroded, Ziemianek said. “We can’t allow the chance of someone driving too close to the edge,” he said.

Heavy rainfall also caused more waste discharge outside of the Lighthouse Point Water Reclamation Facility around 11 a.m. November 27. An effluent pipe, outflowing treated wastewater to Drayton Harbor, broke in Semiahmoo November 28. Public works crews worked all day to vacuum the water and create a temporary repair, Ziemianek said, but a full repair probably can’t happen until spring when the city is able to shut down the wastewater treatment plant for a few hours.

“This heavy rain has touched about every drain and manhole. It’s all over the place so it’s keeping us busy,” Ziemianek said. “We’re doing our best to ensure the storm drains are open and cleared.”

Blaine school district delayed school for two hours Monday, November 29 because of heavy rainfall. Birch Bay Water and Sewer District recorded 4.4 inches of precipitation between November 22-28, with nearly half of that rainfall recorded November 27 and 28.

Feed supply for dairy cows in Whatcom County is transitioning to normal operations after a large Sumas feed plant was flooded, causing a disrupted supply chain and an emergency for dairy farmers needing to feed their cattle.

Sumas’ EPL Feed, which provides 60 percent of grain to Whatcom County farmers, was flooded in the November 14-17 storm system, knocking out electrical units and damaging grain. But EPL Feed is back to full operations as of earlier this week, which is weeks earlier than anticipated, said Fred Likkel, executive director of Whatcom Family Farmers.

A Ferndale feed producer and eastern Washington farmers helped while the Sumas feed mill was down, he said.

BNSF Railway train tracks used to transport the feed were restored around November 24 after being damaged during the first flood, Likkel said. BNSF Railway has been able to get product that was waiting in Everett while the tracks were broken up to Sumas, he said.

“It was pretty nerve-wracking in the beginning but we were able to get through it with minimal damages,” Likkel said.

Farmers are now carefully watching cattle to observe what sort of stress the flooding may have caused, like standing in water for several days, which can make them more susceptible to diseases. Crop damage will become more evident later, Likkel said, adding that raspberry and blueberry fields don’t do well in standing water.

Farmworkers are facing these challenges requiring them to work overtime to keep farms going all while many have had their homes destroyed during the floods, Likkel said.

“Our farmers are a resilient group and they’ve had a really ‘pick each other up’ attitude,” he said. “I’m really proud of them.”