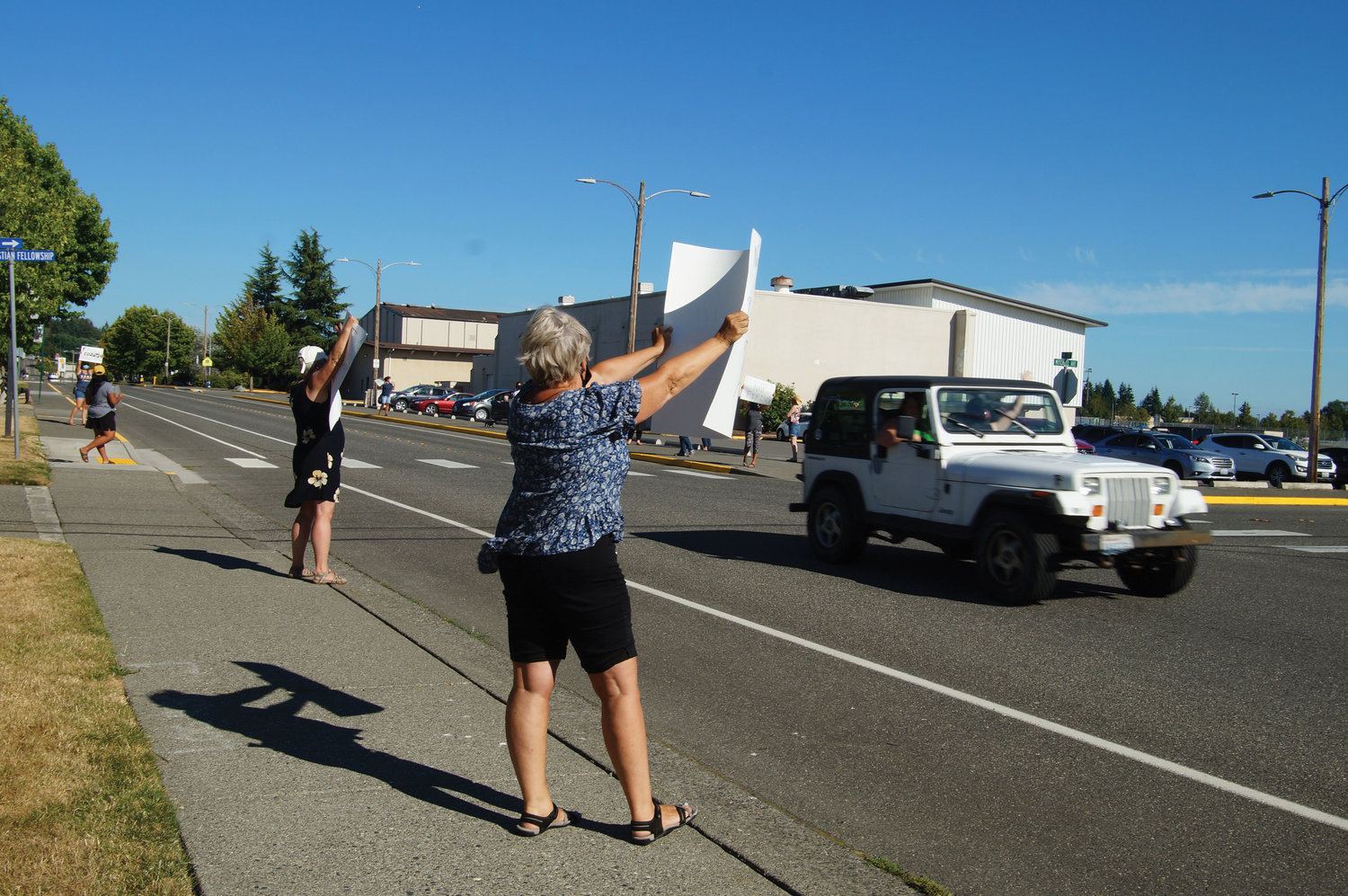 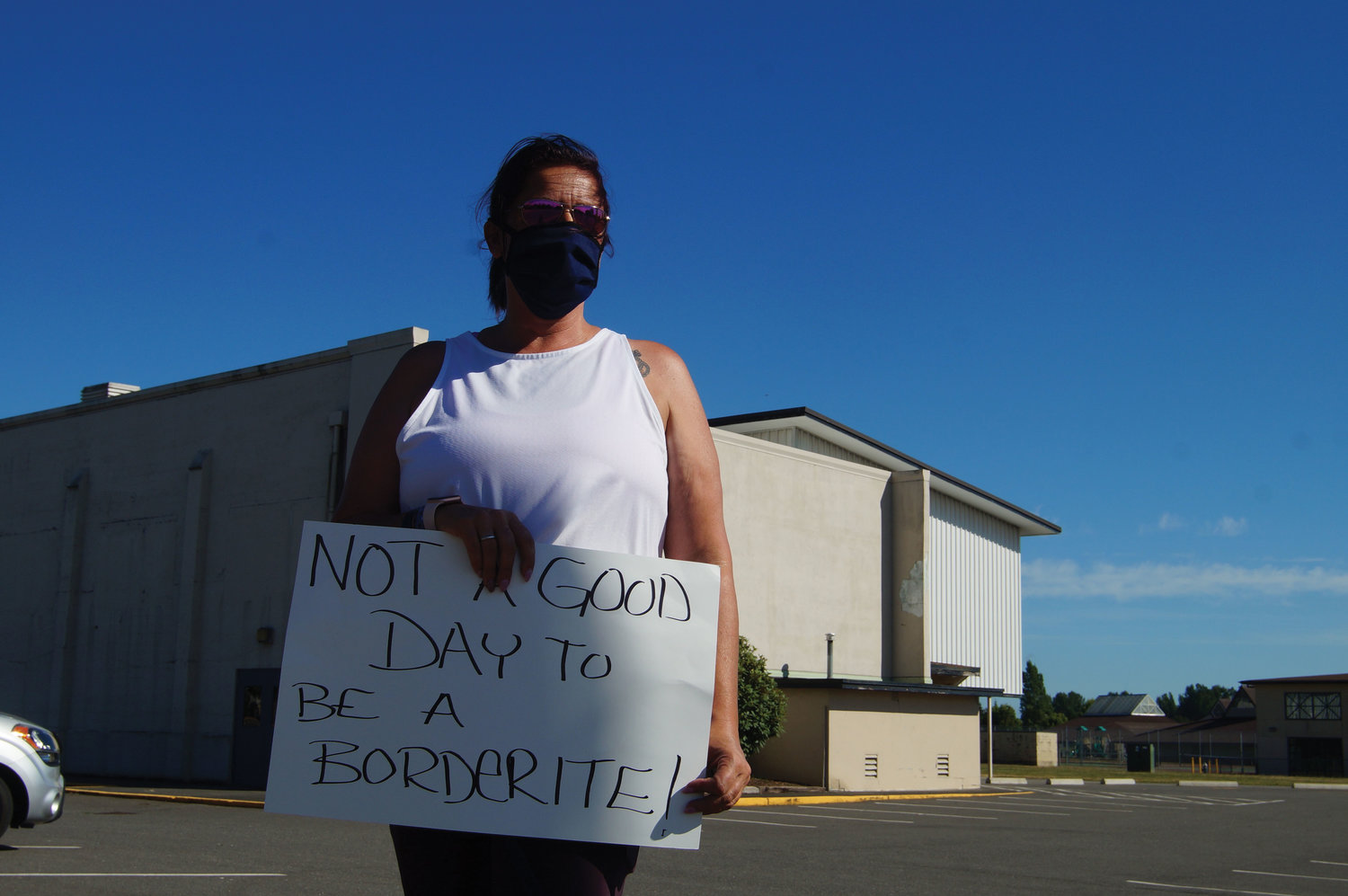 Honking cars filled the streets in front of the Blaine school district office later in the day as nearly 20 district employees rallied for community support.

“We just want to be heard. We matter too,” said Kim Ingham, a bus driver and food service worker who was starting her 29th year with the district, during the rally. “We’re not asking to save our jobs. That’s not even going to be possible, but save our medical.”

Blaine will lay off all bus drivers and reduce bus mechanic staffing from 10 to four hours per day, according to the letter sent to union members. All nutrition service positions will be cut with the exception of four cooks. Associate positions that won’t support students during remote learning will be eliminated, according to the letter. Union officials say the number of paraeducators to be cut is unclear.

In addition, the district tried to reduce all office staffmembers’ hours by one hour per day and reduce all maintenance, grounds and custodial staff by two hours per day but both amendments weren’t allowed by the union’s contract with the school district, which will expire August 2021. Any reductions in these positions will affect employees with the lowest seniority, the letter states.

In the letter, the union says it argued to the district that the budget cuts were too big and tried to bargain for furloughs instead of layoffs, which will result in immediate loss of employee health insurance.

The school district and union officials could not give the exact number of jobs affected by press time.

The Office of Superintendent of Public Instruction sent an August 13 letter to superintendents informing them school districts will get transportation funding from September to January, but starting in February 2021 that funding will be “substantially lower,” for districts with schools in remote learning, since it’s based in part on previous ridership numbers.

Blaine school district superintendent Christopher Granger said in an email to The Northern Light that the district began conversations with the union immediately after realizing layoffs were likely. He said he thought the district was still negotiating with Service Employees International Union Local 925 (SEIU Local 925), the union that represents Blaine school district service employees.

Granger said he was disappointed to see the statement released before the district finalized decisions regarding the layoffs, but understood the union’s position. The district is working to determine the most fiscally responsible, yet least impactful solutions, he said.

“These are incredibly difficult times, with many difficult decisions ahead; for the district, for our staff and for our families,” Granger said. “We regret being in this position and its impact on the staff we care for and appreciate. We will continue to come to the table together to work towards a solution.”

With 25 hours of notice, the Blaine school district announced an August 19 special board of directors meeting would convene in executive session, closed to the public, to consider the position of the district in collective bargaining. No action from the board is anticipated at the meeting.

Blaine union officials said in the letter to members they closed discussions with the district so members could be notified as soon as possible that they were going to lose healthcare benefits.

Two-thirds of the service employee union’s approximate 150 members will lose their jobs, said Sue Schroeder, Blaine chapter vice president of SEIU Local 925. Sue Schroeder said the union had good communication with the district until this point and is grateful to have a supportive board of directors.

Russell Carleton, Blaine chapter president of SEIU Local 925 and a custodian for the district, said it was clear to him following three meetings with the school district last week that the district had made up its mind on the
layoffs.

Carleton said he’s never seen staff cuts this severe in his 27 years working in Blaine schools, but the district is not entirely to blame.

“The state needs to step up to the plate. They’re the ones who have the money,” Carleton said. “It’s nobody’s fault. It’s the pandemic and everyone gets that but it’s super impacted lives. When you lose your income and medical, that’s just tough.”

In an August 17 letter shared with The Northern Light and sent to governor Jay Inslee and the Washington Office of Superintendent of Public Instruction, state education unions asked the governor to use emergency powers to suspend the state’s formula to calculate school districts’ student transportation and provide sufficient transportation funding for the 2020-21 school year.

The letter called on state superintendent Chris Reykdal to use his emergency powers to adjust allocated funds for student transportation and require school bus drivers continue to be employed and paid.

OSPI spokesperson Katy Payne said the state superintendent doesn’t have emergency powers but the governor’s office and state legislature are aware of the issue and are working to find a solution. The governor’s office is researching if it can use emergency powers to create a fix to student transportation allocations, which would be a quicker solution than the legislature adjusting the allocations in January, Payne said.

“The Governor and State Superintendent of Public Instruction have a constitutional obligation to modify the funding formulas using the process provided in statute to define additional differential and significant factors to allow for the safe transport of basic education materials and students during the COVID-19 pandemic and a funding formula that provides for the actual costs of these basic education transportation services,” the letter reads.

The letter is signed by six unions including SEIU Local 925 and the Washington Education Association, the state’s teachers union.

State union vice president Tricia Schroeder said it’s difficult to give a number of school districts that have laid off classified employees rather than furloughing them because many districts initially laid off their employees before reversing the decision and furloughing them, largely to preserve medical benefits.

Tricia Schroeder warns the state will be in crisis when the schools reopen for in-person learning and former bus drivers have found new jobs, which will add to an already existing deficit for school transportation employees. Blaine union members and representatives echoed these remarks, including Blaine union vice president Sue Schroeder (unrelated to Tricia Schroeder), who said she’s already heard of bus drivers looking for employment at private schools.

Tricia Schroeder said the union’s members will increase their presence at school board meetings and lobby when state legislature returns to session in January. Until then, the union has started unemployment webinars for members filing for unemployment.

Tifany Coleman, a Blaine bus driver of five years, said she feels abandoned by the district after bus drivers delivered meals to students in March while the rest of the school district worked from home.

“When this all started with the pandemic, we were told we were supposed to rally the community together,” she said. “We were the ones on the front lines to help kids feel some sense of normalcy and community.”

Coleman said she wanted the rally in front of the district’s office to put faces to the budget cut numbers and show who would lose health insurance. Many protesters say they want to demonstrate until their voices are heard.

Coleman said she fears for her colleagues, many of whom she says have worked for the district for decades and now, over the age of 50, will be left without health insurance in less than two weeks.

Even though Coleman said she understood the district’s need to furlough drivers while students study at home, she said she expected more from the administration.

“We’re not getting the support we earned,” she said. “I don’t understand them leaving us in the middle of the water without life jackets.”