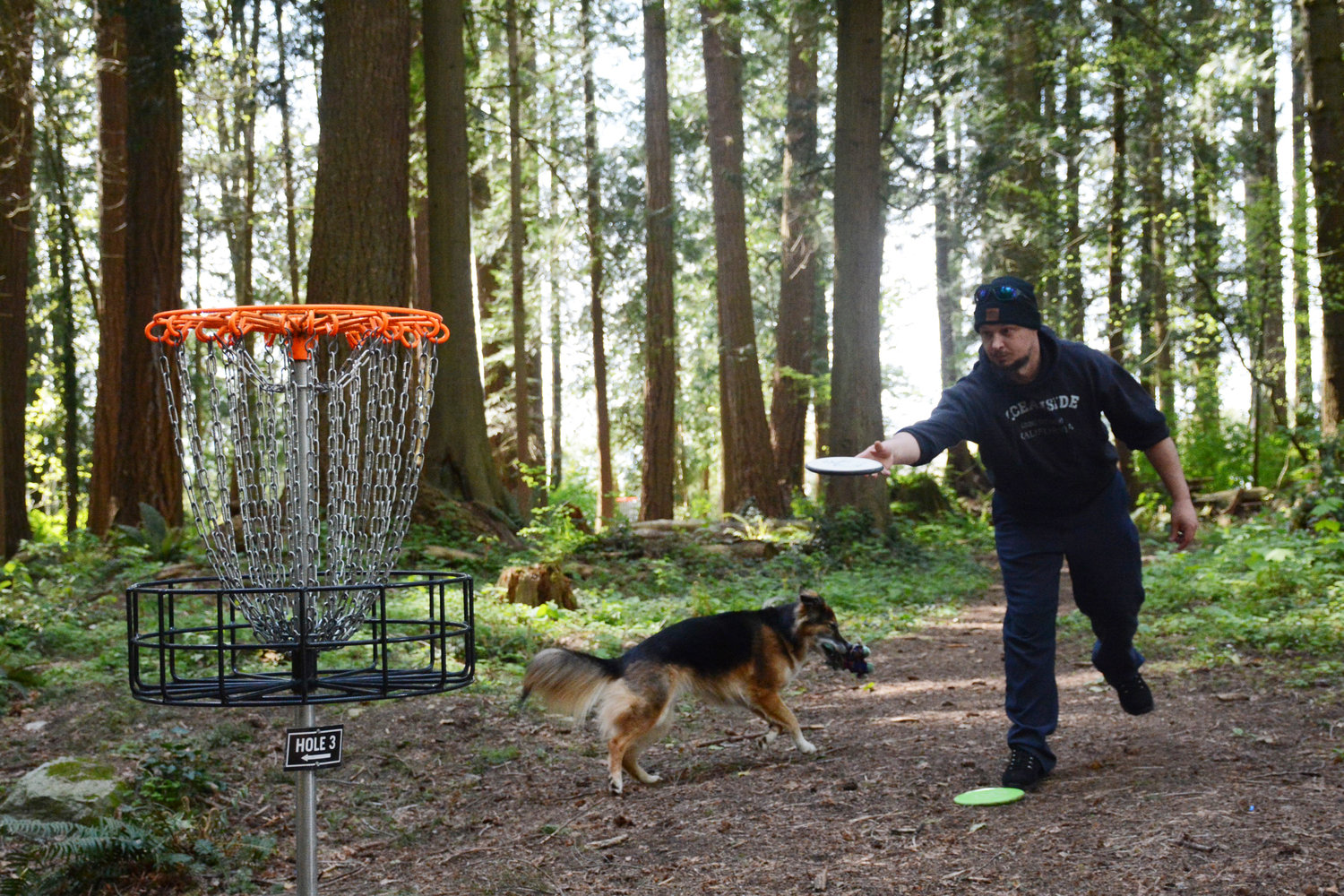 Mike Williams makes a shot on hole three of Lincoln Park’s disc golf course April 29. He said he plays about four times a week with his dog, Frankie.
Photo by Ian Haupt
Posted Wednesday, May 4, 2022 4:14 pm
By Ian Haupt

Now that it’s May, with hopefully warmer weather around the corner, it’s a great time to get out to local parks. Walking in the woods has shown to benefit physical and mental health. To spice things up, Blaine’s Lincoln Park offers the added excitement of a challenge: Disc golf.

In the game, disc golf players count strokes each time a disc is thrown. Starting from the tee pad, players take turns until they finish the hole by throwing the disc in the basket. The player with the least throws at the end of the game wins.

The average disc golfer walks nearly three miles per 18-hole round, or 5,613 steps, according to a Western Carolina University study. The study clipped pedometers on 228 men and 112 women who played 15 different disc golf courses. It also found each additional throw resulted in just over three additional steps per hole. So when friends are beating you, just tell them it’s doctor’s orders.

The sport offers a light, full body workout, which has been proven to improve weight loss and heart health. It also has been shown to have mental health benefits.

Getting players closer to nature, disc golf relieves stress. Many players say how the physical activity along with the time spent outside reduces stress and increases serotonin levels, which in turn boosts mood and improves sleep. It’s a great way to socialize, too. Disc golf is relatively simple to learn so newcomers are always welcome, making it a great activity to introduce to friends and family. The community is also growing rapidly so there are likely people to play with at the local course. But it’s a sport that can just as easily be enjoyed alone.

Blaine resident Mike Williams said he started playing five years ago because it was a fun way to stay healthy. “That’s why we do it,” he said.

Williams said he’s played all the courses in Whatcom County and described Blaine’s as technical. Lincoln Park’s dense forest of Western red cedars, Douglas fir and Bigleaf maples make it challenging, but attractive. With two pin positions per hole, hole maps at each tee and a park in the middle of a nice neighborhood, he said the city of Blaine did a nice job.

The city completed the course in summer of 2018 after the park and cemetery board budgeted $25,000 for it earlier in the year.

Community planner Alex Wenger said the course offered a new amenity that is in short supply in Blaine. He said Blaine has plenty of green space and walking paths, but not many specified recreation areas like basketball courts and baseball fields.

The course does not impede on the park’s walking trails. Lincoln Park is also one of two off-leash dog parks in Blaine.

Williams said he plays four times a week, and most often in Blaine. He recently started entering competitions held at the park on Mondays at 5 p.m. The spring league runs for seven consecutive weeks until May 23 and participants can earn points toward starting spots in Professional Disc Golf Association competitions.

Whatcom Disc Golf Club, which Wenger said is a great volunteer group that helped in building and managing the course, started the annual Battle at the Border tournament at Lincoln Park in 2018 that gets 70-100 participants. This year the event starts 8:30 a.m. Saturday, June 19.

“Hopefully, they buy lunch in town,” Wenger said. “Who knows if those people would visit for any other reason besides the tournament.”

The club also manages and hosts events at three other courses in Whatcom County, at Cornwall Park in Bellingham, Mossy Roc in Sudden Valley and Vanderyacht in Ferndale.

The sport is inexpensive for beginners. Disc starter packs range from $20-$50, and single discs can cost under $10. Disc types consist of putters, mid-range and drivers, with variations to each.