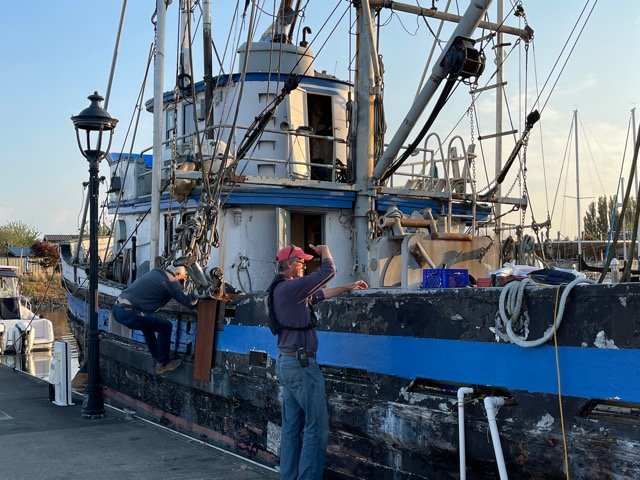 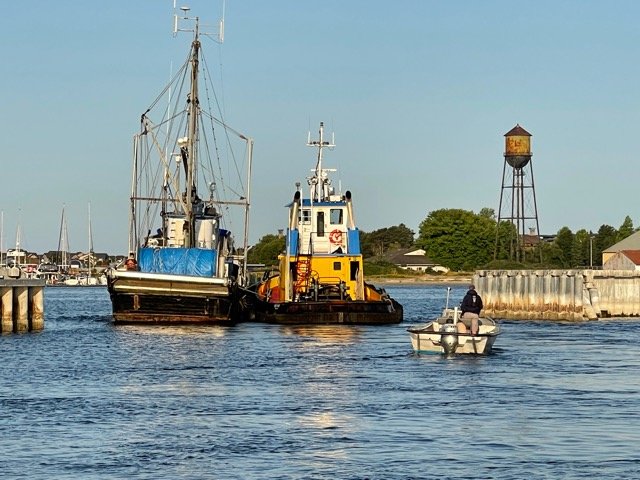 The Bligh Island being towed from Blaine Harbor on July 13.
Photo by Richard Sturgill
Previous Next
Posted Wednesday, July 21, 2021 4:57 pm
By Grace McCarthy

A derelict 1930s fishing vessel sank off Point Whitehorn July 13 while being towed from Blaine Harbor to Bellingham.

The Bligh Island, a 79-foot wooden hull purse seiner, had been in the Port of Bellingham’s custody since 2017. The port put the abandoned boat up for auction, but there were no bidders, port public affairs administrator Mike Hogan said.

The Department of Natural Resources (DNR) has a derelict vessel program, but it is underfunded because of the number of abandoned boats in the Puget Sound, Hogan said.

“DNR’s derelict vessel program is very important and we talk about the importance with our legislative delegation every year because unfortunately people will abandon boats,” Hogan said.

After going through the bidding process and looking into the DNR program, the port authorized money to move the vessel to Seaview North Boatyard in Bellingham, where it was going to be scrapped. Under custody of Seaview North, Western Towboat Company attempted to move the boat to Bellingham July 13.

The boat sank in about 160 feet of water off Point Whitehorn at the end of Birch Bay. To Hogan’s knowledge, the vessel is the first boat owned by the Port of Bellingham to sink.

The port was concerned about the boat sinking in Blaine Harbor, which is why they authorized funding to remove it from the harbor, Hogan said. Older wooden boats are more susceptible to degrading in saltwater than fiberglass, steel or aluminum boats, he said.

Although it varies, Hogan said the port will usually deal with one to two derelict boats per year.

“Unfortunately, we have this problem in our harbors. Boats show up and you’re concerned about their seaworthiness and have trouble tracking down their owners,” Hogan said.

Seaview North president and CEO Phil Reese said the boat sank within 10 minutes after the boat’s fishholds started to fill with water. The cause for the boat sinking is still undetermined, but Reese believes it’s due to failure of the boat’s wooden planks.

“It was scary. We’re really fortunate no one was hurt,” said Reese, who had three crew members aboard.

Everything in the boat had been cleaned before it was towed, Reese said.

The U.S. Coast Guard, Washington State Department of Ecology (DOE) and Washington Department of Fish and Wildlife (WDFW) responded to the sinking, Larry Altose, a DOE spokesperson, said in an email to The Northern Light. A WDFW officer confirmed there was an oil sheen on the surface, but the oil was not able to be recovered by cleanup pads. The U.S. Coast Guard flew a helicopter from Port Angeles over the area and reported the sheen extended 2 miles to the northwest of the boat, Altose said.

About 100-200 gallons of oil were estimated in the vessel, which can contain thousands of gallons. Altose said some fuel can remain in a tank that would otherwise be considered empty.

The U.S. Coast Guard and DOE determined recovering the vessel, which would cost hundreds of thousands of dollars, would not be worth the money.

Richard Sturgill was taking the Plover ferry out for its regular maintenance when he watched the Bligh Island leave Blaine Harbor. Despite it sinking, Sturgill said watching the longtime idled vessel was a sight to be seen.

“After sitting there forlornly at gate 3 at the fishermen’s dock, it was pretty cool to see it move,” Sturgill said. “It’s been a fixture at the dock.”