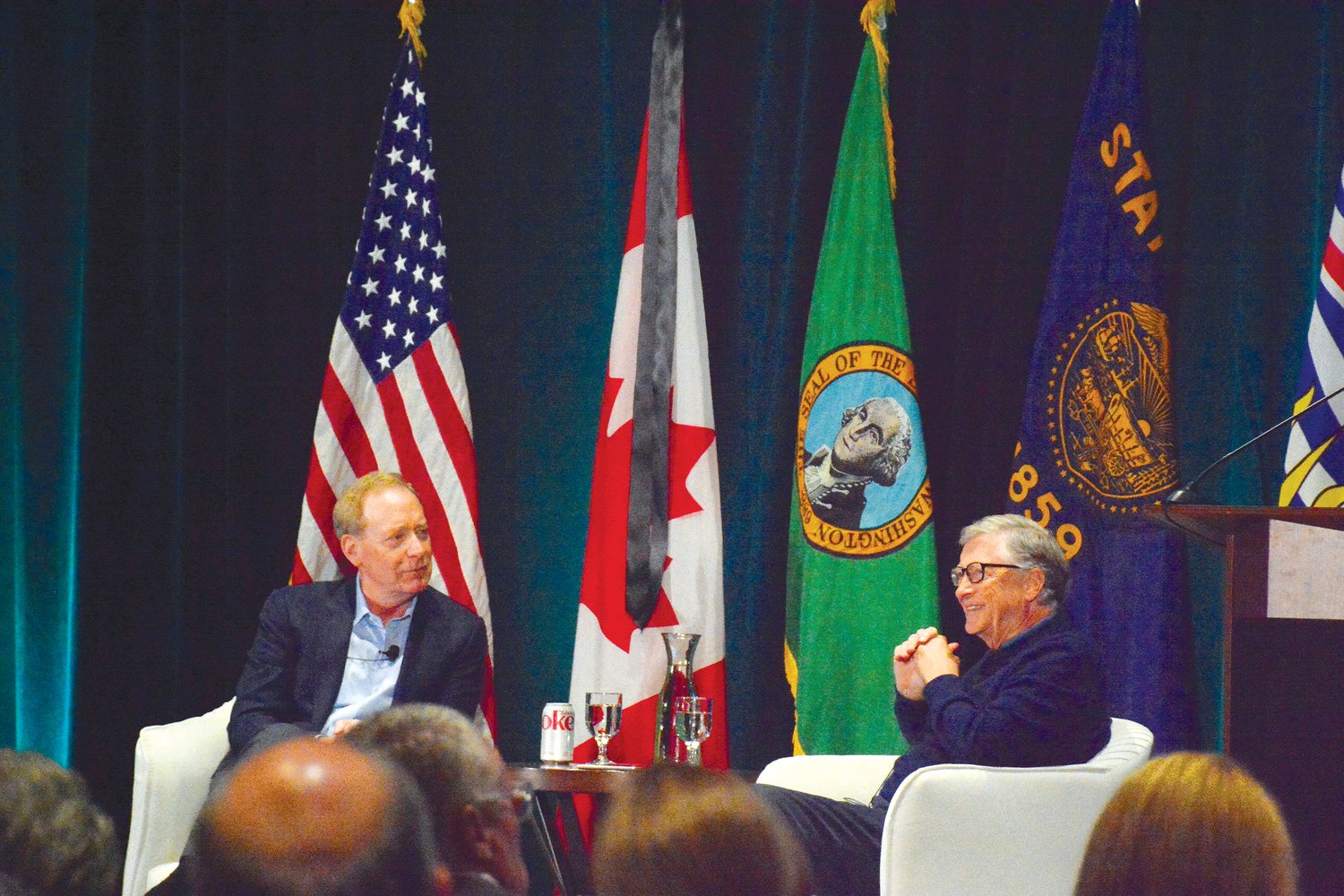 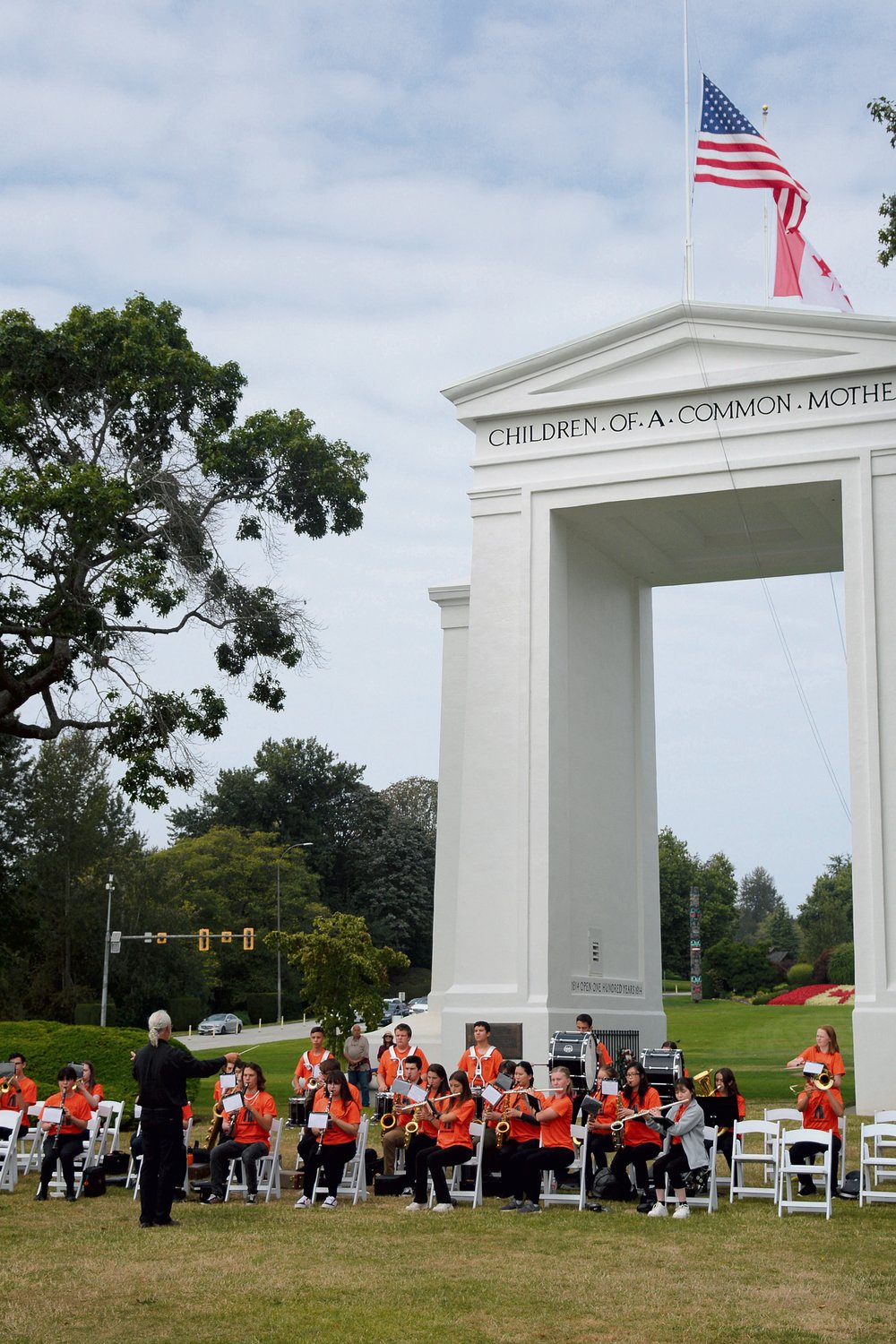 The Blaine High School wind ensemble performed the U.S. and Canadian national anthems under the Peace Arch on September 13.
Photo by Grace McCarthy 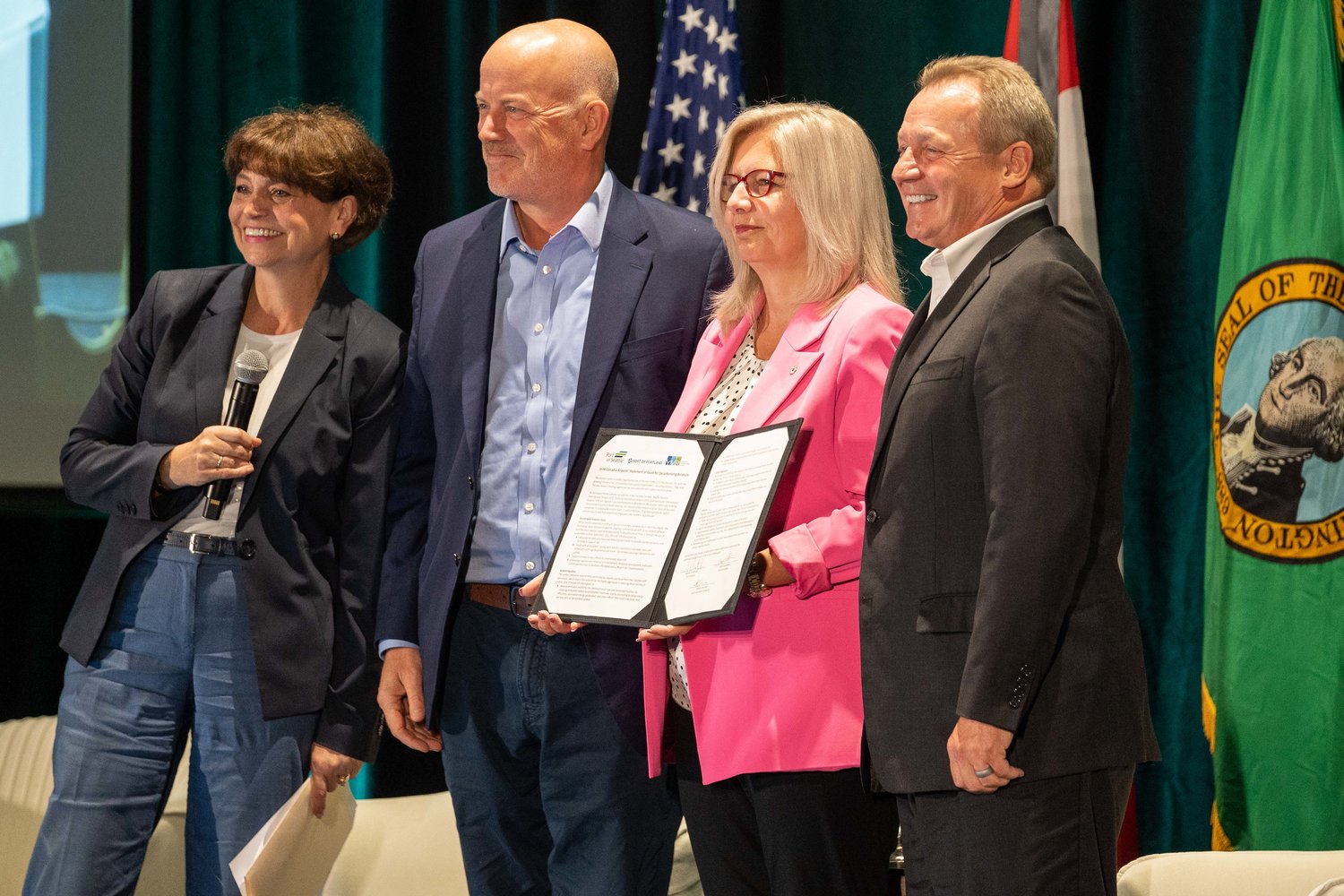 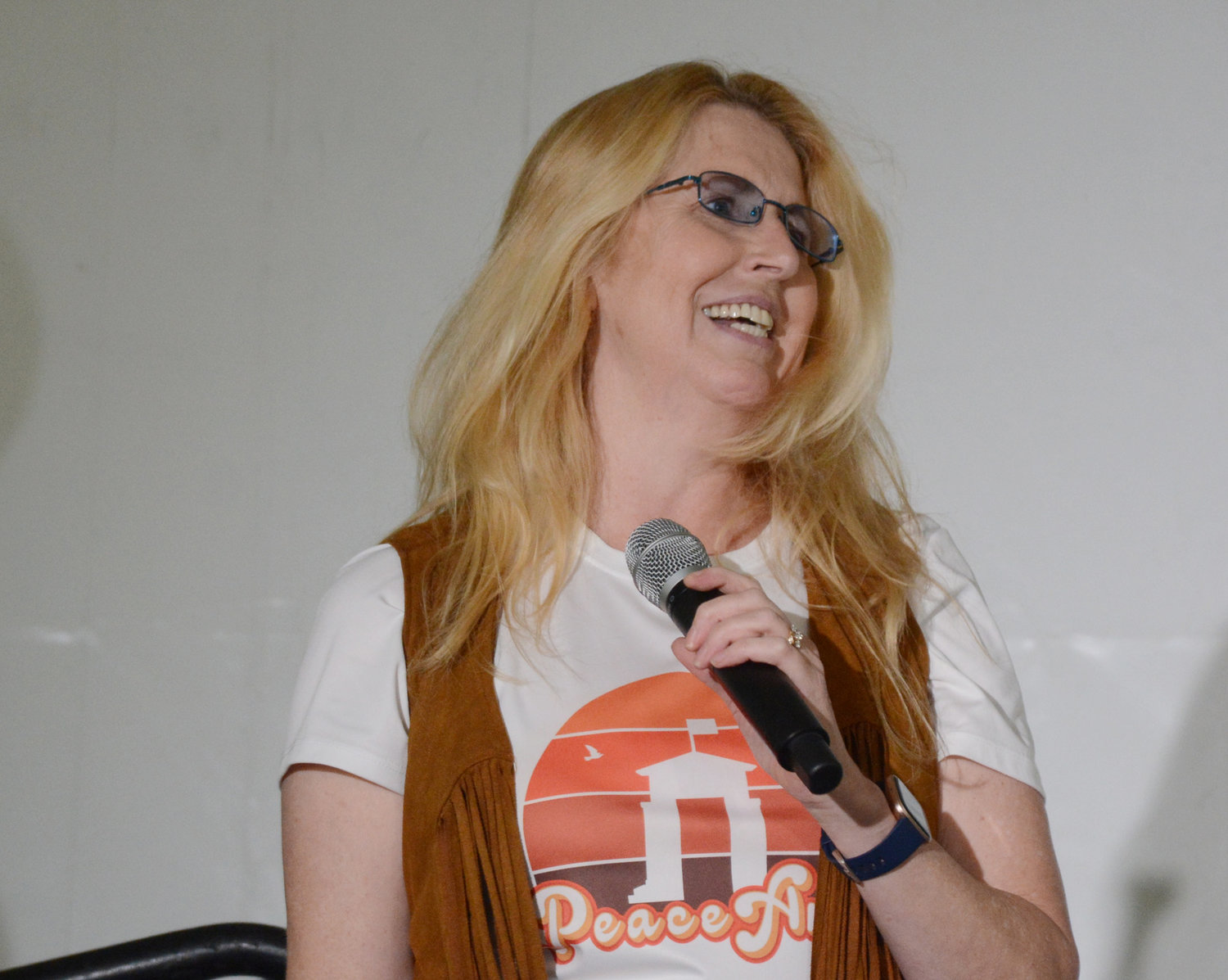 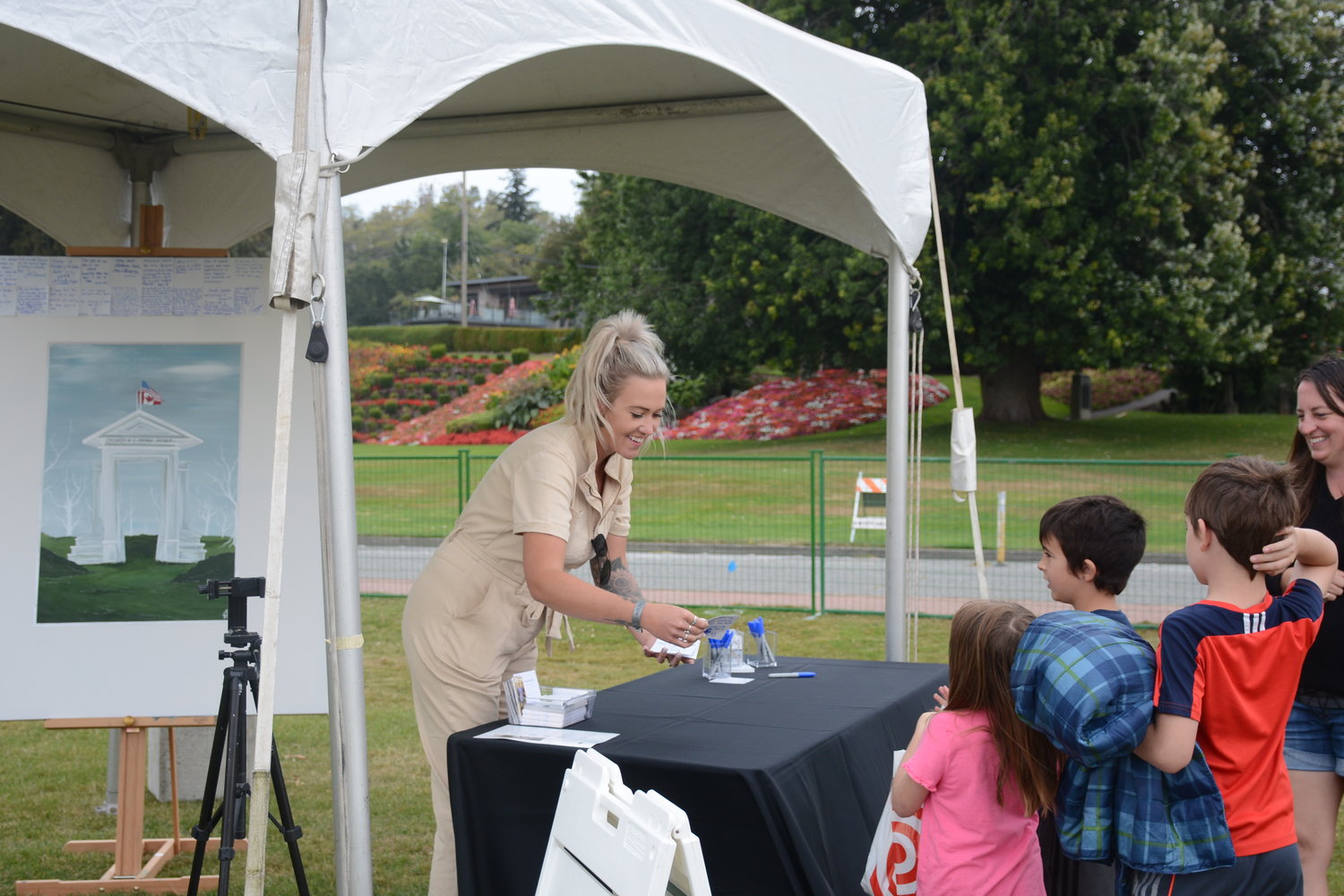 Artist Erin Oostra helps children at the Peace Arch community gathering create messages of hope for a mural she gifted to the Washington State Parks Department.
Photo by Grace McCarthy 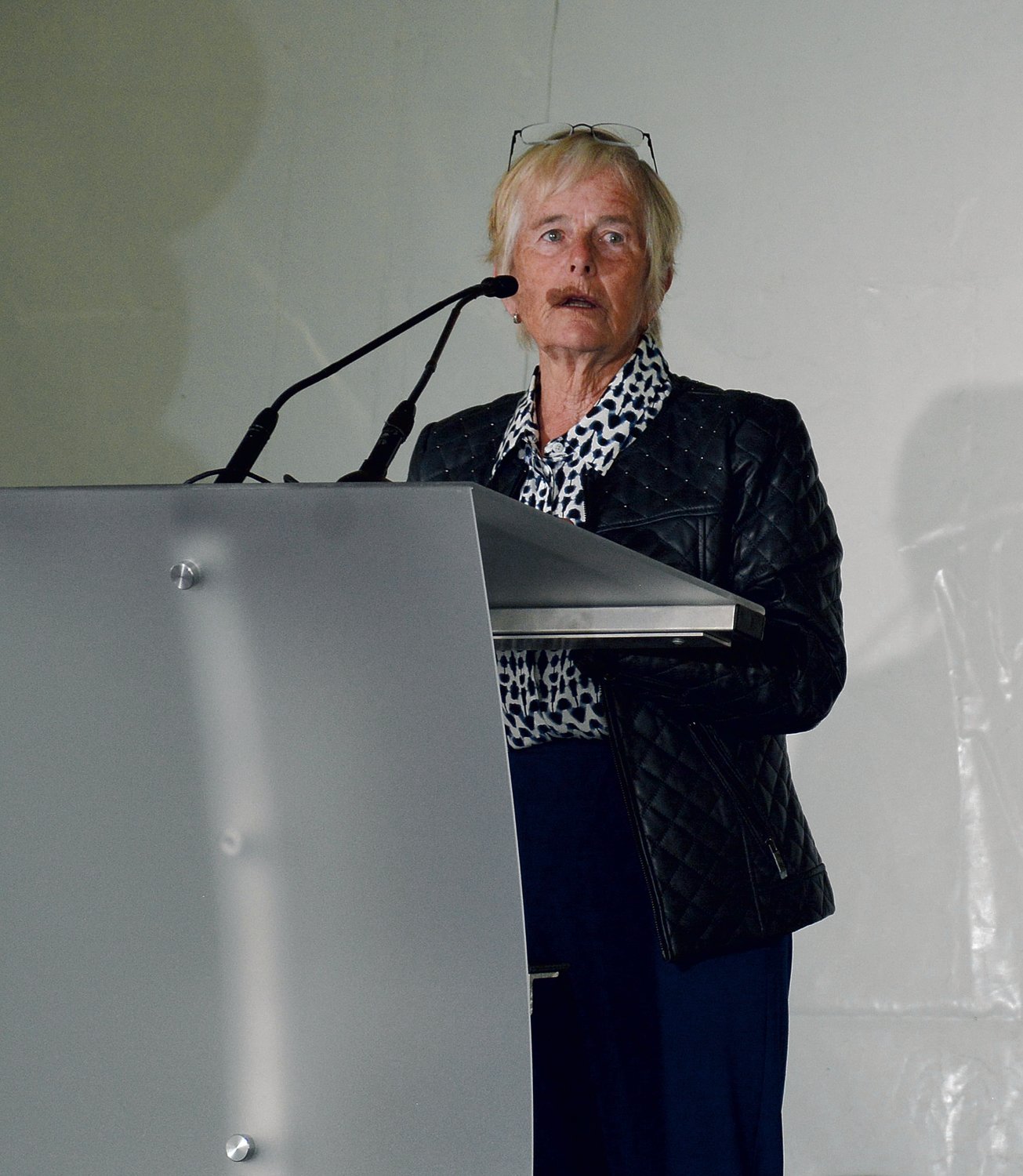 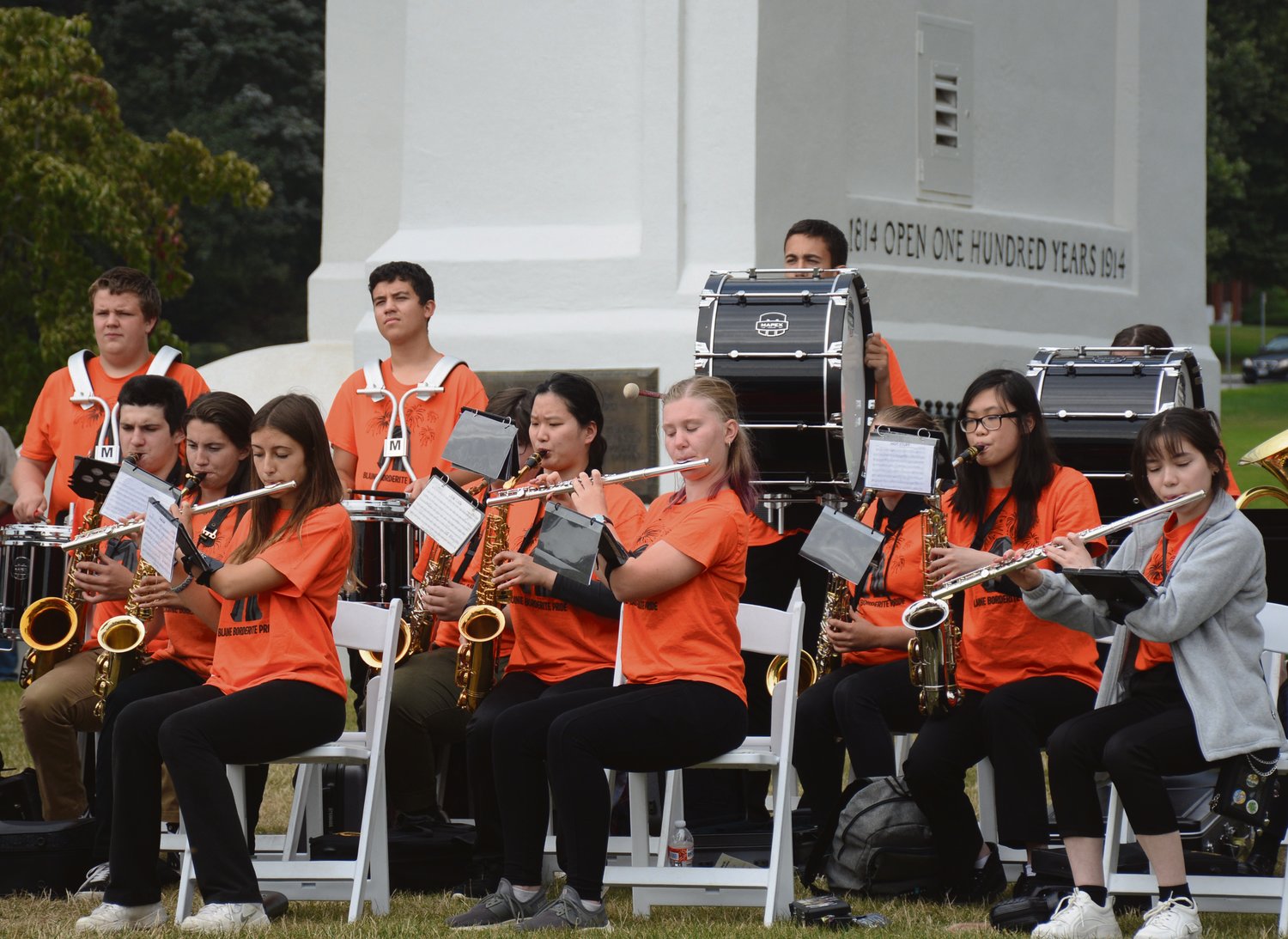 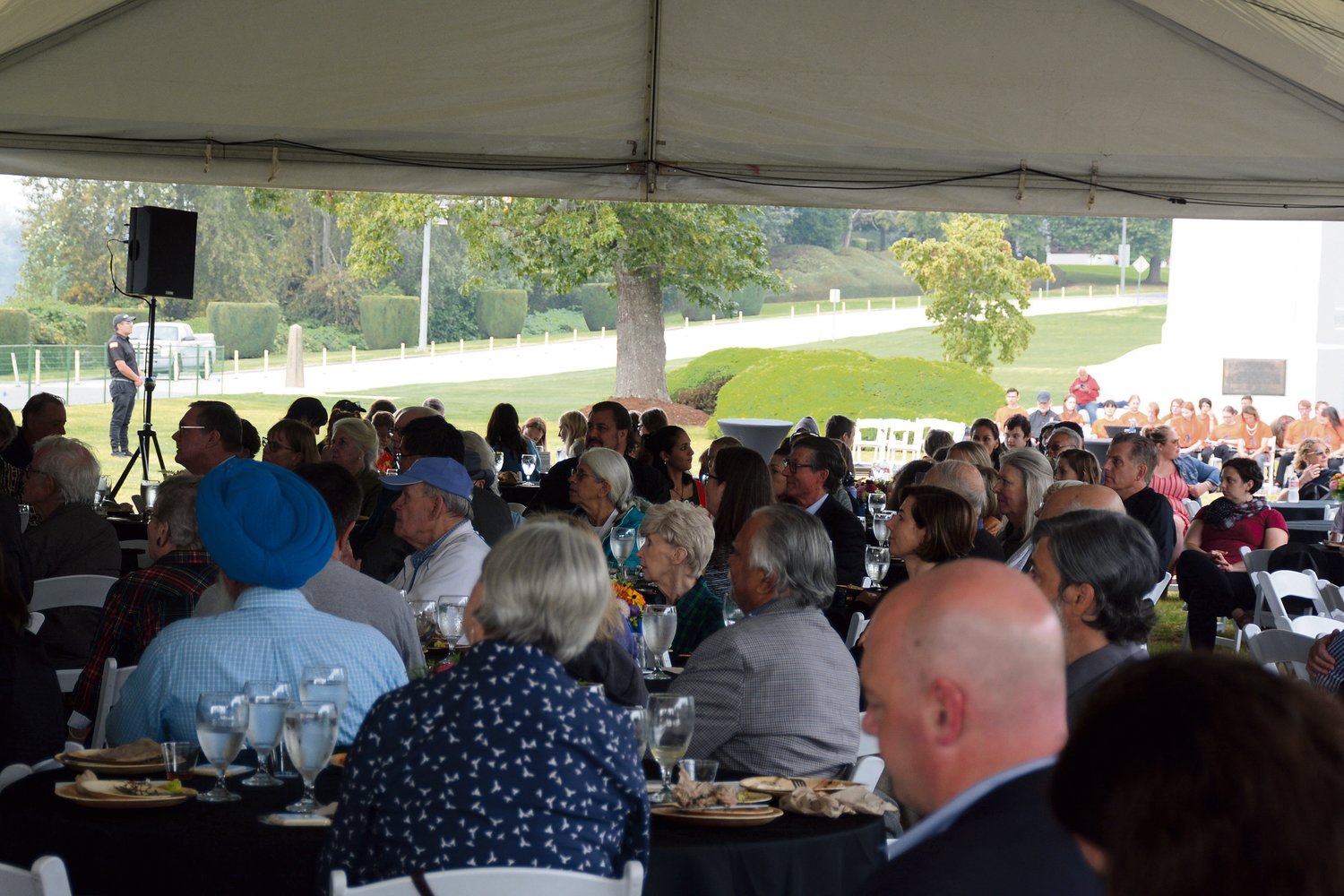 Dozens of community members and Cascadia Innovation Corridor conference guests listened to speakers at the Peace Arch community celebration. The event celebrated communities on both sides of the U.S./Canada border.
Photo by Grace McCarthy
Previous Next
Posted Wednesday, September 14, 2022 4:59 pm
By Grace McCarthy

The initiative’s sixth annual conference, “Cascadia 2050 Vision: Moving to climate action,” was the first held outside of Seattle or Vancouver, B.C. Organizers said the decision to host the sold-out conference in Blaine was to belatedly celebrate the Peace Arch’s centennial on September 6, 2021 that was delayed because of the pandemic.

Christine Gregoire, former Washington state governor who hosted the conference, said that the CIC initiative leaders decided in 2020 they wanted to become the first sustainable mega-region in the world.

“Realizing this vision also requires us to address the climate crisis literally head on,” Gregoire said in her opening remarks. “Taking action to reduce our greenhouse gas emissions while adapting to the effects of climate change.”

The CIC initiative is led by Business Council of B.C. and Challenge Seattle, a group of over 20 of the Seattle area’s largest CEOs, focused on strengthening ties from Portland, Oregon and Vancouver, B.C., according to its website.

Around a dozen Seattle demonstrators gathered outside of the resort as Microsoft co-founder Bill Gates arrived by helicopter before giving a keynote discussion with Microsoft president and vice chair Brad Smith.

Gates told conference attendees he was feeling optimistic about climate action because of the pace of innovation, but noted Russia’s war in Ukraine derailed some short-term goals.

“It needs to be a high priority for people. I have to say it does get immense attention,” Gates said of climate action. “I’m very impressed that, given the really bad effects are out in the future, every day we’re reading about, ‘Here’s where the weather is getting worse with floods and extreme heat conditions’ versus 10 years ago.”

Gates also discussed the U.S. Inflation Reduction Act recently passed and how it could scale up green steel production. He said the U.S. needs to be innovative in order to show other countries how to create climate solutions in an economic way.

The first day of the two-day event was tightly scheduled with conversations on climate change’s economic impacts, public-private partnership roles in climate action, regional airports’ climate action and the importance of ultra-high-speed transportation.

Leaders at the ports of Seattle and Portland, Vancouver Airport Authority and Alaska Airlines focused their conversation on sustainable aviation fuel (SAF) as an alternative to traditional jet fuel to lower carbon emissions.

“We are a fossil fuel driven energy at our core so energy along with labor is often at the top of the expense ledger,” said Tamara Vrooman, Vancouver Airport Authority president and CEO. “We exist as an airport for the benefit of our community and the economy that supports it, but we also think it’s a smart business decision. In Canada, there is a tax on carbon and the price of carbon-emitting fuels is going to go up.”

The airport authorities also shared goals such as the Port of Seattle wanting to be the greenest port in North America and Vancouver International Airport aiming to be net zero by 2030. The group signed a statement on joint goals for four climate action strategies at the conference: SAFs, airport facilities, airfield operations and vehicle trips to and from the airport.

A group of panelists encouraged conference attendees that the ultra-high-speed ground transportation was making headway. Washington state legislature invested $4 million in planning and $150 million as a state match for federal money. The group discussed the importance of regional transit as the population grows and the project’s ability to create jobs.

Smith said he hopes people 100 years from now will draw inspiration from photos of the 1921 Peace Arch dedication and the 2022 Peace Arch celebration.

“They will look at photographs of the Blaine High School band and say, ‘They were our inspiration.’ Because if we, like the people a century ago, can draw on our youth, focus on our future, we too can build a foundation and a legacy that will last and inspire and serve the people who come after us,” Smith said. “That is what today is about.”

International Peace Arch Association founder Christina Winkler closed the ceremony with a sing-along performance that had cross-border leaders waving their hands above their heads.

“It was really lovely that they brought everyone together and opened it up for anyone to come, have a nice meal and be a part of their unity celebration,” Winkler said. “It probably completed the conference for them, not to just talk about the Peace Arch but to actually be here.”

Letters to the Editor – February