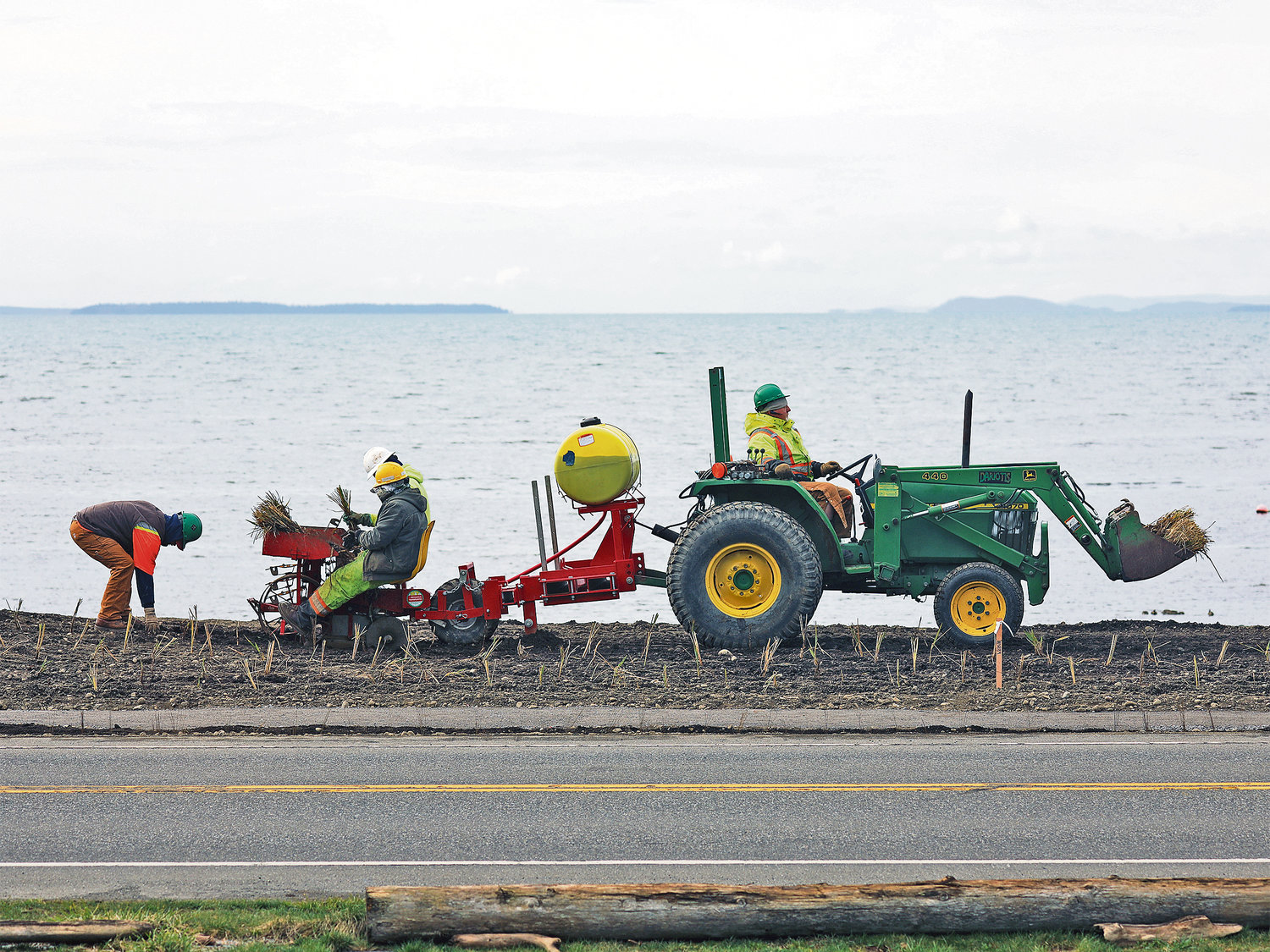 At a February 25 “Coffee with the Contractor” meeting, Granite Construction’s Gairrett Orelup said the Birch Bay berm project will be completed by early April.

Since the last meeting in early January, Granite Construction finished importing 205,000 tons of material for the berm, Orelup said.

Workers are now planting, finishing swale work, paving around the curbs and parking spaces, and extending  the pathway on the northern end of the berm.

Orelup anticipates that all landscaping and paving will be completed by March 14. “After that, all that is left is some finish striping, installing some curb stops along the parking stalls and then there’s just some miscellaneous cleanup around to get this project complete,” Orelup said. “Right now, we’re looking at a finish date of the beginning of April, end of March.”

The $8.7 million project, officially called the Birch Bay Drive and Pedestrian Facility Project, is designed to protect the area from storms and is in its second phase of construction. Granite Construction began construction in December 2019, taking a break for the summer of 2020.

The Birch Bay Chamber of Commerce hosts a monthly “Coffee with the Contractor” meeting for resident’s to ask the project’s contractor and manager questions. In the February 25 meeting via Zoom, Orelup and Whatcom County Public Works engineer Jim Karcher both gave brief progress reports and answered residents’ questions.

Below are some questions and answers from the meeting, edited for length and clarity.

Q: How do community members access the beach without trampling on the plants?

Orelup: At each concrete access that runs perpendicular to the road, there is a trail that is non-planted that people can walk from the street or from the limestone path and access the beach. It’s tough to see right now because those plants are so small. But we’re going to place driftwood at those areas to delineate the walkways. But I agree, it is tough to discern where the plantings start and stop because they are so small. If anyone has any better ideas to how we can delineate that path, I’m sure the county would love to hear.

Q: Will the plantings along the berm start to grow and turn green by summer?

Orelup: The hope is that they do start to grow and turn green. I am no expert when it comes to plants so I don’t know how much growth there will be between here and the summer. So, it’s hard for me to say.

Q: How are you going to prevent people from trampling the plants?

Karcher: I will give the audience the dilemma that the county is forced to face here. And that dilemma is – and I don’t mean to make this sound negative – it’s that when we got permission to construct the berm, it came with mitigation attached. That is planting in a large effort and cultural mitigation.

We don’t know how to deal with it to be honest with you. We are going to try to deal with it with signing. And remind the public to use the access areas. We have to show the permitting agencies that we are sincere and achieving our planting viability so that there’s not a lot of plant mortality, or losses, that we don’t comply with our permit regulations for what we have to put back. It’s going to have be like a dance, between the public … wait until the Fourth of July comes. We’re concerned about this, and we’re concerned about the cost of it. I think what we would like to do is, when we’re done with the formal construction, we start a series of outreach with the community about what we can do together as a group to maintain the viability of these plants so that we can get through the establishment period.

Q: How many different kinds of plants are being planted?