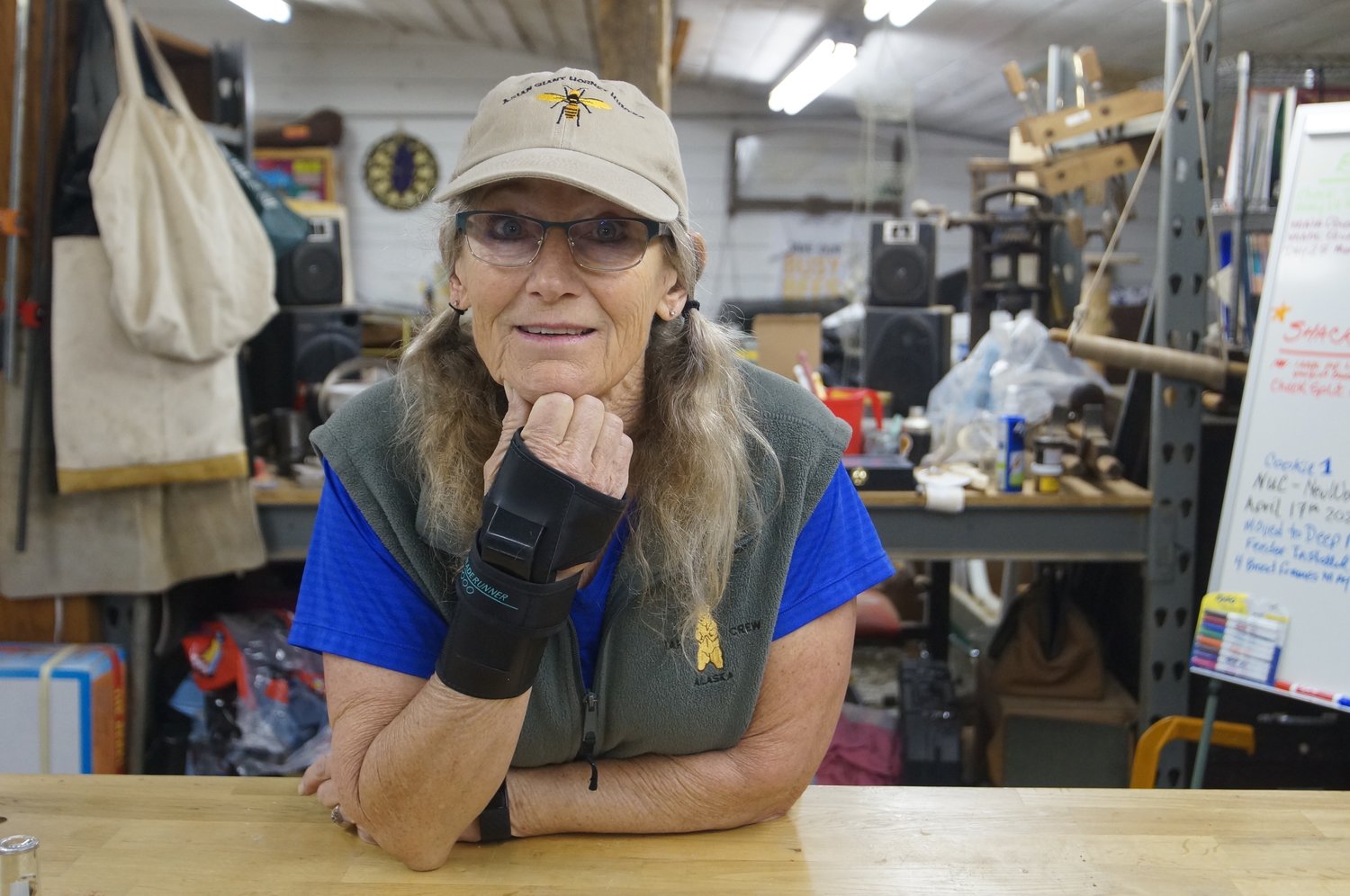 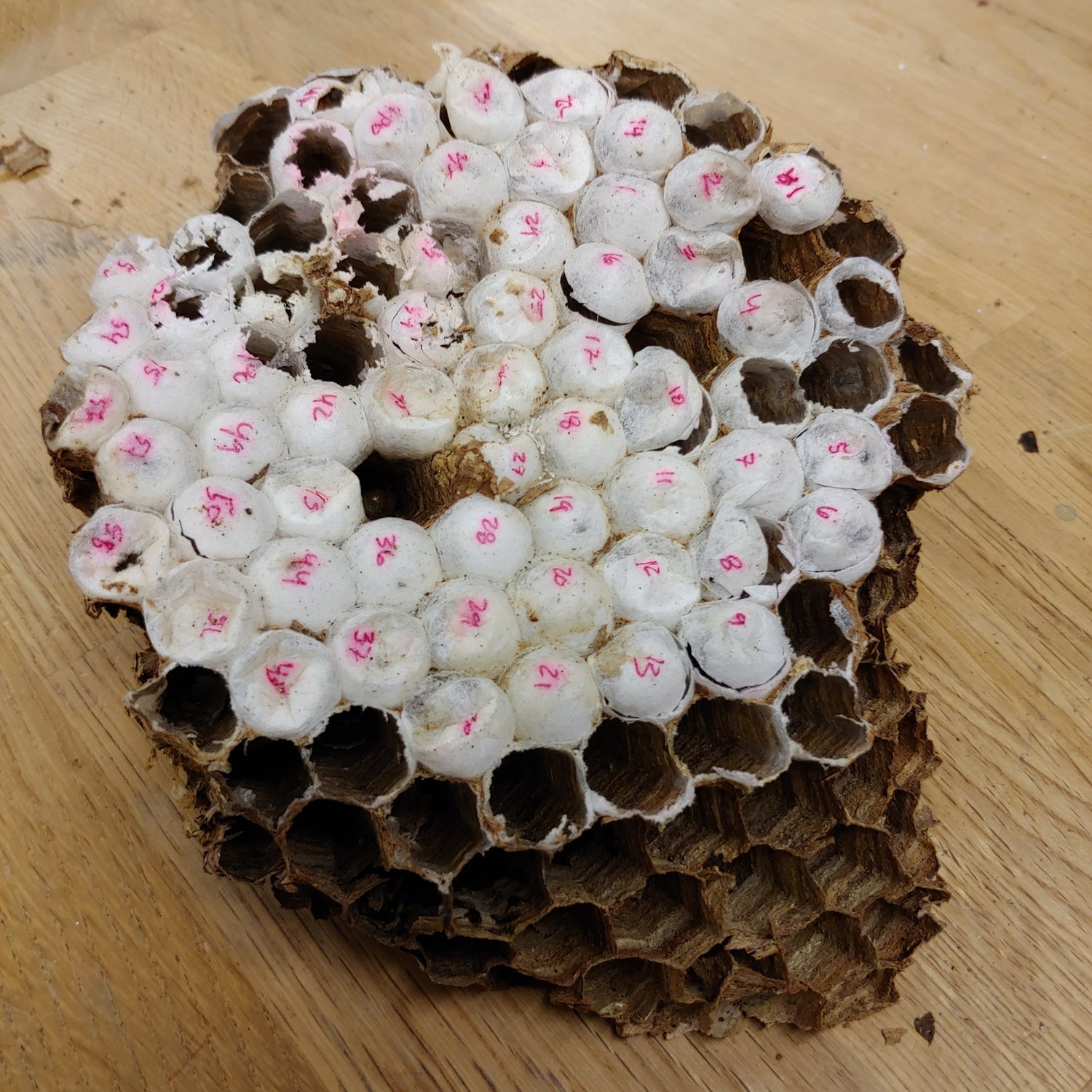 One of the six combs in the first Asian giant hornet nest found in the U.S. The nest will go to the Lynden fair before being displayed in the Smithsonian National Museum of Natural History.
Photo courtesy Ruthie Danielsen 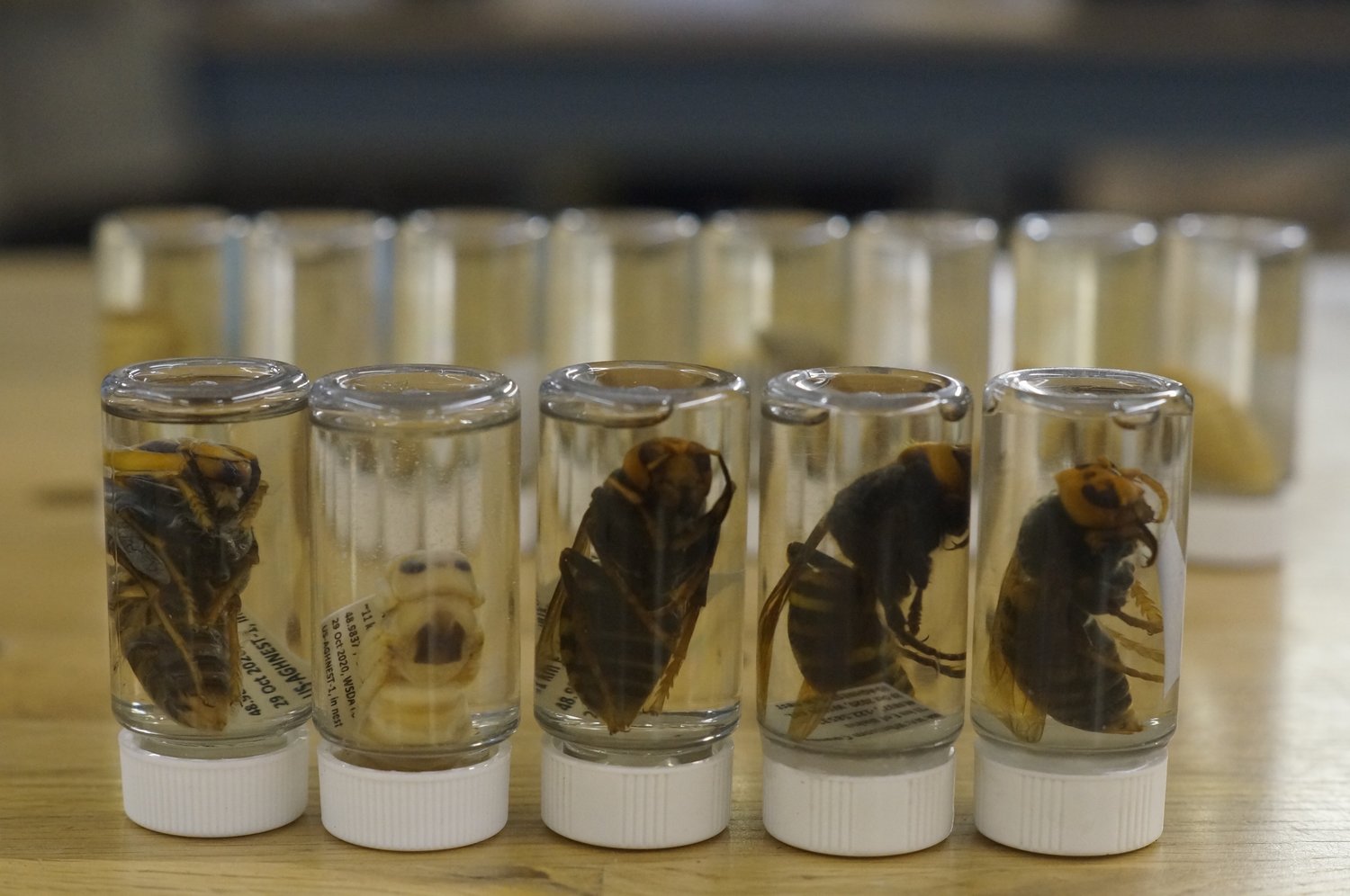 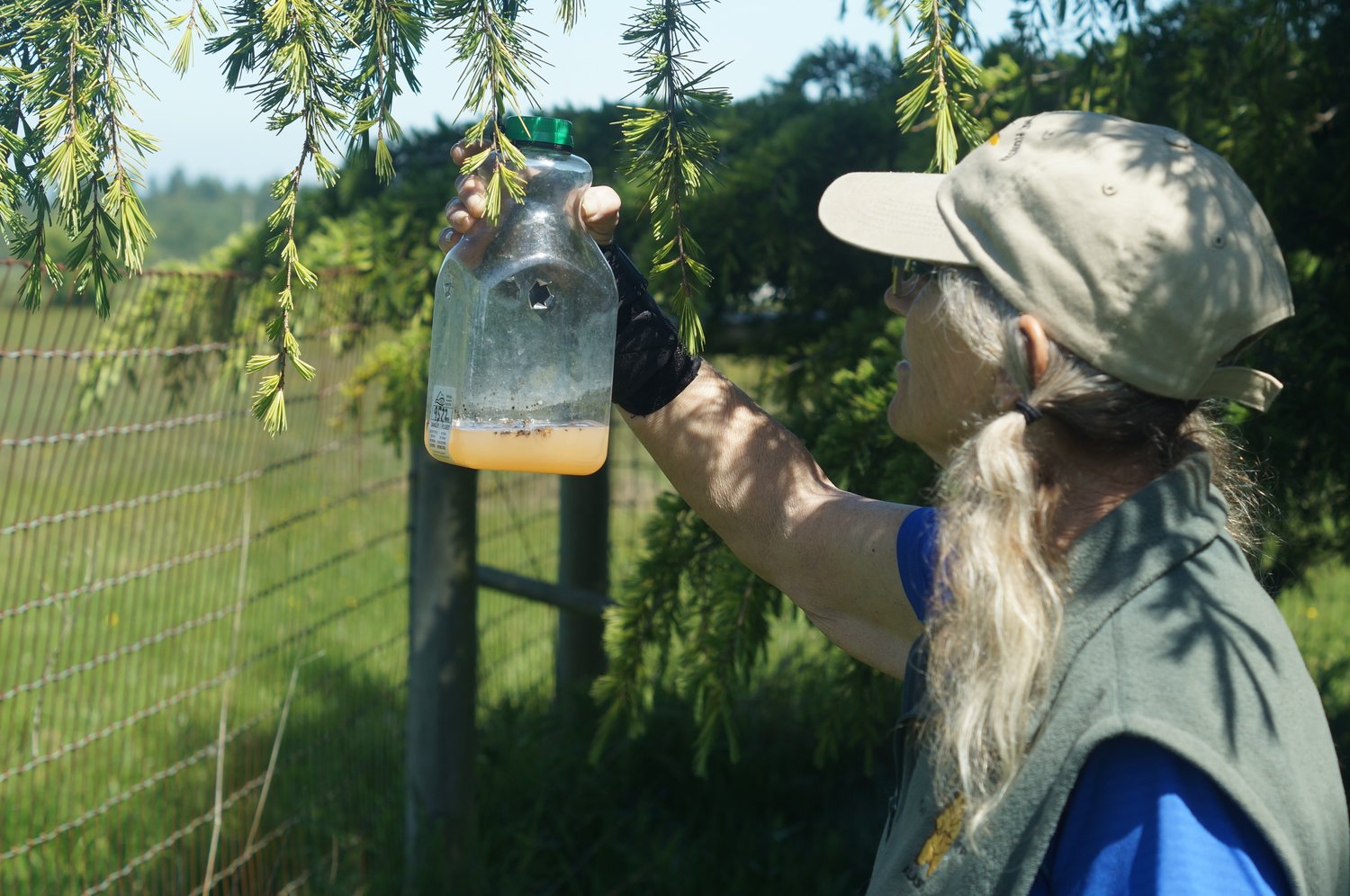 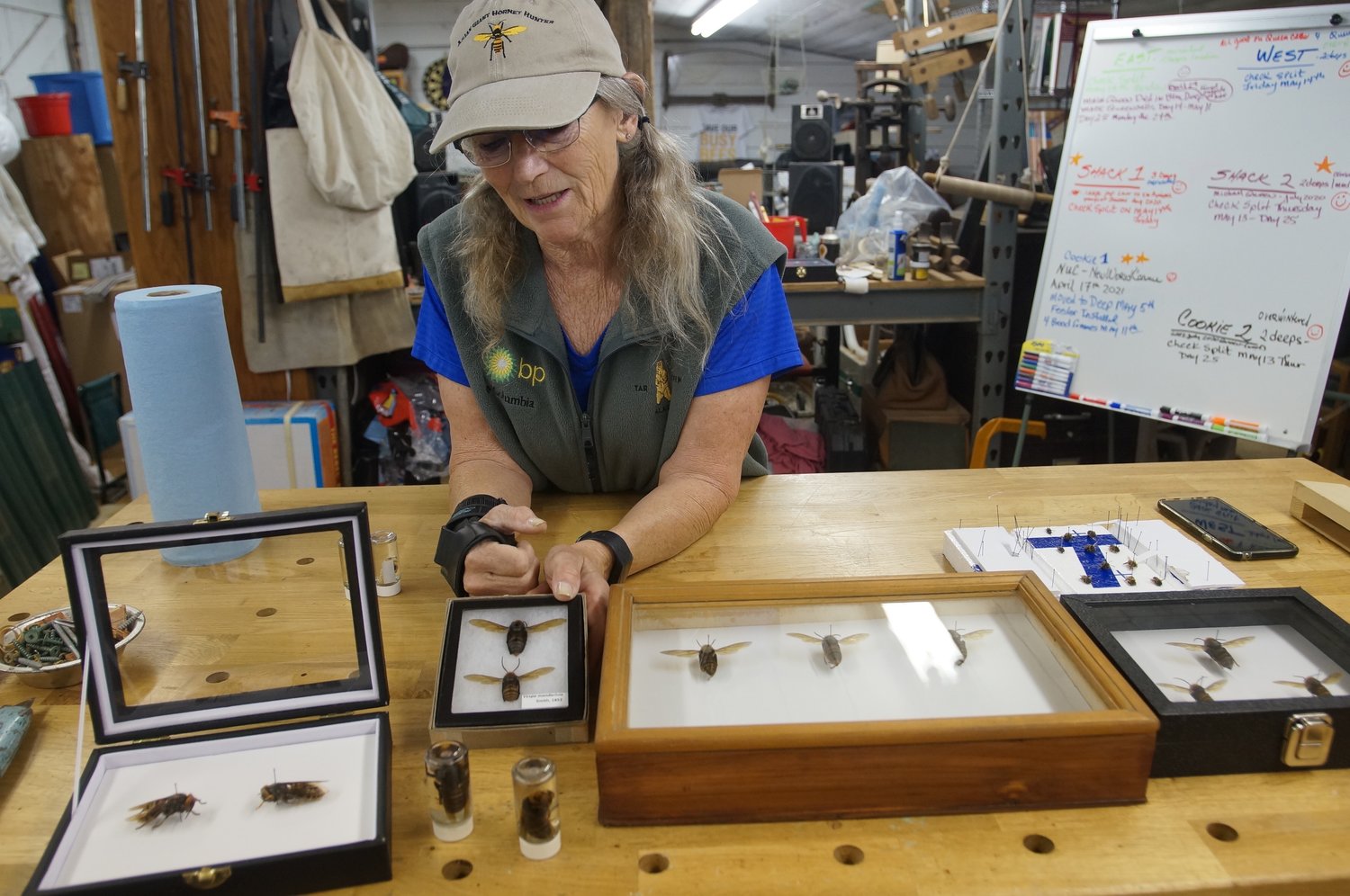 Mt. Baker Beekeepers Association will have the Asian giant hornet nest, the hornets, larvae, pupae and native species for size comparison at the Northwest Washington Fair in Lynden.
Photo by Grace McCarthy 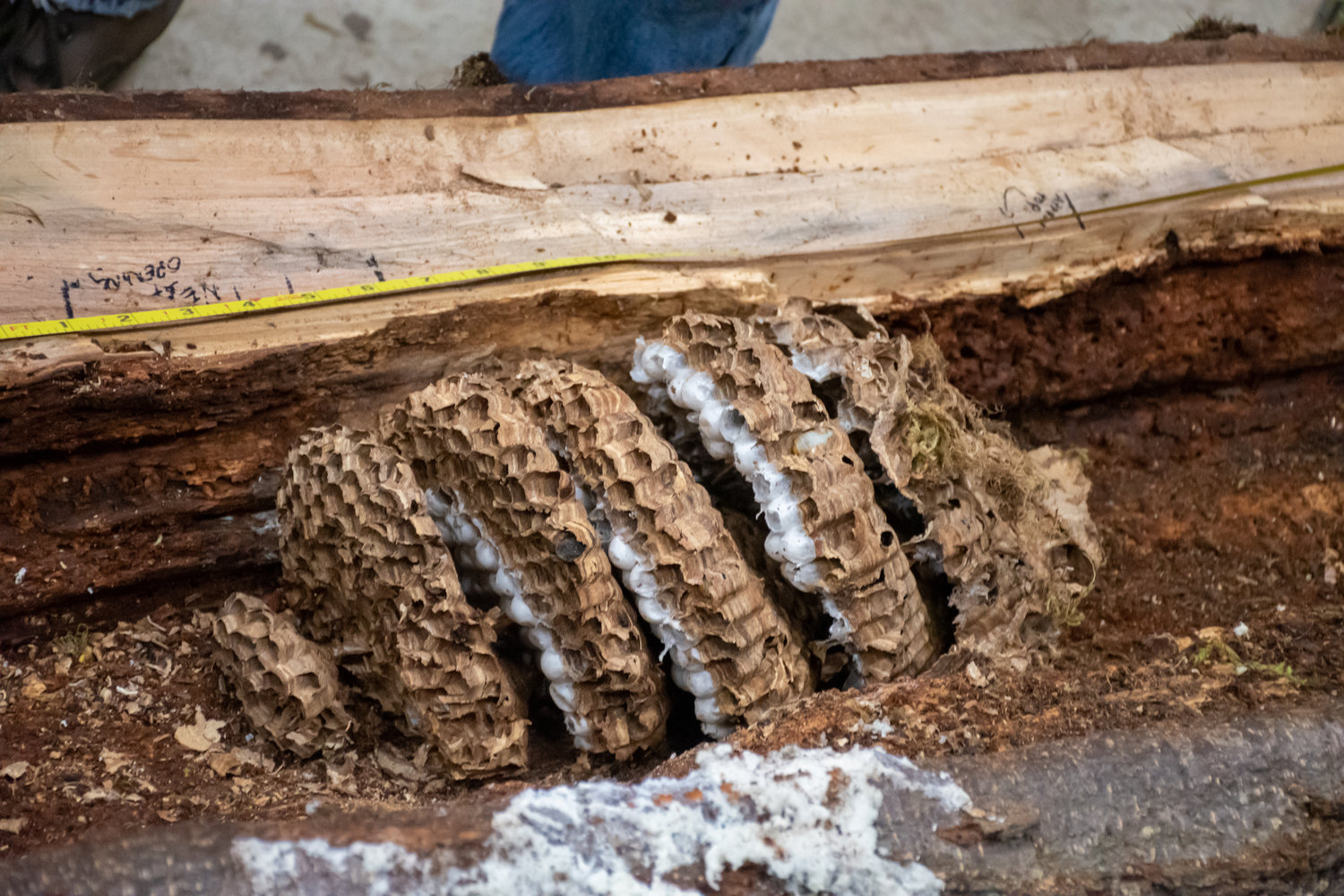 What started with a Facebook message will end in the Smithsonian.

“Hi, I’m Ruthie Danielsen, the beekeeper who organized the trapping for the Asian giant hornet for Whatcom County beekeepers. I understand you have the hornets and the nest discovered on your property and I was wondering what you were selling them for. If you’re interested in selling them, could you give me a call?”

That’s how the first Facebook message went last February. Within two weeks, Danielsen was delicately packing the first nest found in the U.S. in the freezer of her Birch Bay home.

Washington State Department of Agriculture (WSDA) retrieved the hornet nest the next day. Six months of research later, the nest will educate county residents at next week’s Northwest Washington Fair in Lynden before reaching its final destination – the Smithsonian National Museum of Natural History in Washington, D.C. Educating the public to help win the war against the hornet – first at home and then worldwide – motivated Danielsen's acquisition.

“It’s nest zero,” Danielsen said. “That’s the kind of thing you have in the Smithsonian, whether it’s a really big battle or the first woolly mammoth tusk.”

Danielsen, a hobbyist beekeeper with six beloved hives, previewed Discovery Plus’ documentary “Attack of the Murder Hornets” a week before its February 20 release. One of the movie’s filmmakers had rented a Blaine house for the beekeeper, who lacks stable WiFi, to watch the 86-minute documentary before participating in a panel discussion.

Danielsen, featured in the film, knew the storied hunt for eradicating the world’s largest hornet all too well, so most of the documentary came as no surprise. But the last scene proved she didn’t know the ending.

During those final moments, she learned the landowner where the nest was found requested WSDA return the nest and its hornets to him so he could sell them online.

State entomologists clad in space-like suits seized the east Blaine nest as neighbors watched from lawn chairs during the early morning of October 24, 2020. The invasive hornet was discovered nearby just a year earlier, catalyzing a frenzy among scientists and the public to keep the hornet from spreading past Whatcom County. If left uncontrolled, researchers believe the hornet could cause serious harm to honeybee colonies, impacting everything from pollination services to increasing food prices.

The state, residents and beekeepers like Danielsen spent months hanging traps and looking for the apex predators around their sheds, porches and trees.

Danielsen first asked WSDA how she and other members of the local club Mt. Baker Beekeepers Association could help the plight, even before the hornet rippled through headlines.

The beekeeper bonded with state entomologists, hungry to learn about the insect, which she deemed fascinating but destructive. Dressed in an “Asian Giant Hornet Hunter” hat, Danielsen could be spotted around town with a hornet entomologists gave her to educate all who would listen – butchers, grocery store clerks, bank tellers and the neighboring church.

“We have to get humans to care,” said Danielsen, who hopes to bring her hornets to county schools. “Usually when people see these, they have a significant emotional event. They go, ‘Oh my god. I didn’t know they were that big.’”

So, it was only natural that she was crushed when she learned the nest would potentially not be used for education, and instead, sold online. But then Danielsen said she tried to understand the landowner’s perspective – he didn’t own honeybees or invested a year to capture the hornets. The nest was on his property, so he justified they were his.

After watching the film, Danielsen logged onto Facebook and scrolled until she found the landowner, Jaime Polinder. After exchanging a few messages, she was on the phone with the man, who wanted to wait until after the documentary debuted. Danielsen wasted no time after the movie’s release to retrieve her nest, a few queens, pupae and larvae on February 22 after paying a price she won’t disclose.

“I didn’t want him to change his mind,” Danielsen said.

Polinder declined to comment but said he donated the remaining hornets to local beekeepers and kept a few for himself.

The hornet hunter kept her purchase under tight wraps, not even letting WSDA know until it was in her freezer.

Ted McFall, Mt. Baker Beekeepers Association president and owner of McFall Beeyard in Custer, was one of the few let into the secret. McFall was particularly invested in eradicating the hornet after one of his best honeybee hives was the first in the country suspected to be decapitated by the predator in fall 2019.

“She gave me a call and said, ‘Hey, guess what?’” McFall said. “That was a pretty exciting moment for everyone involved in the Asian giant hornet eradication. The nest has huge value and I’m not talking about monetary value. It has great importance for the scientific community.”

McFall describes Danielsen as “a good kind of stubborn.”

“If there’s something that needs to be done, even if it’s impossible, she goes after it,” McFall said. “When a goal seems unattainable most people just throw in the towel, but she is loaded full of energy and just doesn’t quit.”

State entomologists initially rushed to do nest analysis in November before returning it to the landowner, WSDA public engagement specialist Karla Salp said in an email to The Northern Light. Danielsen lending the nest to the state after her purchase allowed researchers at Washington State University to examine and test the nest more, Salp said.

The scientists sequenced the DNA found in the larval hornets’ feces to learn what the hornets were preying upon in addition to honeybees. Such findings included a dragonfly, yellow jackets and paper wasps. Scientists also created a 3D scan of the nest to go online and plastic models for public use.

“Neither of these could have happened without access to the nest after it was acquired by Danielsen,” Salp said. “There wasn’t time to do the scanning during our initial analysis, and we didn’t know about the possibility of analyzing the feces for prey until the nest had left our possession.”

WSDA’s second chance at analyzing the nest highlights why well-preserved biological collections are so important for scientists to revisit as research develops, Salp said.

WSDA returned the borrowed hornet nest to Danielsen in late July. For now, each of the six combs are individually sealed in Tupperware and locked in her workshop. Next week, the nest will be at the Lynden fair, and beyond that, displayed behind a glossy case in one of the world’s most famous museums.

“I wanted to be able to use the nest at our Lynden fair where it’s all of the locals,” Danielsen said. “The hornets are here and the locals are the ones who need to know about it.”

This winter, WSDA staff plan to hand carry the nest to Washington, D.C. to be displayed in the Smithsonian.

“I’m proud I did it,” Danielsen said. “But what’s important is it’s going to be somewhere that’s safe and somewhere that it can be used.”

During the fair that runs August 12-21, the nest will be in the old cow barn where ice cream is usually served. Mt. Baker Beekeepers Association will also have the Asian giant hornets, larvae, pupae and native species for size comparison. Although no hornets have been found this year in the county, the group hopes the nest reminds residents to keep an eye out as workers are expected to emerge in late August.

“Amongst us beekeepers, we call Ruthie a modern-day Indiana Jones because Indiana Jones would find priceless relics and save something to be preserved in a museum,” McFall said. “Ruthie is definitely a hero without a cape.”