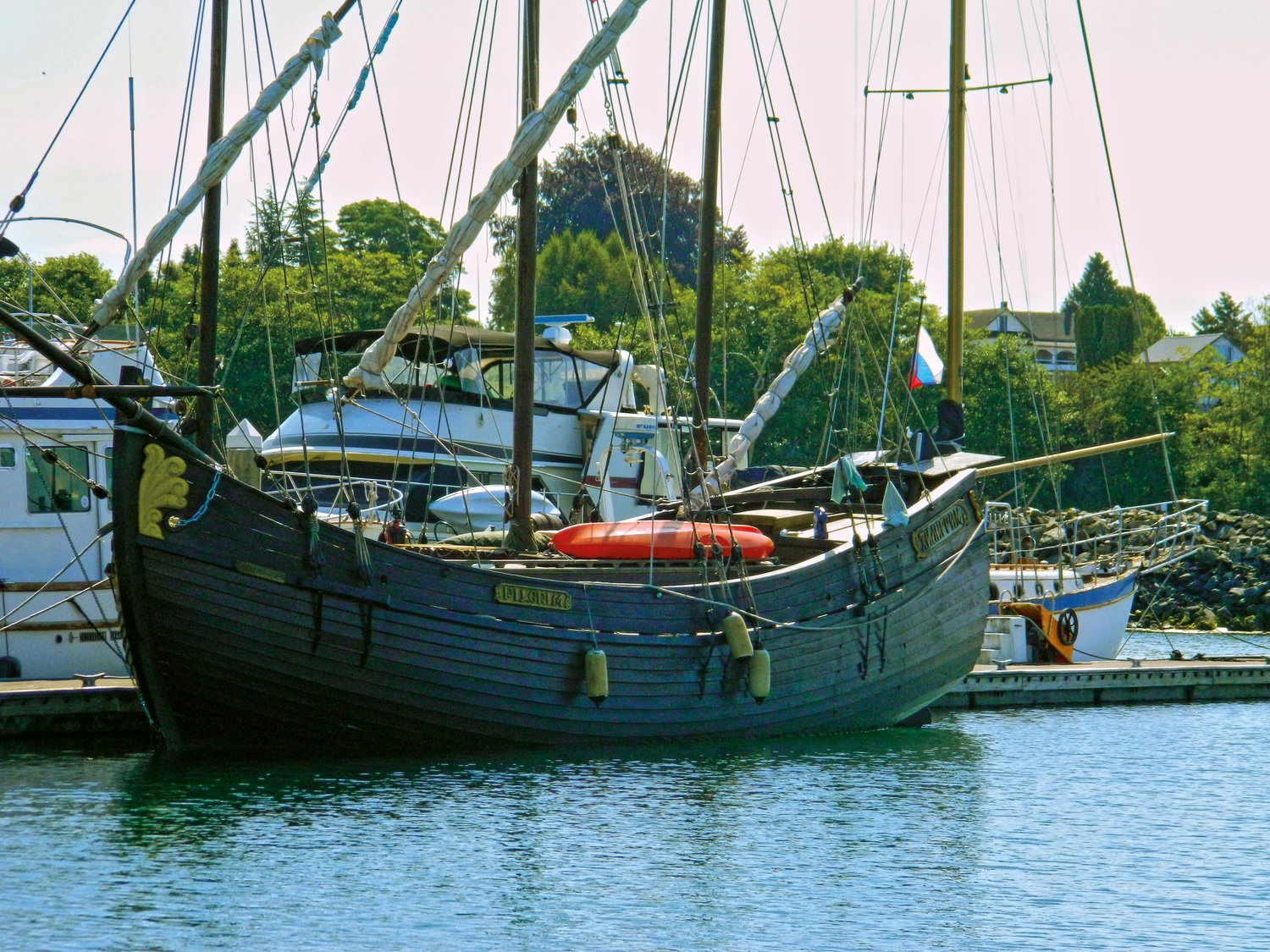 The Russian ship, Pomor lodya “Pilgrim,”docked in Blaine Harbor July 27 before leaving the next morning to complete its around-the-world voyage that began in 2017.
Photo by Ruth Lauman
Posted Wednesday, August 4, 2021 3:38 pm
By Grace McCarthy

Blaine Harbor received an unexpected visit last week from a Russian ship heading home after a four-year voyage around the world. The ship is now en route along Canada, to Alaska and then through the Bering Strait to return where its journey began in western Russia.

The ship’s captain, Sergey Sinelnik, said in a message to The Northern Light that he expected the boat to reach Alaska Thursday, August 5.

Blaine harbormaster Andy Peterson said the ship docked in Blaine Harbor the night of July 27 and left the next morning. After a brief conversation with Sinelnik, the crew gave Peterson a small token.

“Not often do these ships come through, but we have interesting guests,” Peterson said. “This is probably one of the more interesting ones. I wish we had more time to talk with him.”

The 15-ton barque was built in 2016 to be a replica of old Russian fishing and cargo boats that would brave the Northern Sea Route, which ran across northern Russia from the Bering Strait to Grumant, a former Russian town on a Nordic island and one of the world’s northernmost residences.

Pomor trade, which mostly exchanged fish between Russia and Norway, started during the Middle Ages but became established in the 18th century, according to Norway’s Gamvik Museum website. The Russian Revolution ended pomor trade in 1917.

The boat was made to be a floating museum, and has been displayed at art showcases around the world. Onboard the ship are wooden crafts, ship models, Russian Orthodox paintings and photographs of wooden shipbuilding, according to the Historic Boat Pilgrim account.

The wooden ship was made from drawings of an 18th century pomor ship found in Solovetsky Monastery on the Solovetsky Islands in northwest Russia. The boat was built in Petrozavodsk, about 270 miles northeast of St. Petersburg, between 2016 and 2017. On July 22, 2017, the Pilgrim left Petrozavodsk to begin its journey, where it will return four years later.

After leaving Russia, the ship traveled through Europe, down the coast of Portugal, and across the Atlantic Ocean to the Caribbean Islands.

The Pilgrim crew decided the best route for the rest of the trip was to travel to Washington, D.C., through the Hudson River to New York and then into the Great Lakes. Other options debated, according to the Facebook page, included traveling through the Panama Canal to the Galapagos Islands or through the Gulf of Mexico and the Mississippi River.

After traversing New York to the Great Lakes, the ship docked August 31, 2020 in Loon’s Port in Duluth, Minnesota. By the time it reached Duluth, the boat had traveled over 12,000 miles from its starting point.

Duluth, on Lake Superior, was declared the sister city for Petrozavodsk in 1987. In honor of the cities’ ties, Duluth’s mayor named September 9 Lodya Day.

Loon’s Foot Marine owner Zachary Crosby said he considers Sinelnik and his 47-year-old twin brother, also aboard this ship, family after their boat was docked in the marina for nearly a year. Memories like the men jumping into a cold Lake Superior every morning are times Crosby will never forget.

“They’re a marvelous couple of guys. It was great having them here,” he said. “The language barrier caused some interesting times. They’re characters and definitely adventurers.”

On July 6, The Pilgrim’s crew made a three-day, nearly 2,000-mile journey by land to Everett, Washington – but not without difficulty. Laying the large mast proved difficult and the nose didn’t fully fit onto the truck, so the crew decided the best option was to cut it. The ship arrived in Everett July 9 after traversing North Dakota, Montana and Idaho.

After having its three masts stripped earlier while moving through the Hudson River, the ship is finally sailing in its entirety from Washington to Russia.

The Pilgrim’s expedition has received over $2,500 in donations to accommodate for lost sponsors during the pandemic, according to its GoFundMe page.

This isn’t the first time the Sinelnik twins have explored the world. Sinelnik and his brother, Alexander, sailed a 10th century replica ship, the Rusich, from 2010 to 2012. The two were born in Kazakhstan and, attracted to adventure, studied as helmsmen in Russia. A storied career has brought the two on adventures from walking over 600 miles in the western Sahara by foot to sailing 4,500 nautical miles from Australia to Africa, according to their website sinelniki.ru.

That life of adventure, of course, included the barque’s quick stop in Blaine.

“One of the benefits of living in a seaside village,” harbormaster Peterson said, “is the treasures it leaves at your doorstep.”