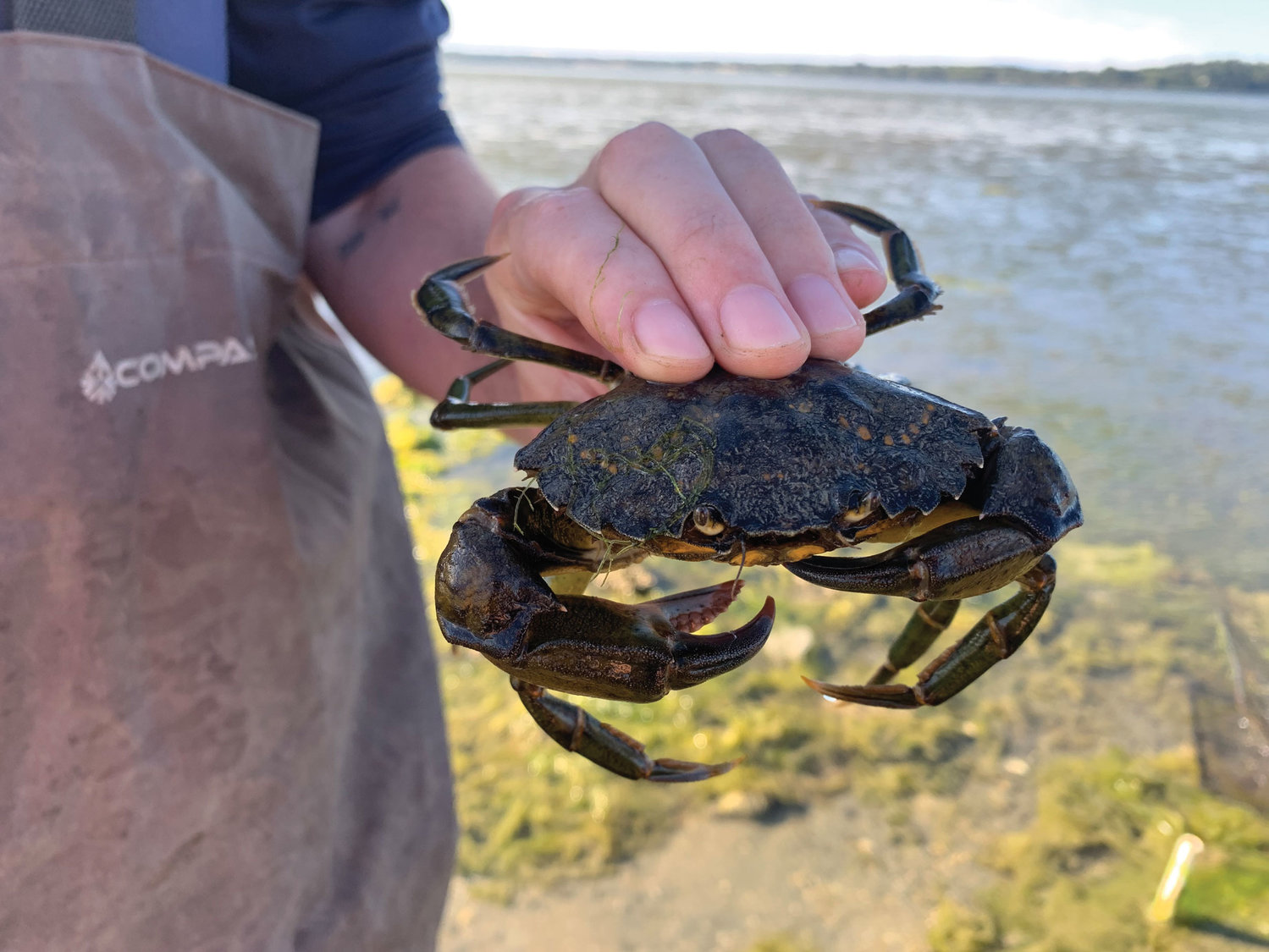 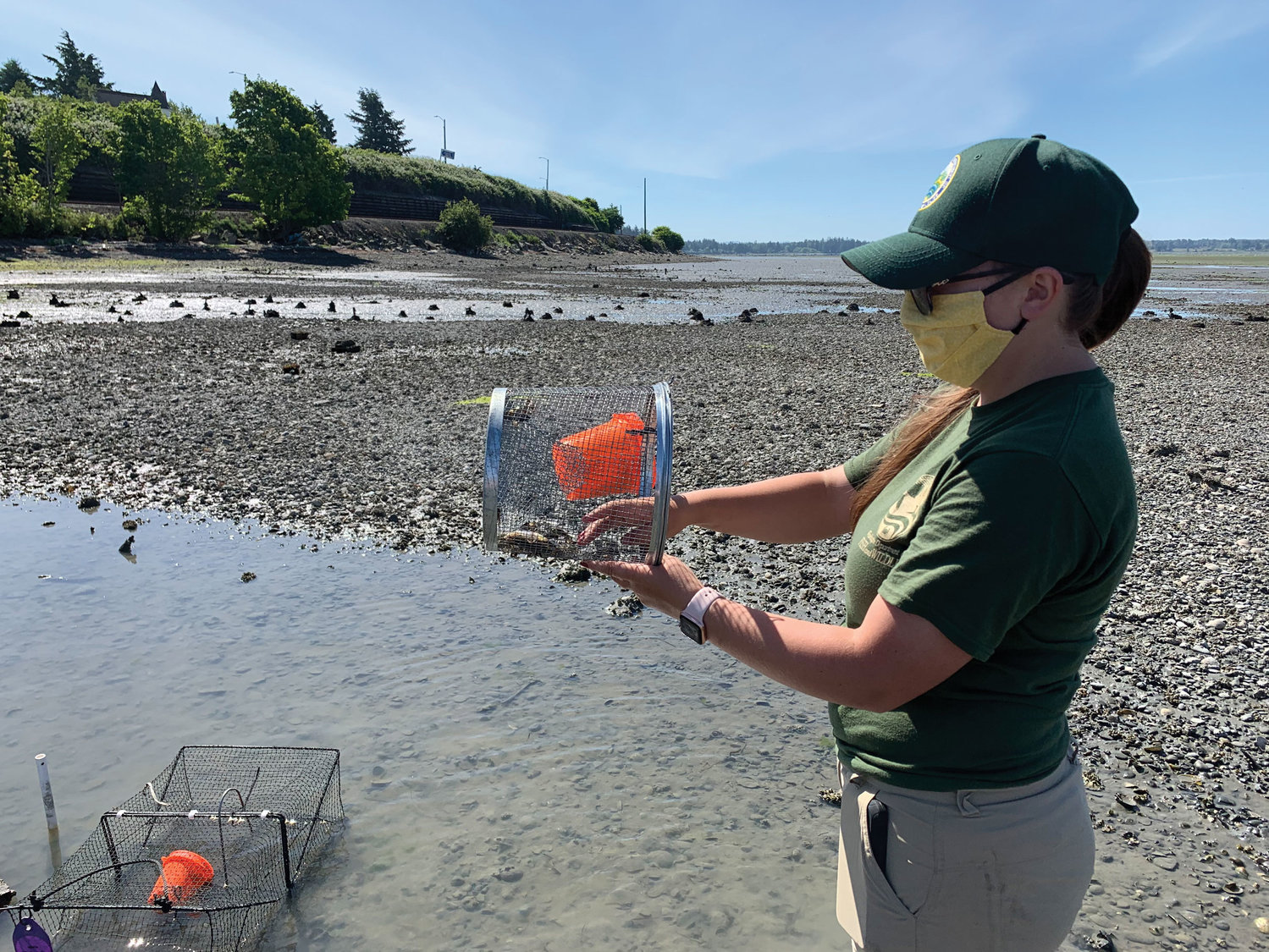 Scientists trapped 33 European green crabs last week, 28 of which were in the mouth of Dakota Creek – one of the highest week’s capture since trapping for the invasive species began in late May.

Allie Simpson, ecosystem project coordinator for Northwest Straits Commission, described the find as “alarming” and said the presence of juvenile crabs in Dakota Creek indicated the green crabs could be settling in the Drayton Harbor area – something an array of environmental agencies are working to prevent.

“We caught a lot, lot more than we were expecting,” Simpson said. “That’s a lot for an area we didn’t know about.”

The crabs caught last week in Dakota Creek were trapped in experimental traps, which were set in different areas to inform the scientists if there are population changes over time. These traps are an attempt to trap as much of the Drayton Harbor shoreline as possible, Simpson said, which requires getting permission from many private landowners on tideland and shoreline.

The first week of trapping this summer yielded the highest number of crabs, at 40, but most weeks only 10 crabs have been trapped, Simpson said. As of September 4, 145 green crabs were caught this summer in the Blaine area.

Emily Grason, a marine ecologist with Washington Sea Grant marine research program at the University of Washington, said in an email that the number of crabs caught is significantly higher than at other locations in the Salish Sea.

Grason said 145 crabs is alarming since it could mean the population is growing, but it’s not enough to cause big ecological impacts for Drayton Harbor.

The green crab is still not the species of crab most frequently caught in the traps. One trap can have 10-100 native hairy shore crabs but it is rare to have multiple green crabs, Grason said, though that’s starting to happen with younger green crabs.

“When we see the numbers shift, and green crab begins to become the dominant crab in the system, we might expect to see detectable impacts of green crabs on native ecosystems,” she said.

The European green crab was first spotted in Drayton Harbor in August 2019. After four nights of trapping dozens of crabs in October and November, the crab’s population raised concern among scientists, who worried the green crab could harm native ecosystems, including Dungeness crab, oyster and clam populations.

Grason said the number of crabs trapped in Drayton Harbor is not unexpected, given the number found last fall. It will take trapping until October to determine how this year’s number compares to last year, she said.

Despite its name, the European green crab is not identifiable by a green shell because the color’s shade can vary and cause it to be mistaken with other native crabs. The best way to recognize the invasive species is by the five triangular spines on the front of its shell, outside the eyes.

Simpson, with the Northwest Straits Commission, said information from the new Dakota Creek trap is still being processed but the scientists hope to create a new core site nearby. The juvenile crab population could have come on the tides as larvae from outside Drayton Harbor or it could indicate there’s a self-sustaining population, she said.

Grason said it will take several years to determine if the Drayton Harbor green crab population is self-sustaining.

Washington Sea Grant is working with Carolyn Tepolt, a researcher at Woods Hole Oceanographic Institute in Massachusetts, who studies population genetics and has the most extensive dataset on West Coast green crab populations, Grason said. Scientists in Washington are collecting tissue samples from crabs in Drayton Harbor, Lummi Bay and Samish Bay to answer a variety of questions, with a special look at the younger crabs.

Understanding more than just genetics is required when determining if the crab population has settled in Drayton Harbor, including decades of climate patterns, Grason said. The impact Drayton Harbor could experience from green crabs, to an extent, doesn’t matter if the crabs are reproduced locally or the larvae are transported. But it matters for management, she said.

“This is the first year we’ve seen ‘young of the year’ pop up at several sites simultaneously, and in large numbers,” Grason said. “That is one pattern that could suggest a longer term residence of green crabs.”

Covid-19 has largely impacted the trapping efforts, Simpson said. In a normal year, large teams of volunteers could cover more territory but now only three to four scientists are trapping the crab at a time.

The pandemic also cut nearly two months of trapping from the schedule, which normally goes from April until October, but didn’t start until the last week of May this year. Simpson said it will take another year to see if not trapping in the spring affected population numbers.

“When we pile on stressors one after another, it becomes harder to tell the impact of any one stressor like a single invasive species,” she said. “But when you subject ecosystems that are already struggling to further insult, you’re working against your other restoration efforts.”